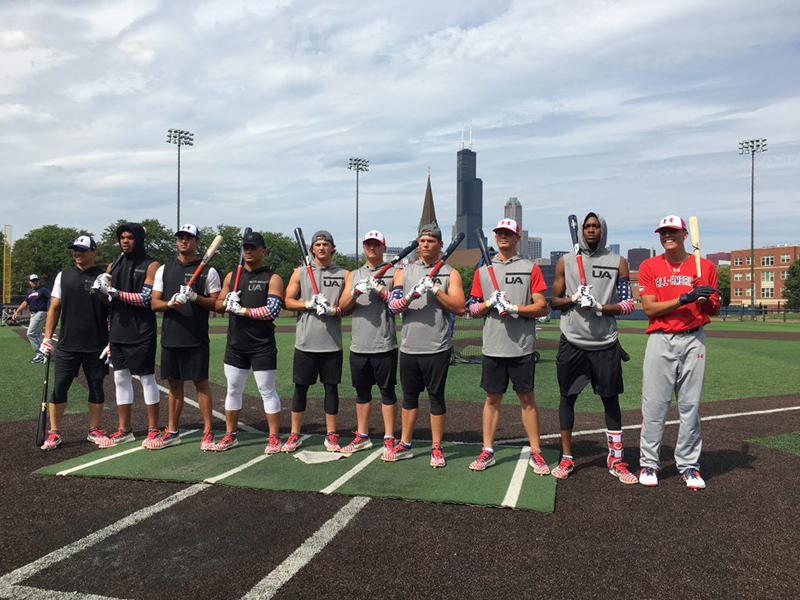 After a preliminary round on Wednesday night at Les Miller Field at Curtis Granderson Stadium on the campus of the University of Illinois-Chicago, ten finalists were chosen to move on to the final round of the 2018 Under Armour All-America Game Home Run Derby, powered by B45. The final round took place on Thursday afternoon.

As always, four players were chosen from the National team as well as four players from the American team. The top home run leader from each team moved on to the finals to square off against one another.

This resulted in a highly touted match-up between Rece Hinds from Niceville, FL and Tyler Callihan out of Neptune Beach, FL. After a great show of power, Hinds was able to pull off a very close 7-6 win. Here is how it all unfolded:

Projectable w/ length & speed, @MylesAustin4 had a good day with the bat & glove. Hit a number of long carrying LD deep over everything in LCF in BP, then got on a roll in HR derby semis w/ more loft to hit 7 & narrowly miss finals #UAAllAmerica pic.twitter.com/ztGpts6F8g

.@tylercallihan1 squared up just about everything in BP. Advanced approach to hit w/ raw pwr. Capable at either corner INF spot #UAAllAmerica pic.twitter.com/OPd9Ug7lFL

Returning for his 2nd #UAAllAmerica game, @BwittJr once again made everything look easy. Consistently barreled balls up in BP from RCF to LF trees, advanced defender at SS pic.twitter.com/m3tRfUCZgQ

Unpacking notes and video clips from #UAAllAmerica workout day. No reason to bury the lead…so leading off with @HindsRece walking off the B 45 Home Run Derby. He defeated @tylercallihan1 in the finals 7-6 @BaseballFactorypic.twitter.com/m8fDkOE9Dt