Let’s take a look at some notable Baseball Factory alums who performed well in last Saturday’s Arizona Fall League Fall Stars Game, won 4-2 by the East squad over the West and other performances from the past few days:

Royce Lewis (Minnesota Twins) – Royce contributed a long, two-run homer in the second inning of the Fall Stars Game as he earned MVP honors in the game. He followed that by being named AFL Hitter of the Week for October 7-13, going 6-for-10 with two doubles and three RBI. The top overall pick in 2017 is hitting an AFL-leading .379 with three homers, 16 RBI and 18 runs scored (which leads the AFL).

Josh Lowe (Tampa Bay Rays) – Lowe is hitting .343 in his last 10 AFL games, with two homers and nine RBI for the Salt River Rafters. He’s also drawn four walks and scored seven runs during that time. On October 9th, he went 2-for-4 with a homer and three RBI. Lowe is seventh in OPS (.937) and his .558 slugging % is fourth-best in the AFL. While he didn’t hit for great average in 2019 with Double-A Montgomery (.252), he reclaimed his status as a power-hitting prospect with 18 homers and 23 doubles. Lowe participated in the Under Armour Memorial Day Classic and Futures South Showcase in 2014.

Jarren Duran (Boston Red Sox) – Duran hit his fourth double of the fall on Wednesday Oct 16, also driving in a run for Peoria. Duran’s batting average is now at .262 for the former Long Beach State OF/IF standout. Duran participated in the 2014 Under Armour Southwest Championships. 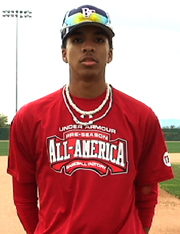 Sterling Sharp (Washington Nationals) – Sharp was the Nationals 22nd round selection in 2016 out of Drury University. He pitched at three levels this season, ending at Double-A Harrisburg, where he capped a strong 2019. He made nine starts, pitching to a 3.99 ERA with 45 strikeouts in 49 2/3 innings. Sharp has pitched 19.0 innings this fall, (second most in the league), making five starts, with a 1.42 ERA for the Surprise Saguaros. In his last start on October 14th, he pitched five shutout innings against Peoria, allowing one hit, while striking out five. Sterling attended a Baseball Factory National Tryout and the Pirate City Christmas Camp and Tournament in 2011 and was a 2012 Under Armour Pre-Season All-American.

Zach Neff (Minnesota Twins) – The Twins selected Neff in the 31st round of the 2018 draft out of Mississippi State University and was dynamite at two levels this season (Class-A Cedar Rapids and High-A Fort Myers), making 38 appearances, with a 2.97 ERA, 89 strikeouts and eight saves. He’s continued his stellar start, pitching well with Salt River, pitching two innings in relief on October 16, striking out three and recording a save. He’s lowered his ERA to 1.69 this fall. Neff attended a Baseball Factory College PREP event in 2012.