The 2018 MLB Draft is off and running with first night draft selections in the books, and Baseball Factory is proud to announce that 45 alums, who attended at least one Factory event, were drafted in the first 78 picks, including the second and third picks and three of the first five selections overall.

In addition, 28 Factory alums were selected in the first round, Compensation Round A and competitive balance round A and 15 former Under Armour All-Americans were first day draft selections as well. Both numbers increased from 2017 (22 first round picks and nine UA All-Americans), respectively. 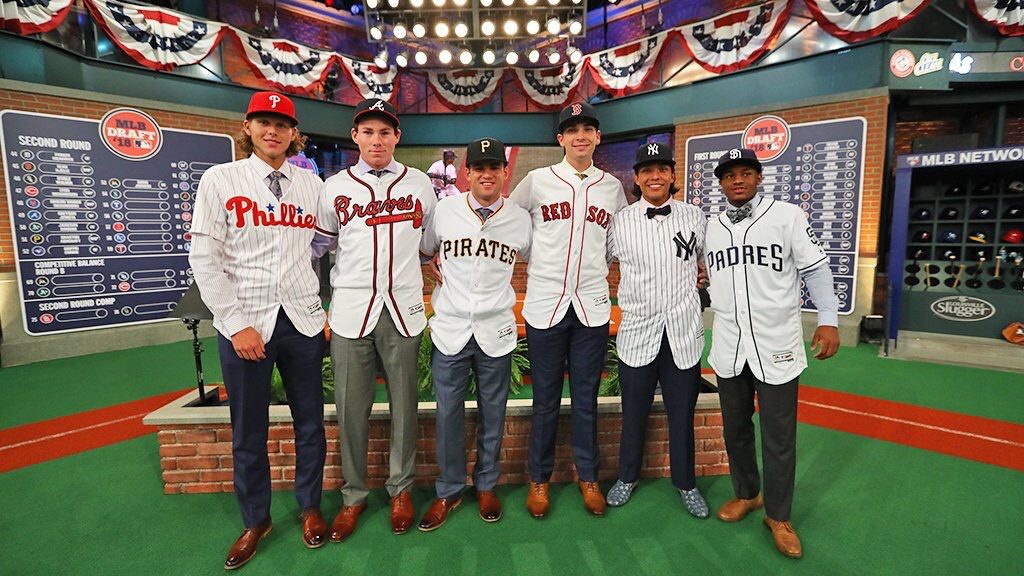 The Detroit Tigers, the team who held the top draft selection will now bank on the potential of a future ace of the organization, the nation’s top collegiate pitcher, Auburn’s Casey Mize went first overall.

Bart, pictured at the 2014 Under Armour All-America Pre-Season Tournament, went second overall to the Giants.

Immediately after Mize, the first Baseball Factory alum went off the board as Georgia Tech’s power-hitting catcher Joey Bart was selected second overall by the San Francisco Giants as they look to Bart as the heir apparent to Buster Posey. Bart led the ACC in hitting with a .359 average to go along with 16 homers and 38 RBI. He was a 2014 Under Armour Pre-Season All-American.

The Philadelphia Phillies were up next at number three and took one of the premier college bats in the nation and a potential infield cornerstone when they selected Wichita State junior third baseman and Baseball Factory alum, Alec Bohm. Bohm, who attended an Under Armour Baseball Factory National Tryout in 2013, upped his home run total as a junior this season, hitting 16 homers to go along with a .436 on-base percentage.

Rounding out the top five was yet another top college bat, playing on one of the top teams still left in the College World Series, Jonathan India. India, who played in the 2012 Team One Futures East Showcase and 2014 Baseball Factory Team One Florida Showcase, was selected fifth overall by the Cincinnati Reds. Still playing in the College World Series, India has increased his power at the plate, smashing 17 home runs, including one after he was drafted last night. 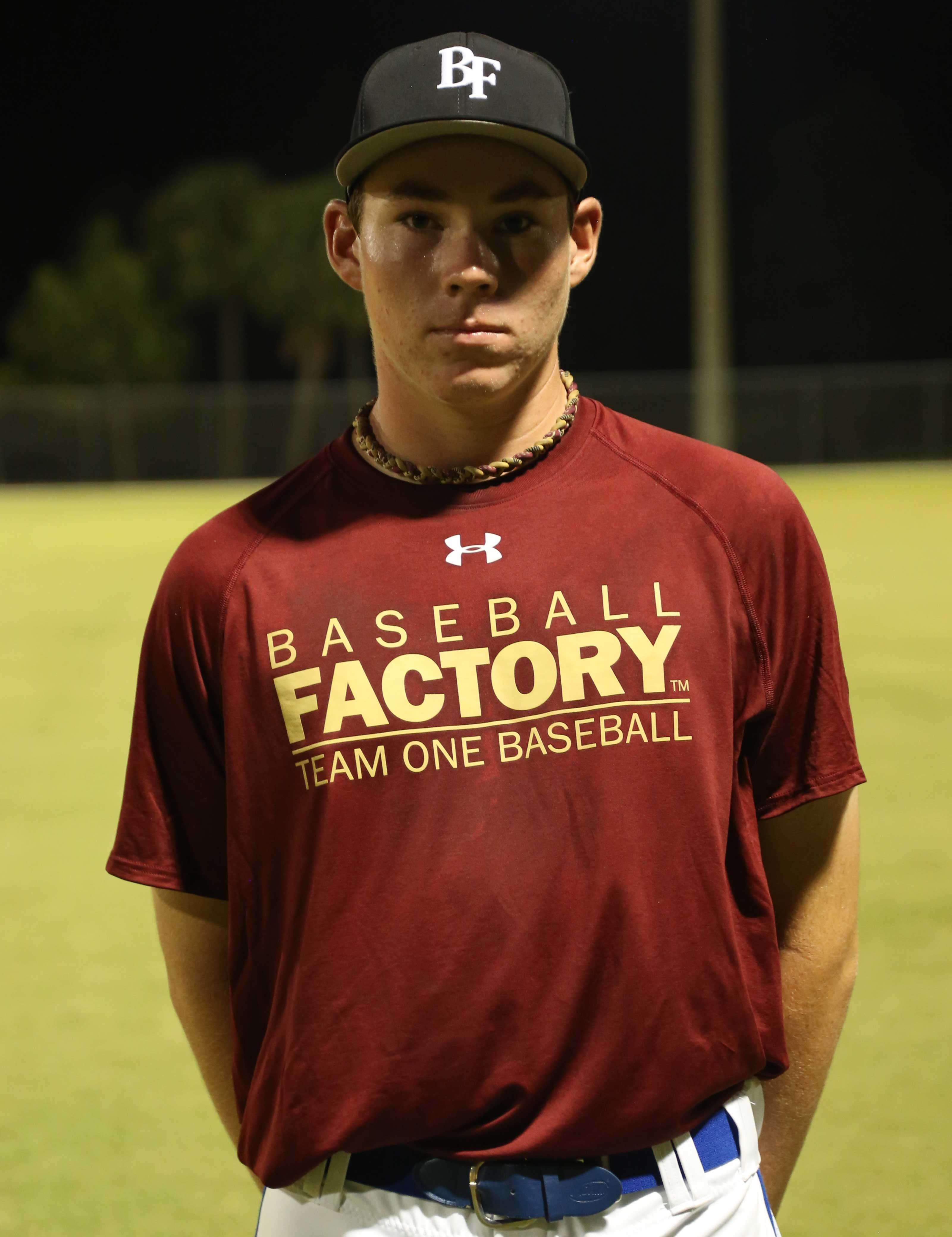 Baseball Factory Futures East alum, Carter Stewart was on the rise as of late and landed at No. 8 overall to the Atlanta Braves after a strong spring season. Stewart possesses a devastating curve ball and has the highest spin rate on his pitch – higher than any major league pitcher in the game today. Stewart struck out 128 hitters in only 61 2/3 innings pitched this season.

Following Stewart was dynamic two-sport athlete at the University of Oklahoma, Kyler Murray. Selected by the Oakland Athletics ninth overall, the organization loved the athleticism of the football and baseball star, which could potentially end up a huge steal for Oakland. Murray, who played in the 2014 Under Armour All-America Game, played very well in the game, doing this after earlier that day, practicing for his high school football team and flying to Chicago for the event.

At 2014 #UAALLAMERICA Game @TheKylerMurray showed ability to balance and excel at both sports. HS FB practice in TX in the am…flight to Chicago…soft toss on the concrete by the concession stand and then a 2-3 performance at Wrigley Field that night. #MLBDraft @BaseballFactory

Baseball Factory College PREP attendee Travis Swaggerty, an OF from South Alabama, went 10th overall to the Pittsburgh Pirates. Hard-throwing RHP Grayson Rodriguez, a 6’5, 230 pound workhorse, went 11th overall to the Baltimore Orioles as they continue to stock pile top prep pitching. Rodriguez played in both the 2015 & ’16 Baseball Factory Futures Texas Showcases. Beginning with pick No. 12 through the 19th pick, six consecutive Under Armour All-Americans were selected. At 12 for the Toronto Blue Jays was Jordan Groshans, who has done numerous Baseball Factory events, beginning with a National Tryout, working his way through to become a Baseball Factory Pre-Season Rookie All-American in 2015, appearances in Baseball Factory’s National East and Futures Texas Showcases, a Pre-Season All-American nod in 2017 and the All-America Game at Wrigley Field last summer.

Following Groshans at No. 13 was Connor Scott (2017 Under Armour All-American) to the Miami Marlins, Cole Winn, 15th overall to the Texas Rangers, Matt Liberatore, 16th overall to the Tampa Bay Rays, Jordyn Adams, 17th to the LA Angels and Nolan Gorman, 19th to the St. Louis Cardinals, all five playing in last year’s exciting All-America Game in Chicago.

I love the @Angels pick of @jordynadams10. Ultra-athletic 2-sport star who walked it off at Wrigley in last summer’s #UAALLAMERICA Game. #MLBDraft @BaseballFactory

Three more talented and dynamic athletes went in picks 23, 25 and 26 respectively, as switch-hitting catcher Anthony Seigler (Futures South and National South Showcase) was selected by the New York Yankees. Seigler has also jumped on the mound as a switch-pitcher as well. Matt McLain (Futures West, National West, 2017 Under Armour Pre-Season All-American) is a shortstop who has performed well against other top talent in Southern California was drafted by the Arizona Diamondbacks and slugging first baseman and two-time Under Armour All-American, Triston Casas was selected by the Boston Red Sox at No. 26.

I absolutely love the @RedSox selection of @mvptc37. The 2-time #UAALLAMERICA may be the best hitter in this entire draft and he’s an outstanding young man! @BaseballFactory #MLBDraft

Please visit: https://www.baseballfactory.com/events to learn more and register for an event near you!