This event offered a unique opportunity to see seven Division 1 commits, all to ACC or SEC programs, on the same field. Not every talented player commits early of course, as evidenced by a trio of standout uncommitted players also on the field with us. 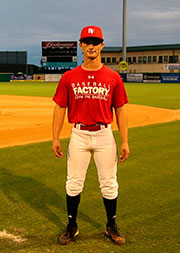 A versatile, highly capable defender with improved speed – he posted 6.72 at this workout, down over two tenths from where we’d seen him the last few times. He gives you hints of it when you see him workout, but when you see him play you are instantly aware of how fast his game speed is. He plays the infield with a sense of urgency, and until this workout had always run better down the line (4.2 range from the right side of the plate) than in the sixty. He generates remarkable carry on his throws from a compact arm stroke and a quick release, and when he lengthens it out from the outfield he can drive throws on a line.

At the plate, his approach is simple and balanced and features a strong, quick move to contact. He controls the barrel very well, and makes surprisingly loud contact. His feel for hitting is evident even in a workout, he sees the ball very well and reacts to it even better. 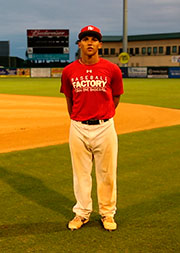 A dynamic talent with ability to throw both right-handed (from the infield) and left-handed (from the outfield and off the mound). His reads and routes in the OF are very good allowing him to maximize range based on his speed. The ball comes out of his hand very well with life, carries through target and is accurate. In the infield he catches all that he gets to cleanly with an efficient exchange and plenty of arm for 2B. Seems to have very good instincts wherever he is on the field – caught all last HS season.

A left-handed hitter who has a natural feel to hit, he makes it look easy and maintains rhythm throughout. His hands are quick and strong and he is very good through impact. When everything works together, he makes remarkably loud contact. His stroke is geared more for hard line drives into the gaps, but when lofted he can hit balls out of any park. 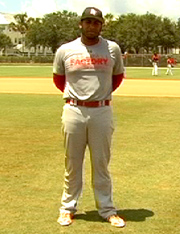 Thick, strong player with right-handed raw power that is hard to find in high school hitters. Launch position has hands low with slightly barred arm, but he generates tremendous leverage through an uphill path to contact and lofts balls a long way. Has HR ability from right center around to left field, with straightaway left field being his biggest comfort zone. He hit several balls out in BP, including one that traveled well over 400 feet.

A versatile defender in search of a home, he can play either corner infield spot and is working on catching. At 3B he showed sure hands and outstanding arm strength across the diamond. He leaned heavily on that same arm strength behind the plate to post release times as low as 2.03.

Lean, wiry frame with long arms. Quality stuff with quick arm. Works from a three quarters arm slot, the ball comes out of his hand well. Four-seamer was 85-88 mph with slight tail, two-seamer was 83-84 with very good tail and sink. Breaking ball has potential as a swing-and-miss pitch, it was 68-69 with two-plane break and good depth. Change was thrown with good arm speed and had late tail and sink action. Effective three pitch mix. Has the pieces of a very effective high-level college arm in future.

Great body/frame, tall and proportioned with ability to add quite a bit of strength. Athletic and fluid actions. Reacts well to balls off the bat at 3B, has natural ability to read hops and get feet into position – and makes it look easy doing it. Offers glimpses of arm strength on backhand plays where he comes over the top and lets it loose, otherwise seems to prefer a lower arm angle on throws across the infield.

Loose left-handed stroke at the plate with a clean path. Relaxed, balanced and mature in the box. With added strength he stands to see a notable change in the authority of his contact, at present he sprays line drives to all fields.

Medium build with proportioned strength throughout, some life in body with some quick twitch actions. Dependable defender at SS with good body control, sure hands and natural actions. Exchange and release are fluid and on time with carry to his throws. Showed good feel around the bag with double play feeds and turns.

Contact, line drive type bat at the plate with a coordinated swing that uses the whole field. Has rhythm and shows the ability to control and manipulate the barrel.

Medium build with some length at 6-foot-1 and 185 pounds. Showed four pitches, all with distinct life and action. Fastball was up to 86-88 mph, two-seamer was 84-85 with late arm side run. Curveball appeared to be his best pitch, at least in this outing. It had sharp 11-5 action in the mid 70s, while his change was thrown 76-78 mph with a fastball arm stroke and had action similar to his two-seamer. His fourth pitch was a 78-81 mph cutter. His arm works very well once it turns over and begins to the plate, and with some work on a more consistent landing he stands to repeat his delivery with more consistency.

Big, physical 2017 player that has a strong mature body. Left-handed bat is carrying tool with a simple, clean stroke that has very good leverage to it. Ball jumps off his bat, he is comfortable driving balls gap to gap with lots of raw power when the ball is lofted. His natural stroke is more suited for deep line drives, where he cuts the ball in half – though he did hit a few big BP home runs. Very few holes in his swing for a young hitter.

Adequate defender at 1B, hands are decent and feet work well enough. He makes adjustments with the glove and has a feel around the bag. He has a chance to have a premium power bat.

An exceptional athlete with a strong body and arm. Projects best on the mound with his low 90s fastball. Low effort balanced delivery, works from a three-quarters slot to generate excellent life. Reached up to 92 but can throw harder. 2-seamer was up to 91 and looked like a sinking/tailing bowling bowl – could get through a lineup with only that pitch. Spins a curveball with very good rotation, change is a work in progress. Has the makings of a mid 90s sinker/slider guy in the future.

Plays SS and has good feet, adequate hands and plenty of arm strength from different slots. Confident and athletic defender, probably best suited for 3B. A left-handed hitter with present strength. Uses lower half well. When in sync it comes off very hard.

A right-handed hitter with lots of natural rhythm, he’s impressive with the bat. Bat waggle at launch generates serious whip through the zone. He makes an aggressive full swing with ability to manipulate the barrel to the ball, hits ball to all fields but mainly from CF to LF. As he fills out his tall, lean frame he should see power gains – giving him a legit hit / power combination.

He makes plays at SS thanks to dependable hands and clean exchange. Arm has carry and he can can make throws from different angles. A little younger with the glove than with the bat, but he is worth a longer look at shortstop.

The Under Armour Baseball Factory National Tryout Tour is rolling through all 50 states. Tryouts are held for players ages 12-14 and 14-18. Don’t miss your opportunity to be discovered.