Alumni Notebook: 2009-2011 Under Armour All-Americans Now In The Pros

With the 2016 Major League Baseball Draft less than a month away, we’re looking at former Under Armour All-Americans who have since been drafted by Major League teams and having success at the level they are playing at. Steve Bernhardt, Executive Vice President of Baseball Operations for the Factory provides information on the Factory alumni. 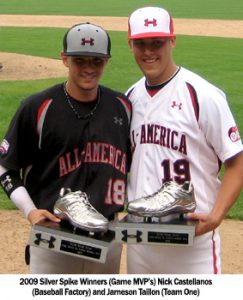 Nick Castellanos & Jameson Taillon – In the lead-up to the 2009 Under Armour All-America Game, current third baseman for the Detroit Tigers, Nick Castellanos won the Home Run Derby over Stetson Allie to claim the title and it wouldn’t be the only hardware he would take home that weekend.

Castellanos had a day to remember, going 4-for-4 with four doubles, a walk, a stolen base and the Silver Spike MVP award for Baseball Factory. On the opposite side, Jameson Taillon claimed the Team One Silver Spike MVP award in his own dominant performance. Facing the top of Baseball Factory’s line-up, Taillon struck out all three batters he faced with a fastball that touched 95 mph and a breaking ball that fooled hitters. In the end, Baseball Factory defeated Team One by a final of 11-to-6 that afternoon.

Castellanos is having a fantastic 2016 season, currently leading the American League with a .380 average with six doubles, a triple, six homers and 26 RBI, both categories lead the Tigers. He’s also scored 14 runs and is slugging .620, which is fourth-best in the AL.

After missing the last two seasons, Taillon is now at Triple-A Indianapolis and knocking on the door to the bigs, by posting a 1.69 ERA through his first six starts in 2016. He’s 2-1 and has struck out 32 batters in 37 1/3 innings and holding opponents to a .182 batting average. 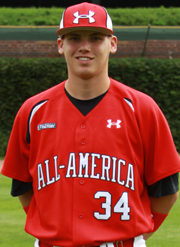 Rookie Davis – Davis was a member of the National team at the 2010 Under Armour All-America Game that lost to the American team, 7-0. Davis was a 2010 Team One South participant before being selected to the nation’s premier event at Wrigley Field.

Davis was selected by the New York Yankees in the 14th round of the 2011 MLB Draft out of Dixon High School in Holly Ridge, NC and spent four seasons in the organization before he was dealt to the Cincinnati Reds in the Aroldis Chapman trade this past 0ff-season. Rookie has followed up an 8-7 season in 2015 where he pitched to a 3.86 ERA with 129 strikeouts in 130 1/3 innings pitched with an outstanding start to his 2016 season.

So far through five starts at Double-A Pensacola, Davis is 3-1 with an 0.93 ERA, fourth best in the Southern League. His 0.83 WHIP is league-best and he’s holding opponents to a .196 batting mark. Rookie is a dominating presence on the mound (6’5″, 245 pounds) and looks to quickly move up the Reds organizational ladder this season. 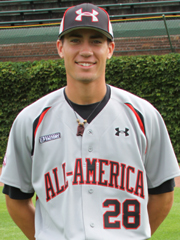 Nicky Delmonico – Delmonico was part of the American ball club that won in 2010 and a year later, was the Baltimore Orioles sixth round selection in the Draft out of Farragut High School in Knoxville, TN.

After spending almost two seasons in the Orioles organization, Delmonico was traded to the Milwaukee Brewers for Francisco Rodriguez and spent the rest of ’13 and all of 2014 with the Brewers organization.

Receiving a fresh start from the Chicago White Sox, the team signed him before the 2015 season and is now at Double-A Birmingham where he’s hitting .352 with four homers and 16 RBI (good for second-best in the Southern League). He’s also leading or near the top in other major offensive categories through 24 games for the Barons; 11 doubles (league-best), 56 total bases (second-best), sixth-best in OBP (.424) and tops with OPS (1.061). 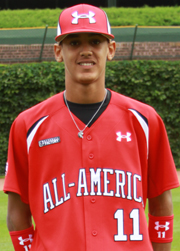 Ronald Guzman – Native of La Vega in the Dominican Republic, Guzman was a member of the National Team and the first baseman is tearing up the Texas League this season for the Texas Rangers.

Guzman is a big-time prospect and is leading the way for Double-A Frisco this season, hitting .356 (second-best in the Texas League), with seven doubles, a triple, five homers and 18 RBI. His 20 runs scored (seventh-best) and his .420 OBP is tops in the league. His 1.014 OPS is fourth-best for the RoughRiders who are currently 23-7 this season. 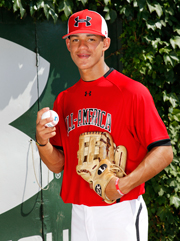 Jose Berrios – Berrios shined brightly for the National team in the 2011 All-America Game as they defeated the American team, 6-4. He’s continued to shine after being drafted 32nd overall in the 2012 Draft by the Minnesota Twins.

After going 38-20 with a 2.91 ERA in three minor league seasons, Berrios was promoted to the major leagues to make his first start on April 27th against the Cleveland Indians. He gained his first win in his last start on May 2nd against the Houston Astros, going 5 1/3 innings, allowing three hits, two earned runs and striking out eight in the 6-2 victory. 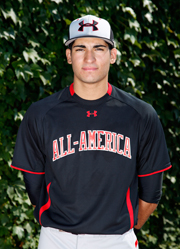 Nick Basto – Basto is an outfielder, third baseman and short stop in the Chicago White Sox organization and was a fifth round pick in the 2012 Draft from Archbishop McCarthy High School in Southwest Ranches, FL.

Basto who was on the American squad in the ’11 game, got off to a white-hot start at High-A Winston-Salem to begin the season, hitting .345, which is still fourth-best, even after his promotion. His 41 hits were second-most and he collected seven doubles, a triple, five homers and 18 RBI in 30 games. He also scored 18 runs and walked 10 times.

He was promoted on May 9th and in his first game, went 2-for-5 with an RBI for Double-A Birmingham. 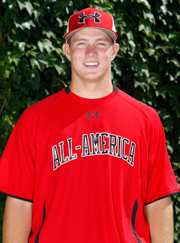 David Thompson – Thompson was part of a group of powerful hitters in the 2011 All-America Game, advancing to the Finals of the Home Run Derby on that Saturday at Wrigley Field. He was originally a 38th round selection by the New York Yankees but decided to pursue his college academics and attended the University of Miami to play baseball. Last year, Thompson was a fourth round draft pick by the New York Mets and hit 10 doubles, a triple and three home runs in 59 games with short-season Brooklyn.

This season at Single-A Columbia in the South Atlantic League, Thompson is having a huge season, showing the type of power we saw in Chicago five years ago. Thompson is hitting .301 with 12 doubles, a triple, three homers, 35 RBI, 27 runs scored and 10 walks.