We will be in 10 different locations this weekend with our National tryout tour! ⚾️ Click the link below to get out and get seen. Registration closes at midnight! 🕛 👀 baseballfactory.com/national-evalu… pic.twitter.com/lpkgKPFHZC

Alumni Notebook: 2013 Under Armour All-Americans At The Next Level

The 2016 Major League Baseball Draft is fast approaching, and we’re looking at former Under Armour All-Americans who have since been drafted by Major League teams and having success at various levels in professional ball as well as the collegiate ranks. Steve Bernhardt, Executive Vice President of Baseball Operations for the Factory provides information on the Factory alumni. 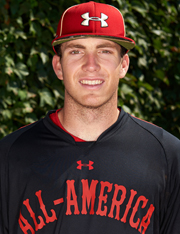 Luke Dykstra – Strong major league bloodlines here for Luke, the son of former major league outfielder, Lenny Dykstra who played 12 seasons (five with the New York Mets and seven with the Philadelphia Phillies) won a World Series championship in 1986 with New York and was a career .285 hitter.

Luke came to Wrigley a power hitter and the ball jumped off his bat with as much life as any hitter we saw that weekend. In the game, Dykstra walked and singled in three plate appearances, both balls in play were hit hard and hit off of breaking balls.

Dykstra was drafted in the seventh round of the 2014 MLB Draft out of Westlake High School in Westlake Village, CA and after splitting 2015 between rookie-level Danville in the Appalachian League and Single-A Rome where he hit a combined .318, Luke began 2016 at Rome, where’s he played in 39 games (all at second base) and is currently hitting .313 (good for eighth-best in the SALLY League) with 10 doubles, 22 RBI and five stolen bases. 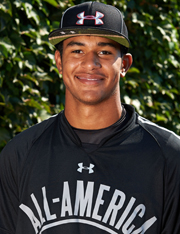 Jacob Gatewood (@Jake_Gatewood2) – We first got a glimpse of Jacob way back in April of 2011 at an Under Armour Baseball Factory National Tryout in Costa Mesa, CA before making an appearance at the 2011 Under Armour Southwest Regional Tournament. The Clovis, CA native then joined us in Arizona for the 2012 Under Armour All-America Pre-Season Tournament.

At the 2013 All-America Game, Gatewood put on an impressive power display in Chicago, winning the Home Run Derby over fellow All-American, Chase Vallot at Wrigley Field. The ball was absolutely jumping off his bat as he deposited shot after shot onto Waveland Avenue. His defense in the outfield and overall arm strength was rated very highly by our coaches and scouts during the previous day’s Player Workout. During the game, Jacob doubled and drove in a run in five AB’s.

The 41st overall selection by the Milwaukee Brewers in 2014 out of Clovis High School, Gatewood also split time between rookie ball and Low-A level in 2015. At Rookie-Helena, Gatewood hit .274 with 23 doubles, six homers and 41 RBI in only 54 games before moving to Wisconsin, where he hit only .209 but blasted four homers with 16 RBI.

This season out of the gate at Low-A Wisconsin, the 6’5″, 190 pound Gatewood is comfortable with his defense at short for the Timber Rattlers and hitting the ball well, with seven home runs (second-best in the Midwest League) with nine doubles and 23 RBI. 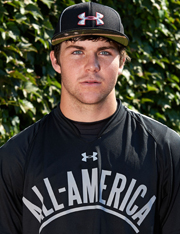 Michael Gettys – The San Diego Padres second round selection in 2014 out of Gainesville High School in Gainesville, GA, started in CF during the ’13 game and reached base twice in five trips, stealing two bases and driving in a run. Another player with strong bloodlines as his younger brother, Jonathan was a 2015 Under Armour All-American.

Gettys is putting together a fine season in the Midwest League, near the top of most offensive categories. Playing for the Fort Wayne TinCaps, Gettys is hitting .301 with seven doubles, three triples, a home run, 18 RBI and 25 runs scored. He’s been a nuisance for pitchers on the base paths too, swiping 17 bags, good for second-most in the Midwest League. 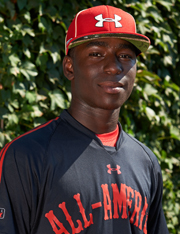 Nick Gordon (@FlashGThe3rd) – Gordon was selected fifth overall by the Minnesota Twins in 2014 out of Olympia High School in Orlando, FL and is the son of former major league closer, Tom ‘Flash’ Gordon.

The dynamic Gordon flashed his tool set at the All-America Game, who was thought by many that week as the best high school player in the country. He had an outstanding box-score line during the game, going 3-for-4 with two RBI, a run scored and a stolen base. Late in 2012, we saw Nick at the Team One Futures Series East event where he showed the makings as a top pick in the ’14 Draft.

Selected near the top by the Twins, Gordon has not disappointed, hitting .294 in 2014 at rookie-level Elizabethton and .277 with 79 runs scored, 23 doubles, seven triples and 25 stolen bases at Low-A Cedar Rapids in 2015. This year, he’s advanced to High-A Fort Myers where he is hitting even better, sitting within the Top 10 in average (.308) with eight doubles, two triples, two homers, 16 RBI and six stolen bases. 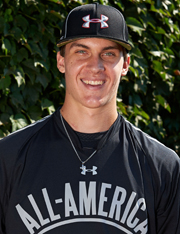 Carson Sands (@southpawsands) – We turn our attention to a talented pitcher who threw in the low 90’s with his fastball during the All-America Game and flashed two breaking balls, one that had a downward break, sitting low 70s and a similar pitch that was in the upper 70s as well.

The Tallahassee, FL native showed a balanced and under-control delivery during his outing, going 1 1/3 innings, striking out three, walking one and allowing one hit.

Drafted in the fourth round by the Chicago Cubs in 2014 out of North Florida Christian High School, Sands is dominating Single-A South Bend so far in 2016. In six starts, the lefty is 4-0 with a 3.26 ERA, striking out 20 batters in 37 1/3 innings. Sands also attended an Under Armour Baseball Factory College PREP event in Tallahassee in April of 2013. 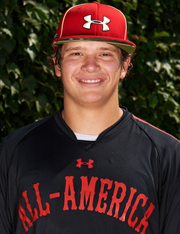 Chase Vallot (@Chase_Vallot) – Vallot, as we mentioned earlier in this writing, was the runner-up to Jacob Gatewood in the Home Run Derby in Chicago, and the Youngsville, LA native also flashed a plus arm behind the plate, recording his best pop time of 1.9 and blocked balls extremely well.

Selected one pick before Gatewood in the 2014 Draft (40th overall) the Kansas City Royals snagged a dynamic all-around athlete from the catching position and he has showed promise ever since.

At just 18 years of age in 2015, Vallot hit 13 homers in 80 games at Single-A Lexington, but its his high average in 2016 that has the Royals organization excited. This season in Lexington, Vallot has hit and hit well, posting a .283 batting mark, with seven homers (tied for fourth-most in the SALLY League) and 20 RBI. 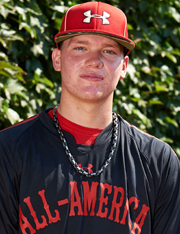 Pitching was the name of his game then, and he excelled, allowing no runs and no hits, striking out one in his inning of work. At the plate, he knocked in a run on an opposite-field double, solidifying his status as one of the best two-way prospects at the time.

The Los Angeles Dodgers second round selection out of Sahuaro High School in Tucson, AZ, Verdugo is now strictly an outfield and hitter and very good at both. He’s handled and adjusted to Double-A pitching very well in 2016, hitting .297 at Tulsa with seven doubles, seven home runs and 25 RBI. He’s also 10th in the Texas League in OPS at .825. 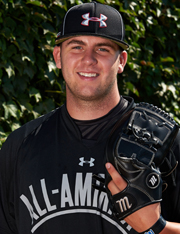 Alex Lange (@Lange_17) (LSU) – Lange, a native of Lee’s Summit, MO is a stud at LSU, was a 2015 First-Team All-American by Baseball America, should be honored again as such and should be drafted very high when the 2016 MLB Draft kicks off in June.

Lange struck out two in his inning of work at the ’13 game, throwing a low 90s fastball as well as a get-me-over breaking ball in the upper 70s, that flashed plus as did his low 80s variation that was his out pitch.

He’s got statement wins under his belt in 2016, collecting victories over Vanderbilt and Ole Miss and is 7-3 with a 3.63 ERA with 96 strikeouts in 91 2/3 innings pitched. He’s also collected two complete games and is holding opponents to a .226 batting average.