Each week in the Alumni Notebook, we will take a look back at the previous weekend’s action in College Baseball and bring you the latest on Baseball Factory alumni who are helping their teams with outstanding play. Steve Bernhardt, Executive Vice President of Baseball Operations for the Factory provides information on the Factory alumni.

Luken Baker (TCU) – The 2014 Under Armour All-American is off to a hot start for TCU in his freshman season as he helped the Horned Frogs (6-1) in victories over Louisiana-Lafayette, Rice University and the University of Houston at Houston’s Minute Maid Park, home of the Houston Astros.

At the plate, Baker went 4-for-9 with five runs, two doubles, a homer and four RBI. He’s now homered in two consecutive starts on the mound. On the bump against Rice on Saturday, he picked up his second victory, shutting out the Owls over six innings, scattering four hits and striking out seven.

Zack Collins (Miami) – The 6’3″, 220 pound catcher from Pembroke Pines, FL went 2-for-4 on Saturday night in the team’s 5-3 victory over #1 ranked and previously undefeated Florida Gators. Collins is second on the team in average (.316) with three runs scored, five RBI and a team leading 10 walks. Collins was a 2010 and 2011 Team One Futures participant and attended the 2012 Under Armour All-America Game. 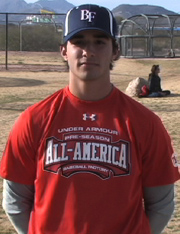 Johnny Ruiz (Miami) – Collins’ teammate in the infield is one of the best hitters in all of college after seven games, helping to lead the Hurricanes to a 5-2 record through February 28th with his hot bat. In the victory over Florida, Ruiz went a perfect 3-for-3 and is now hitting .478 with three doubles and a team-leading 11 RBI which is good for Top 10 in Division I currently. Defensively, Ruiz has yet to commit an error at short stop, turning four double plays with 21 putouts in 37 chances. Ruiz attended an Under Armour Baseball Factory National Tryout in Davie, FL in November, 2011 and was a Pre-Season All-American in 2012.

Ty Culbreth (Texas) – The senior left-handed pitcher has been “Texas Tough” after his first two starts to the season for the Longhorns. The former 2011 Under Armour Pre-Season All-American has won two of the team’s first four games, sporting a 0.69 ERA after spinning eight impressive shutout innings against Stanford on Saturday night. In the 9-0 victory, Culbreth allowed just two hits and struck out 12 and walked none. Culbreth is third in the Big 12 in ERA and leads the conference in strikeouts and is holding opponents to a .136 batting average. 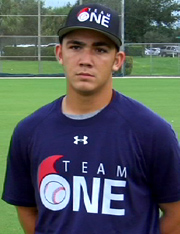 John Jones (South Carolina) – After a solid freshman season at State College of Florida where he hit .340 with 23 doubles and 37 RBI, the power-hitting catcher has gotten off to another hot start with an unreal weekend in a weekend-sweep of Penn St, as the Gamecocks are now off to an 8-0 start. The 2012 Team One Futures East participant, went 4-for-4 on Friday with a homer, four RBI and a walk. On Saturday, his one official plate appearance was a grand slam as he collected four walks, scoring three times. Finishing it off on Sunday, he went 3-for-3 with a walk and two RBI. 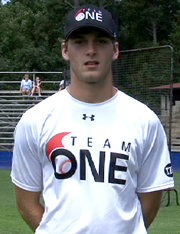 Heath Quinn (Samford) – The 2012 Team One South participant is putting together ridiculous numbers at Samford in his junior season as the Bulldogs are off to a 5 and 3 start. Quinn leads the team in average (.545), runs (13), home runs (7) and RBI (18). Over the weekend in a four-game series with BYU, Quinn went 8-for-17 and went completely off on Saturday in the team’s 10-5 victory, belting three home runs, one a grand slam, and seven RBI.

Hunter Tackett (NW Florida State College) – Tackett is part of a team that won the Junior College Division 1 National Championship last year and was named NJCAA Player of the Week two weeks ago, leading the team with his .485 average, seven doubles, four triples, four homers, 31 RBI and six stolen bases in 20 games. Hunter was part of the 2012 Team One Futures Texas event and was a 2013 Under Armour Pre-Season All-American.