Congratulations to 2-time #UAALLAMERICA OF @joadell0 on his call-up to the @Angels! He is the 4th player from the 2015 UAAA Game to get the call - joining @BoFlows, @carterkieboom & @Baby_Jesus9 - and the first from the 2016 game to get the MLB promotion. @BaseballFactory pic.twitter.com/ZQ6xKdHRwV

The MLB Alumni Notebook takes a glimpse into notable performances from around the professional ranks throughout the season. Steve Bernhardt, Chief Baseball Officer for Baseball Factory, provides information on the Factory alumni. Here are a few highlights from the spring so far: 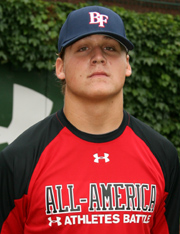 Allie has bounced back-and-forth between pitcher and position player a few times, but seems to be settling into his role on the mound. He has made four spring training appearances totaling four innings so far, and has not allowed a run while striking out four. The former Pittsburgh Pirates 2010 second round selection participated in the 2009 Under Armour All-America Game.

The 2010 Under Armour All-American has started the spring off well. He is hitting .429 with a double, three home runs, and has even added a stolen base. This coming off a 2018 where he made his debut on April 18th and ended up played in 123 games with the Rangers, hitting 16 homers and driving in 58. 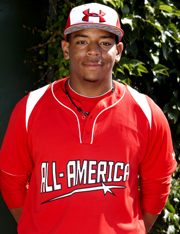 Ke’Bryan has started spring training doing what he’s done everywhere he’s played – producing. He’s has a .417 average with three doubles, two home runs and six runs driven in. Hayes, the Pirates first round pick (32nd overall) in 2015, has shown premier defensive skills and continues to improve each year with the bat. He hit .293 with 31 doubles, seven triples, seven homers and walked 57 times, finishing with an on-base percentage of .375, in 508 plate appearances over 117 games at Double-A Altoona last season. Hayes is the Pirates’ #2 rated prospect on Baseball America’s Top 30 Prospects List and participated in the 2014 Under Armour All-America Game as well as the Under Armour Firecracker Classic and the All-America Pre-Season Tournament the same year.

Patrolling the same outfield with Mike Trout doesn’t make it easy to grab headlines, but Parker is doing just that early in the spring. He has a robust .545/.706/1.979 slash line and has hit two homers. The Fort Belvoir, VA native’s time with the Factory goes back to 2006 when he was a junior in high school and performed in the Team One BWI World Series.

The athletic Smith has come out swinging a hot bat. He’s making a good case to be kept on the major league roster thanks to a 10-for-20 start with a double, home run and six RBI’s. The former first round pick (11th overall) by the Mets in 2013, participated in the 2012 Under Armour All-America Game.