Since seventh grade, Colin Carr has carried Lucky, his well-traveled miniature green turtle with him everywhere. 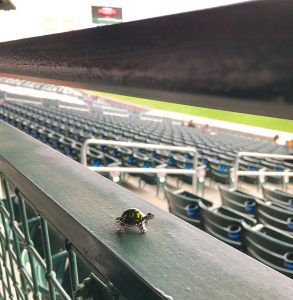 Lucky, the miniature turtle, shown here at Pre-Season, has been with Colin everywhere that he has played baseball.

As a youth player, Colin’s team played in Cooperstown, New York and Lucky was there to watch Colin slug two home runs and throw a no-hitter in one game. From all corners of the country, every little league and travel ball tournament to each Baseball Factory event, watching every pitch and swing of the bat.

“He’s never let me down,” Colin says of the miniature keepsake. “If I’m moving too fast or struggling, I think of Lucky and it helps me slow down and focus.”

Colin mentions one particular game where Lucky had fallen from his perch, atop the dugout fence. When his mom, Kathryn picked Lucky up, the team’s luck changed.

“We were losing one game by the score of 8-1, and my mom looked down and Lucky had fallen off the fence and was on the field upside down. She picked him up and sat him back on the fence. Right after that in our next at-bats, we scored 11 runs and won the game.”

For all of the good fortune Lucky has brought Colin on the field, it’s also signaled strength and resolve as Colin’s dealt with health issues, not only to loved ones, but himself as well.

Beginning in 2012, the Carr’s world was flipped upside down as Colin’s father, Warren, spent three weeks in ICU, diagnosed with MAC disease (Mycobacterium Avium Complex) – a disease that mimics lung cancer and is incurable – and COPD (Chronic Obstructive Pulmonary Disease). Colin hit his first ever grand slam during that time and later at the hospital, the ICU staff allowed him to present the ball to his father.

In the last few years, Warren has been in and out of the hospital, but Colin has kept by his side each time. Last June, as Colin prepared for his time with the Factory in Omaha, NE for the National World Series, Warren developed Necrotizing pneumonia, which Kathryn said moved Warren into end stage COPD. For the first time, Colin and Lucky, traveled alone to the event as Kathryn stayed to take care of Warren.

As Colin entered high school, he encountered several injuries and health scares of his own that set him back.

His freshman year, he suffered a snapped pelvis and in his sophomore year, pneumonia and mono sapped him of his health. Then during his junior year, he had surgery to remove a tumor the day before Thanksgiving. Fighting through that, Colin was dealt one more blow that nearly cost him life as he knows it. He was diagnosed with Guillain-Barré syndrome, a disorder in which the body’s immune system attacks part of the peripheral nervous system.

“Colin had a very serious viral flu which trigged the Guillain-Barré and it’s a very scary thing because it can cause permanent paralysis,” Kathryn said. “The school called and told me they may need to call an ambulance, so Colin was rushed to the hospital and he went from being numb in his hands and fingers, all the way down to his waist, and I thought, “well this is it. It’s over.” But he’s just a fighter because baseball is his life.”

He credits his coach for a quote that he found particularly powerful as he continued to fight.

The Cameron Park, California native first attended an Under Armour Baseball Factory College PREP event in Stockton, CA in February 2016 and showed that day as a good, young prospect, both on the mound and at first base. Colin took nearly all of his junior season getting ready for baseball again, missing three months worth of practice leading up to last June’s tryout in Bakersfield, CA, but he has persevered, improving his numbers at each tournament he participated in. Of course, Lucky was there.

“My numbers increased little by little each time,” Colin said. “I got faster, hit better, threw harder. Then, when I got the letter in the mail for Pre-Season, I was shocked, but it was such a good feeling and felt honored to be part of it.”

Colin has called playing in last month’s Under Armour All-America Pre-Season Tournament, “the thrill of a lifetime.”

“I was honored to be chosen and hoped that I showed the coaches and scouts that they made a good choice,” Colin said.

Both he and his mom were in awe of the entire event, but what he mentioned the most were some of the comments from Opening Ceremony and being able to play in Sloan Park with his peers. Comments from people like Baseball Factory Senior Director of College Recruiting, Dan Mooney as well as Founder and CEO, Steve Sclafani, have gone into what Colin calls his “inspirational file.”

Colin’s Player Development Coordinator, Corson Fidler has seen how the adversity has only made him stronger.

“Colin is such a gritty kid. He has faced a lot of adversity for a guy his age, but that adversity has only made him stronger as a student, player, and person. He battled back in the classroom after missing a lot of school, he was behind in the recruiting process as a junior without video to share with college coaches, and he came back to his full strength and abilities on the field by focusing on Player Development with us.”

His hard work at events in Omaha and in Arizona at the Senior Fall Classic led to his commitment to Sacramento City College, one of the best junior colleges in the nation as far as baseball programs go. The school offers student-athletes their own study hall, tutors to work with and advisors who help set up their class schedules, all of which Kathryn says is the perfect immersion for a student-athlete to thrive and not be considered just an “athletic student.”

Both Colin and Kathryn credit Mooney – who recommended Sacramento City for Colin – with help navigating the sometimes scary and tricky world of college recruiting.

“He’s been amazing to me,” Colin said. “We met in Omaha and he came to the games and talked with me about college and what my plans are and what his expectations were for me.”

Among the things that Mooney mentioned to Colin during his talks with the family was a key piece of information in the decision for where Colin would go to school at the next level.

“I think Dan is outstanding,” Kathryn said. “We’ve had the opportunity to speak with him many times and as we went through the process, Dan mentioned to us that if it weren’t for going to a junior college himself, he wouldn’t be where he is today. He’s an amazing man.”

Mooney remembers Colin’s time in Omaha at the event and how he immediately stood out.

“I remember watching him play in Omaha and there was just something special about him,” Mooney said. “You could tell he just loves to play the game. I enjoyed working with him and his family and wish him the best at the next level.”

Soon, Colin will adjust to the rigors of college life. He’ll begin most mornings with a 5 AM wakeup, going until 4:30 PM, fully immersing himself into the experience. Colin explained his immediately comfort with the coaching staff at Sacramento City.

“They are amazing. I love the coaching staff at Sacramento City. They really care about their players and their players’ health and education.”

Colin plans to study Kinesiology at Sacramento City and then double major in sports medicine and broadcast communications at the four year institute he ultimately chooses. He’s received help from his sister-in-law who is a pediatrician on ideal schools to choose from. It’s just another sign of Colin staying on top of his game plan. 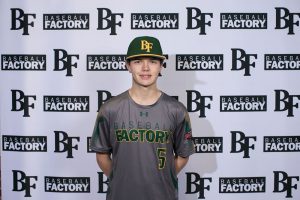 “I told him, “I know you want to be a major leaguer; there’s hundreds of thousands of kids your age who want to,” Kathryn said, adding, “but you need to have a backup plan. Even at age 11, he already had it, he told me he wanted to go into broadcasting or sports medicine, so either way, he’s always around the game.”

Colin, who’s nickname “Baby Rhino” was given to him by his travel ball coach, wishes he would have started earlier with the Baseball Factory so that he could have worked towards grabbing what he calls the “gold ring” – Wrigley Field and the Under Armour All-America Game. Even still, Colin calls the past year “the experience of a lifetime” as Baseball Factory has brought out an even greater joy to the game for him.

“Colin’s done everything we have asked of him, he has gone about the recruiting process the right way, and has made his dream of playing at the college level a reality,” Fidler said. “He had to work hard to earn every success he is enjoying now, and it was not an easy road for him. Simply put, Colin deserves everything he has accomplished and I am excited to continue to follow and support him on and off the field.”

Colin stays focused on baseball while helping to look after his father and grandmother (who has fallen ill with Alzheimers), staying away from the pitfalls and missteps teenagers sometimes find themselves going through. In a time where anything and everything could go wrong with one wrong choice, Kathryn says that hasn’t happened despite the physical and emotional toll he’s encountered.

“I am continually amazed by this young man. Colin has been an absolute gift to us. He’s done things the right way, always been focused and I think that’s been part of the ability to overcome what he has so far. There’s a lot he deals with on a daily basis still, especially with his father’s illness, and its frightening. He puts on his best face every day and I think that’s what keeps him going. He likes to say, “we have today and that’s another day to get better and do the best we can do.”

Mooney echoes the same sentiments for what Colin has been through.

“I’m not sure if ‘obstacles’ or ‘adversity’ can effectively sum up what this young man has gone through,” Mooney said. “Colin has worked hard and achieved some success, all the while remaining a good person.”

Family, his education, close friends and of course baseball, are what make his life and his drive for success important.

“He is such an amazing, caring and loving person, never complaining about what he is missing out on by helping his family; he considers it special time. We know many others suffer much more adversity, but he has also watched others let it destroy them; he’s determined to not be one of those.”

Lucky will continue on Colin’s journey to the next level, but there’s one more motivational phrase he’s placed in his inspirational file, one that keeps his drive going.

“The task ahead of you is never as great as the power behind you.”