Baseball Factory is proud to announce that Jim Darby – a pioneer in the Marketing industry – has joined the organization as a Special Consultant.

Jim brings nearly 40 years of experience to the Factory from his time working with Easton, helping to transform the organization into the powerhouse it is known as now in the sports industry.

Before working at Easton, Darby, who grew up in California, played baseball at the University of Cal-Berkeley and later became a pitching coach at his alma mater for three years. After his stint as a coach, he served as a Promotion Manager for Curley-Bates in December of 1977, just as this company was set to introduce two new lines to the market – Easton Aluminum bats and Mizuno gloves and footwear. Seven years later, the company was bought out by Easton, becoming Easton Sports in 1985.

Over the years, Darby has been influential in the industry, helping to shape and affect change in sports. He helped change the way the game of hockey in the NHL was played, ushering in the first aluminum hockey stick in the NHL in 1986. He also served as the company liaison with all amateur organizations, including Little League, PONY, Babe Ruth, Dixie, AABC, NCAA, NAIA, and the NFSHA. 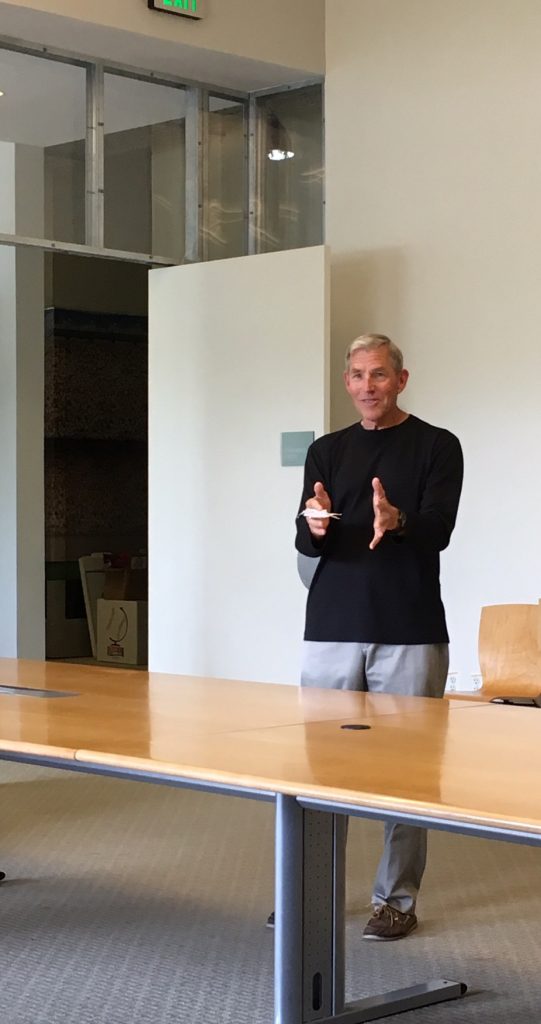 Darby speaks to the staff last week at Factory Headquarters

He’s helped sign endorsement contracts with some of sports’ biggest names, with over 40 Hall of Fame players from MLB, NHL and the NFL, including Rickey Henderson, Gary Carter, Ozzie Smith, Goose Gossage, Robin Yount, Tim Raines, and Jeff Bagwell, and in the other sports such as, Joe Montana, John Elway, Wayne Gretzky and Steve Yzerman.

Darby has worked very closely with Baseball Factory in recent years and stopped by Factory Headquarters last week to meet the staff and spent a few minutes talking to Matt Lund about how he looks to help the Factory in the future.

Matt Lund: First off, welcome to the Factory, Jim. You’re on with us a special consultant, working with us in a variety of ways. Tell us about why you’re joining the Factory?

Jim Darby: Well, mainly because I believe in the business. I think what you folks do here is so valuable to families, kids, to the coaching community, and not because you’re necessarily developing just a baseball player. What you’re developing is a person. And you’re helping that person navigate the next step of their life, and I think that is really cool.

ML: Based off your incredible experience working with so many professional athletes and entities during your time with Easton, what do you hope to bring to the Factory?

ML: In your 39 years with Easton, how did you help transform that organization, from the time you started to the time you retired?

JD: I was very fortunate, because when I started, Easton was brand new, figuratively, in the baseball and softball world. It was a perfect storm for me in the sense that I could take some thing brand new and work with it and as time evolved, we got into other sports like hockey. I remember the first time I went into a meeting and was told we were going to sell aluminum ice hockey sticks. I didn’t even know what a hockey stick was because I grew up in California. At first, everyone was using wood sticks in the NHL, and within 5 years, probably half the league was using aluminum sticks and within 10 years, there wasn’t a guy using a wood stick at all, so we were able to transform the industry in that way.

ML: What have you seen in the past working with the Factory that has been positive in your mind?

JD: I think back to when I was a senior in high school, and this was back when Lincoln was president… I had no clue how to get noticed… I just thought college coaches, if I were good, would come to me and I wouldn’t have to do anything. I wouldn’t even know what to do if they came to me, or I’d go to the local JC (junior college), there was just no options or knowledge of what to do. And now, with what you all do, is so cool… a kid and his parents can be navigated through this process, and ideally, in a place that is suited for them.

Let’s face it, when kids today pick a college, for one reason or another, are they really educated on what that college is all about, compared to when I was younger? And I think the Baseball Factory helps to add to that knowledge for the player and the family.

ML: To that point, what stands out the most here at the Factory as opposed to other companies you’ve seen or done business with?

JD: Two things. The passion of the people who work here and the pride of which they take their work. And of course their knowledge. I sat in a room this morning here, listening to the people talking about their various roles, and I was really taken by the fact that, hey, “these people know their game, there’s no fluff here.” Someone like Dan Mooney (Executive Director of College Recruiting).. I can throw a name out (i.e. a college coach) and he’ll know that person and same with Lea Ann Jarvis (Softball Factory’ Senior Director) and everyone else in the room. The nature of the people and the passion for the business really struck me.

ML: Working as a liaison over the years with amateur organizations including Little League, PONY, Babe Ruth, Dixie, AABC, NCAA, NAIA and the NFSHA, how do you take those opportunities that you had with those organizations to help the Factory in a similar role?