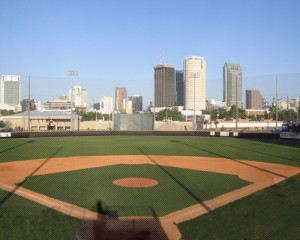 With the University of Tampa Spartans on the road at Florida Tech, the UT Baseball Field was available for the Under Armour Baseball Factory National Tryout on Sunday, April 19.

Per TampaSpartans.com, “The UT Baseball Field has been the site of numerous NCAA Division II South Regionals and also serves as the host of the annual Tony Saladino Baseball Tournament for area high schools.” We are fortunate to visit this beautiful ballpark twice a year, usually in April and then again in November.

Three super-talented 2016 graduates posted impressive measurables in different categories — with three of the numbers coming in as good as we’ve seen all year. 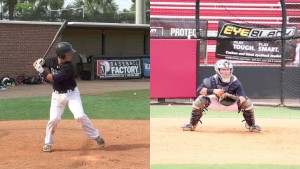 The last time I compiled top pop times was November 19, 2014. As of then, the lowest pop time we’d seen from a 2016 graduate was a 1.84 turned in by Zach Frey of Bloomington, IL. Among 2015 graduates, we saw a 1.69 from Justin Wilson (Austin Peay commit) of Murfreesboro, TN and 1.75 from 2014 Under Armour All-American Wyatt Cross (Univ. of North Carolina commit) of Broomfield, CO.

Since then, we saw a 1.76 from 2016 C Jackson Greer (Central HS – Knoxville, TN) at the January 2015 Under Armour All-America Pre-Season Tournament. As it stands today, that is the only pop time among 2016 graduates ahead of the 1.78 turned in by Amditis.

Michael Amditis is a whole lot more than just a catch-and-throw guy however. He touched 90 mph at the raw velocity station, and during his defensive workout he showed standout ability to block balls in the dirt. He reached 90 mph again later in the workout, this time at the bat exit velocity station. His hands were quick to the zone, and he applied strength through contact for hard contact to all fields. 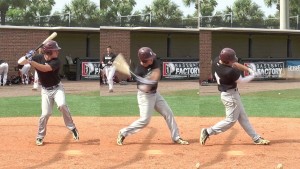 2016 Nick Derr (IMG Academy – Lakewood Ranch, FL – Florida State Univ. commit) ran 6.44 in the 60 yard dash, reached 95 mph at the bat exit velocity station, and notched 92 mph raw velocity. He featured a loose right-handed stroke with quick hands to the zone and the ability to make consistent hard BP contact. He is kind of caught in between positions defensively, with enough athleticism for shortstop but without the ideal actions and fluidity for the position. He didn’t workout for us in the outfield, but he is likely a more attractive prospect there than he is in the infield.

I haven’t yet compiled bat exit velocities (we just started measuring that officially at our events in early 2015), but from memory I don’t think I’ve come across 95 mph just yet. I’ve seen 94 mph and several others in the low 90’s — look for a post upcoming in the near future with a current leaderboard for this, along with updated leaderboards on other measurables. 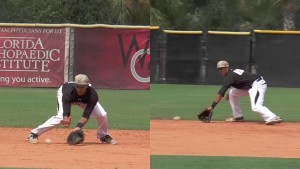 2016 SS Colton Welker (Stoneman Douglas HS – Coral Springs, FL – Univ. of Miami commit) showed defensive ability on par with Michael Amditis’ catch & throw skills and Nick Derr’s speed. His actions were easy and fluid, and he showed the ability to finish a variety of plays with strong throws across the infield. Like Nick Derr, he touched 92 mph raw velocity — ranking him very near the top of all 2016 graduates we’ve seen in that category.

He came in just under seven seconds in the 60 yard dash at 6.99, and reached 88 mph bat exit velocity. His glove is easily ahead of his bat, he has rhythm to hit and makes a coordinated move through the zone — more than enough to merit a close follow to see how his bat develops. 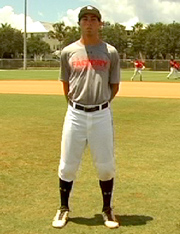 We’ve seen him seven times since November 2012, and he’s never run worse than 6.88 — which he posted the very first time we saw him, as a rising sophomore. At that same event, he notched 84 mph raw velocity. Since then, his 60 yard dash has steadily improved all the way down to 6.69, while his raw velocity has steadily increased all the way up to 91 mph.

At the same time, the all important hit and field tools have been getting better. He showed promise early, and then it seemed like the bat and glove may have plateaued, until he most recently showed nearer to a legitimate center field type defender with a better than functional left-handed stroke. By functional I mean a stroke that will allow him to put his speed in play between the lines — and he’s better than that given some gap power. 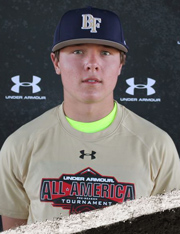 2017 SS/2B Zach West (Dunnellon HS – Dunnellon, FL) ran nearly two tenths of a second better than we saw most recently. He posted 7.01 in the 60 yard dash, down from the 7.18 he ran at the 2015 Under Armour Pre-Season All-American Tournament in Mesa, Arizona. At that event, he showed a solid left-handed stroke along with a good glove in the middle infield. A few months later in Tampa, he showed rhythm to hit along with hand-eye coordination and the ability to make consistent contact. He reached 84 mph raw velocity, and showed good body control to make plays defensively.

The best fastball of the day came from 2017 RHP Khalil Almutasim (Freedom HS – Tampa, FL) at 86 mph. He stands a solid and strong 6-foot and 221 pounds, and reached 88 mph bat exit velocity — offering enough proof of raw power to give him some two-way potential, even though he didn’t workout defensively for us. 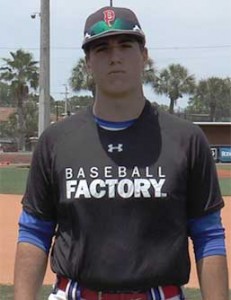 2017 RHP McCabe Sargent (Land O’Lakes HS – Land O’Lakes, FL) touched 85 mph, while 6-foot-3 and 225 pound 2016 OF/RHP Tanner Fults (Home School – Lakewood Ranch, FL) touched 84 mph. Fults appears to have more value as a position player however. On the mound, he doesn’t have much in terms of secondary stuff, while as a position player he has a chance for raw power (88 mph bat exit velocity) and could fit a corner outfield profile.