Only recently back to 100% a month or so prior to the 2015 Under Armour All-America Game, Bo Bichette made up for lost time in Chicago. He was one of four automatic qualifiers for the Home Run derby following the Thursday evening preliminary round at UIC, and went on to win the derby on Saturday at Wrigley with an impressive final round total of 10 home runs.

As if that wasn’t enough, he was named the Baseball Factory Player of the Game following his National team’s 11-5 victory — a win that saw Bichette triple, score a run, drive in a run, and make several solid defensive plays at second base (after starting the game on the hot corner). While his raw power was eye-catching as usual workout settings, his defensive ability again played significantly up from what he showed in those same workouts — offering further proof (we saw the same thing in January) that he can put his tools into play when it really counts. 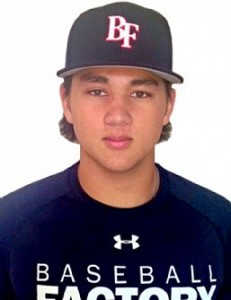 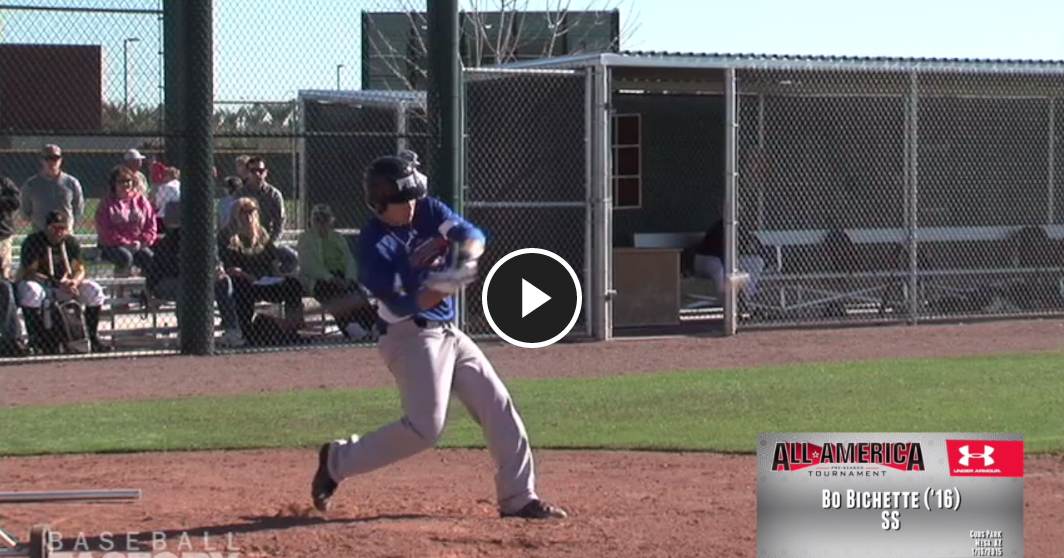 PREVIOUS SCOUTING REPORTS:
Bichette earned Top 10 honors among 2016 graduates at the 2015 Under Armour Pre-Season All-America Tournament. His scouting report from that event recap appears below:

Though he has a somewhat of an unorthodox approach to hit, Bo Bichette has special bat speed and standout raw power — not unlike his dad and older brother. In Mesa, he showed the best raw power of any hitter in batting practice, and showed a knack for hard contact in game at bats.

He stands a solid 5-foot-11 and 200 pounds, and posted respectable run times in the 60 yard dash and down the line. Speed isn’t a strength of his, and frankly it doesn’t need to be — the value here is a potential middle of the order bat. He got the bat through the zone with true “blur” bat speed, and the resulting contact with a wood bat was loud enough to turn heads on adjacent fields at the Cubs Park quad.

Defensively, he plays the game better than he works out — as evidenced by a pair of excellent plays to his backhand side in his morning game on Sunday. Athletic and instinctual plays like these support his ability to remain in the middle infield, which would certainly max out his value based on his offensive prowess. Time will tell, as he will need to prove his ability to handle the routine plays required up the middle beyond his ability to make the special plays.

His dad Dante Bichette played 15 seasons in the Major Leagues after being selected in the 17th round by the California Angels out of Palm Beach State College. He hit 274 career home runs, and drove in 100+ runs in five consecutive seasons from 1995-1999 with the Colorado Rockies. He made his Major League debut with the California Angels, and also saw ML service time with the Brewers, Reds and Red Sox.

His older brother Dante Bichette Jr. — a participant in the 2010 Under Armour All-America Game—  was picked 51st overall by the New York Yankees in the 2011 draft. After starting the year in the Advanced A Florida State League, where he hit 27 doubles and 9 home runs on the way to 64 RBI in 109 games, he was promoted to AA Trenton (in the Eastern League) at the end of the 2014 season.

Based on his performance in Mesa, Bo was selected to the 2015 Under Armour All-America Game, scheduled for August 15 at Wrigley Field in Chicago.