LHP Brendan Murphy (Mundelein, IL) recorded 93 mph exit velocity at the Monticello, IA Under Armour Baseball Factory National Tryout to qualify among the leaders in the class of 2017. An Arizona State commit, Murphy stands at 6-foot-4, 200 pounds and featured an impressive curveball and change to go with an upper 80s fastball.

The next highest reading off the bat in Monticello came from fellow 2017 LHP Jared Thompson (Vinton, IA) at 88 mph, with 2017 RHP Evan Reifert (Wilton, IA) just two ticks back at 86 mph. Pitchers are allowed to take batting practice at our workouts — as each of the previously mentioned clearly did — even if they don’t register to workout at their secondary position in the field. 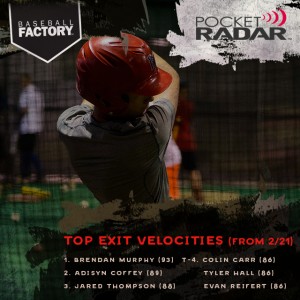 Ahead of Thompson and Reifert was SS/RHP Adisyn Coffey (Albany, IN) at 89 mph. The first primary position player of this group, Coffey attended the Xenia, OH UA tryout, where he also qualified among 2017 leaders with 89 mph raw velocity. In fact, since we last saw him he posted a five mph gain on that measure and trimmed four tenths of a second off his 60 yard dash.

A pair of 2017 two-way players — one each R/R and L/L — turned in the highest exit velocities at the Under Armour Baseball Factory National Tryout in Stockton, CA. RHP/3B Tyler Hall (Oakdale, CA) was the best runner at the event with a 7.06 60 yard dash, and saw the ball leave his bat at 86 mph. 1B/LHP Colin Carr (Cameron Park, CA) boasted a well-rounded set of tools as a position player, highlighted by an 86 mph exit velocity of his own.

CLICK HERE for the Top Exit Velocities from Baseball Factory and Team One events through February 21, 2016.