In Their Own Words: A Conversation with Georgia Tech Commit Taylor Trammell 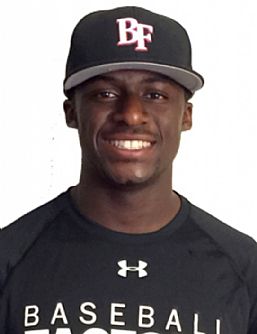 Taylor Trammell is an incredibly talented two-way player from Powder Springs, GA who has committed to Georgia Tech and will play baseball for the Yellow Jackets in 2017, but has the all-around skill set to make some noise in next month’s Draft. Besides Taylor’s off-the-charts skill set, it’s his positive demeanor and humble outlook on life and the game of baseball that will take him very far in the years to come.

Trammell was the Offensive Player of the Year in Football at Mt. Paran Christian in Powder Springs, GA where he led the state of Georgia in touchdowns and rushing (38 total TD’s, 3 interceptions and 2,500 yards rushing).

How good was he? He broke the county rushing record and was just 650 yards behind University of Georgia great, Herschel Walker’s state record.

He’s been dynamite on the baseball diamond, igniting the lineup from the leadoff spot this season, hitting .515, with seven doubles, four triples, nine homers, 35 RBI, 28 walks and going 29-for-29 in stolen bases.

Baseball Factory: What will you miss most about playing high school sports?

Taylor Trammell: I will miss the team and my teammates, we’ve gone through four years together and it made me the man I am today. My teammates encouraged me to keep going hard in whatever I do in life… I’ve always looked up to the seniors… they gave me advice and told me I would do big things and I believed them. It was humbling, it taught me to always remember where you came from. With all the stuff going on now, its easy to get away from thanking the people who have always been there for you. So, I’ve always made sure to thank the people who have believed in me.

BF: What are your plans at Georgia Tech – are you going to stick to baseball?

TT: The coaches wanted me to play, but with everything going on in baseball, I wanted to focus on just baseball. I love football; it will always be part of me, played since the age of five. But there’s just something more special when you play a game of pick-up baseball. There’s nothing like it.

BF: By all reports, you’re rising up the list for this year’s Draft – Have you been working out getting ready for the Draft with workouts at your high school or private workouts? Has your phone been blowing up or have teams been contacting you constantly?

TT: I’m getting excited about it. I’ve had a few workouts with some teams, teams have been in contact, telling me that they like my skill set. I know later in May, things will be hectic. But I’m ready for it. I’ve worked all my life to get to this point and there’s no stopping now.

BF: What are your plans between now and the draft?

TT: Working on my arm and getting stronger every day with my trainer Mike Butler at Champs Fit Performance in Powder Springs, GA. He’s definitely one of my mentors. I am also hitting and running every day. God willing, if I end up being a draft pick and things fall into place, I’m gonna hit the ground running… I’m going to go out and compete every day.

BF: Any plans for the night of the Draft?

TT: A lot of people have tried to have Draft parties… you never know, I don’t want to get my hopes up… I may just be sitting in my bed, watching the Draft and seeing everything unfold. Or sitting on the couch with my family watching it. I’m a pretty laid-back person, so I don’t want to draw too much attention to it.

BF: How do you think football has helped you on the baseball field?

TT: It helped me out tremendously… with my instincts, tracking balls down in the outfield… aggressiveness on base paths… For me personally, it’s helped me out with hitting also. Before this year, I developed a ‘No Regret’ attitude… I feel like its helped out with my toughness, aggressiveness, instincts, my reaction time has improved because I played running back and you have to make cuts instantly, so reading balls off the bat in the outfield has helped because of it.

BF: Do you have any favorite baseball players in the game right now?

TT: I enjoy watching Curtis Granderson, I like his swing… I love his swing, he gets set early and just hacks. Most people don’t know, but from the leadoff spot, I think he had 40 home runs one year… that’s big. For me being a leadoff guy, that’s huge… He’s a great person on and off the field too. Also, I like watching Dexter Fowler, he’s a Georgia guy and also a centerfielder. I like the way he hits the ball for the Cubs.

BF: Any player you model your game after currently?

TT: Again, it would probably be Granderson, he just plays hard, swings the bat well, takes advantage of the situations on the base paths. He does the little things, hustling on and off the field.

BF: You were the Gatorade Player of the Game (G Award) last year at the All-America Game… tell me about your experience with the Baseball Factory while in Chicago, playing at Wrigley Field.

TT: I really think a lot of the success I had this year, was from receiving that award. When I won the award, I spoke with Mr. Dave Lax and he told me the guy who won the award the year before was a first round draft pick. That motivated me by winning the award to continue to get better. The award is in my room now. I just want to live up to the expectations of everyone for the players who win that award.

BF: What are your overall All-America Game memories?

TT: Every time someone asks me about my greatest high school experience, I always include that in there. Chicago and the All-America Game are once-in-a-lifetime opportunities. I’d say the three most memorable things are getting to play with some great players throughout my high school career; Will Schnure (sophomore catcher at Middle Tennessee State), Jake Palaomki (sophomore INF at Boston College) and my brother, Kyle Trammell. They all encouraged me a lot to keep pushing forward. Second was winning the State Championship in football two years ago and the All-America Game. I look back and I think about the great players who played and I wish we could all go back and experience that again. It’s something that will live on with me forever.

BF: You were great working in the community with at-risk youth during All-America Week in Chicago – tell me about that experience and how you want to be able to lead by example for the youth players?

TT: I didn’t come from a lot.. my family and I aren’t the richest people. They have sacrificed so much for us and for me to get where I’m at today, so every time I have the chance to give back, I will. If I can have that same impact on someone else… maybe just by saying hey “how are you doing today” or “you’re a great person” then I’ll do it, because that one moment, day, week, could be a life changing moment for someone else.

I’m a Christian and want to spread the word of God and give back. It’s something I live by… giving back to others is what I live for. If I can put a smile on peoples faces, then that makes me the happiest. Being a top rated player and outfielder in the country, doesn’t come by your game alone, it comes from your attitude and how you carry yourself on and off the field and I take that very seriously. I live by the statement – “I am third”. I put the Lord and Savior before me and others before me as well… Others may not agree, but I stand by that.