In past years, this event has seen the likes of Nick Gordon, Touki Toussaint, Brendan Rodgers among others. Once again, the talent at this elite event was outstanding and on this night, the pitching stole the show.

After a position player workout, the game kicked off with RHP Tyler Owens (Ocala, FL) on the mound showing a quick arm and an impressive three-pitch mix. The Florida State commit threw a high volume of strikes while touching 94 mph with his fastball. Complementing that fastball was an outstanding change and a sharp breaking ball. Starting for the other squad was RHP Joseph Charles (Celebration, FL), another 2019 RHP. Charles also flashed power stuff with a live fastball up to 93 and a hard 2-plane breaking ball to induce some swing-and-miss. At 6’3”, the UNC commit has a projectable frame with the likelihood of more velocity in the tank.

The game’s next two arms each struck out five of the eight hitters they faced. 2020 righty, Victor Mederos (Miami, FL) appeared in total control on the mound, working an effortless 92-94 mph with a clean delivery and arm stroke. Add in a power curve and feel for a change, and this is one of the top sophomore arms in the country. Opposing Mederos was 2019 LHP Ryan Cabarcas (Pembroke Pines, FL). Most of his five strikeouts came via his breaking ball that showed good rotation and had excellent depth. Out of the hand it looked just like his mid to upper 80s fastball, but dove late after most hitters had committed. It’s easy to see this University of Florida commit carving up high school lineups.

Speaking of carving up lineups, LHP Alex Munroe was next to take the mound and he was dominant, striking out 7-of-the-8 hitters he faced. Munroe sat in the upper 80s, touching 91 mph with his fastball, and he was aggressive with it. On multiple occasions, he challenged hitters with it and threw it right by them. It appeared that, in addition to his good stuff, he had some deception in his delivery. A Miami commit, his curve and change were also quality offerings. 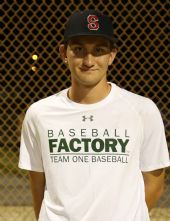 A couple 2019 RHPs followed, both with deliveries that made for uncomfortable at bats, especially for right-handed hitters.

Jack Jasiak used a tailing/sinking fastball in 86-88mph range from a ¾ arm slot to get outs. He pounded the strike zone and did not allow a baserunner in the eight hitters he faced. Big RHP Casey Daiss was challenging in a different way. His fastball came from an overhand slot, and when combined with his 6’4” height, gave the pitch serious downhill plane.

Another high ceiling RHP who threw was University of Miami commit Jake Garland. Garland is just ramping back up for the fall, as he threw one inning, and touched 91 mph despite not really airing it out. It will be interesting to follow him, as his downer breaking ball showed flashes of an out-pitch and he has some feel for a change. 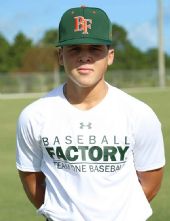 Two-way player Andrew Roberts (University of Florida commit) rounded out the righties throwing three pitches for strikes and touching 87 mph after a workout and playing much of the game in the infield.

The white team at the event finished with an impressive trio of left-handers. 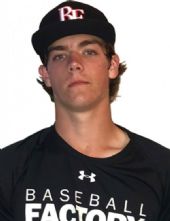 2020 Nelson Berkwich showed why he was an integral part of the USA 15U National Team’s pitching staff and is already committed to Vanderbilt. He worked quickly, pounded the strike zone with all his pitches and showed advanced command of his stuff. Touching 89 and landing a quality breaking ball, this young arm is one to watch closely.

Two-way player Derek Crum jumped on the mound and also ran his fastball up to 89 mph. He struck out the last four hitters he faced and showed athleticism and confidence on the mound.

In a game filled with high level pitching, perhaps the best raw stuff was displayed by LHP/1B Hunter Barco.  After showing legitimate power with the bat in BP, Hunter showed a power arm with a fastball up to 94 mph, a sharp mid-80s breaking ball and low 80s change. His fastball has outstanding life, and his delivery is athletic and sound. In addition, his arm is loose and he showed the ability to throw all three pitches for strikes. Hunter, committed to the University of Virginia, has an extremely bright future.

Overall, this outstanding group of pitchers really did shine. Of course, there was a talented group of position players on hand as well, and we’ll look at some of them later in the week.