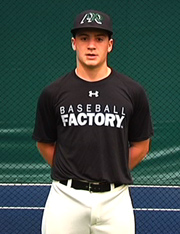 Joe Professori, a catcher/DH from Wexford, PA had quite the start in his freshman season at La Roche College, helping to lead his team in doing something never done before in school history.

Due in part to the play of Professori as well as veteran leadership at other positions, the La Roche College Redhawks record-setting season took them all the way to Appleton, Wisconsin, clinching a berth in the 2016 Division III World Series as they went 42-12 overall, including 22-4 at home.

Professori made an impact from the jump, starting 43 games during his freshman season, hitting .320 with eight doubles, three home runs, 32 RBI and 30 runs scored. He was a perfect 5-for-5 in stolen bases and walked 18 times.

He took his game to an even higher level when the pressure was on, hitting .326 with eight RBI with runners in scoring position and less than two outs. With two outs, he hit .309 with 10 RBI.

Riding a four-game winning streak in post-season play, the Redhawks, out of the Allegheny Mountain Collegiate Conference, entered the World Series at Fox Cities Stadium on May 30th in a make-or-break situation, needing a victory in the elimination game against St. John Fisher to live another day. They did just that, defeating St. John, 9-6 in the National Semifinal.

The dream ended later that afternoon as the Redhawks lost to Keystone College in a heart-breaking, 5-4 loss in 10 innings to end their incredible season. Despite the loss, the experience of the season will carry Professori far beyond his freshman campaign; he’ll use it as his drive to continue getting better.

“It was a great experience to help my team make it to the World Series as a freshman,” said Professori. “Even though we didn’t win the championship, we all believe we will be back and better than we were this year. I don’t believe that I could have made the impact I did if it wasn’t for my teammates. We all strive to be better than we were yesterday and help push each other to be our best. I am truly excited to be surrounded by these guys for another three years.”

Professori, who graduated in 2015 from Pine Richland High School in Gibsonia, PA, first attended an Under Armour Baseball Factory National Tryout in McKees Rocks, PA back in September 2010 and two months later, was in Bradenton, Florida for the Pirate City Select Training event.

“He wasn’t the biggest guy when we first saw him back in 2010, maybe 5’2’’ 100 pounds,” said Rob Onolfi, Joe’s Player Development Coordinator. “But you could tell he was a special ball player and was going to do very well at the next level. He was just a ball player, plain and simple.”

In 2011, Joe attended an Accelerated Catchers Training weekend in Maryland to further his technique and help take his game to the next level. It was these type of events that Joe attended, in addition to multiple National Tryouts and a College PREP event to receive footage, that have helped aid in Joe’s development, according to his mom, Debbie Professori.

“I think Baseball Factory helped him gain confidence because at a young age they gave him true unbiased evaluations, the opportunity to train and compete with competition from all over, stay with teammates, travel with teammates, and have a college type experience,” said Debbie. “He did catchers training in Maryland that was great at helping him with his blocking skills. The evaluations were really helpful after every event. The Pirate City experience we thought couldn’t be beat, but the Sophomore Arizona Classic was even better.”

In that particular Arizona Freshman/Sophomore Fall Classic, Professori went 4-for-10 and was a true gamer according to coaches during the event. Professori, who mentioned the event as one of his favorites, played alongside three-time Under Armour Pre-Season All-American, Matt Tarabek, who will play at Fordham University as well as Jake Jessell who has committed to play at the University of Pittsburgh. Baseball Factory coaches knew they had a baseball player and leader on their hands.

“The information I learned attending Baseball Factory events helped me develop into a better player and person by giving me the opportunity to play with players from all over, getting to know them in a short period of time, and work together towards a common goal,” said Professori. “I think that helped me my first year at La Roche to adapt to a new situation and become a part of a great team.”

“I think Baseball Factory helped Joe feel comfortable in new situations, meeting new teammates and coaches, and helped him to feel confident playing with or against anyone. Every experience with Baseball Factory was better than the last,” said Debbie.

Professori credits the Factory with teaching him certain intangibles of the game and in life that will help him in the future.

“In my opinion, these events helped me not only become a better player through tips and drills from the coaches, but I also believe I learned how to become a better teammate. The evaluations after each event gave me great feedback and I knew what I had to work on to be better. Baseball Factory taught me how important it is to work hard, be humble, and respect the game. Listening to the speeches, especially Coach (Rick) Sofield, helped me to understand the recruiting process and how to choose a program and a school that would work for me. They talked about how grades are important, that stuck with me and I worked hard to successfully keep my grades up during High School and this past year.” 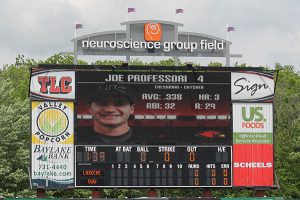 Working hard to make sure his grades were where they wanted to be, Joe has used his experience and maturity on the field as a springboard in helping La Roche get to the level they were this season. During the World Series, Debbie snapped a photo of Joe (left) on the scoreboard. It was a dream come true, she mentions, to see her son play in the biggest game of his life and know that he is working to achieve his goals by working hard.

“To see his face on that scoreboard was surreal. It was so hard to believe we were there, just a few weeks before I had never heard of Appleton, Wisconsin. Joe has always worked hard and pushed himself towards his goals, so to see him on that scoreboard just drove home the fact that one of his dreams had come true and that’s a feeling that’s hard to describe. We are so happy he found a program at La Roche where he can get the degree he wants, has teammates and coaches who work as hard as he does, and constantly push him to be better. It’s really a special talented group, and we are so proud he is a part of it.”