Factory Spotlight on uncommitted 2022 RHP/OF Jayson Nace. At our Opening Day Classic West he recorded the event's highest exit velocity of 95 mph while going 3-6 with a triple in game play. He was also mid 80s on the mound with feel for a change. One to watch from Yucaipa HS! pic.twitter.com/Vzc6KFwNww

On Sunday, February 15 the Under Armour Baseball Factory National Tryout tour stopped in Hardeeville, SC. The Richard Gray Baseball/Softball Complex serves as the home of the University of South Carolina Beaufort baseball program, a member of the NAIA and The Sun Conference. Head Coach Bryan Lewallyn and Assistant Coach Pat Cottrell are both instructors for Baseball Factory during the summer and winter months, when the Sand Sharks are out of season.

After taking two of three from Warner University on Friday and Saturday, the Sand Sharks were off Sunday — leaving the ballpark, and both coaches, available to host the Under Armour Baseball Factory National Tryout & Premium Video Program.

A pair of 2016 right-handers, and high school teammates, led the fastball velocity category. Cem Caglayan and Tyler Fox both attend Hilton Head Prep, both stand at 6-foot-1, and both topped at 84 mph. When we saw Fox last February at this same ballpark, he topped at 83 mph and showed feel for two solid secondary offerings. He was very much the same again this time out, only with a slightly improved top end fastball.

Fox ran away with the grip strength category (see chart above), and was among the best in the barrel exit velocity category. He posted 86 mph, but was bested by Hilton Head Prep teammate Ricky Ledee Jr. at 87 mph off the bat. Ledee is a 2016 OF, and the son of Ricky Ledee — whose 10 year Major League career included service time with the Yankees, Indians, Rangers, Phillies, Giants, Dodgers and Mets. The younger Ledee led the broad jump category at this event, posting a mark of 9’6″. 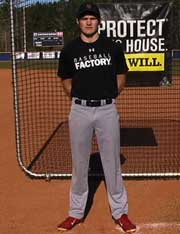 2016 Ryan Woiwode (Benedictine HS – Savannah, GA) was the best runner of the day, and posted the top exit velocity. A switch-hitting third baseman standing at 6-foot-2 and 200 pounds, Woiwode posted 7.20 in the 60 yard dash. His barrel exit velocity was 91 mph from the right side of the plate, and 84 mph from the left side.

The only other player to reach at least 85 mph barrel exit velocity was 2016 C Tim Ortega (Bluffton HS – Bluffton, SC). He was also the leader in the pop time category, with a low time of 2.06, and showed among the best raw power at the event (along with Steven Bell, Tyler Fox, Reese Irwin and Ryan Woiwode).

2017 C Luis Campusano (Cross Creek HS – Augusta, GA) posted a low pop time of 2.09. The 6-foot-1 and 196 pounder showed a well-rounded set of tools, highlighted by what appeared to be the makings of advanced defensive ability.

As was mentioned above, 2017 Reese Irwin (Hilton Head Prep – Bluffton, SC) was among the raw power leaders at this event. The 6-foot-3 and 235 pound RHP appears to have enough bat to be a two-way player, but he only pitched and hit for us (he didn’t workout in the field). Irwin was among three pitchers to top 80 mph (fellow Hilton Head Prep right-handers Cem Caglayan and Tyler Fox were the other two), and he showed feel for his upper 60s breaking ball and low to mid 70s changeup.