On Sunday, January 25 the Under Armour Baseball Factory National Tryout tour made a stop at Smith-Wills Stadium in Jackson, MS.

Brooks went on to prove himself as one of the top all-around players at the workout. His hands were quick to hit while his move was coordinated, and he showed comfortable defensive actions along with the ability to carry his throws across the infield.

2016 C Logan Walters (East Central HS – Moss Point, MS) also had a very good all-around workout. He posted 1.97 three times, and has potential to get his pop times down into the 1.8’s with some work to clean up his release. Standing a broad and strong 6-foot-1 and 215 pounds, he applies his strength through contact to generate explosive contact at times. His exit velocity of 89 mph tied for the top mark of the day.

Not to be outdone, 2016 C Austin Powell (Star City, AR HS) posted 1.94 four times during his defensive workout. His receiving and blocking skills also showed very well, highlighted by his ability to move with athleticism from a crouch. He used his body effectively to generate bat speed – starting with a move to coil up at launch, and then finishing with a move to unwind and extend through contact – allowing for hard contact from gap to gap. 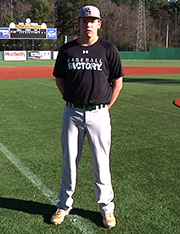 2016 RHP/3B Cole Trichel (Ouachita Christian HS – Monroe, LA) posted an exit velocity of 89 mph, tying him for first place with Logan Walters. He ran his fastball up to 85 mph, tops for the day all by himself. He added an upper 60s breaking ball and a mid 70s change, both of which were thrown with fastball arm speed and with flashes of sharpness. Standing a broad shouldered 6-foot-3 and 205 pounds, he has room to fill out – making an upward velocity bump a real possibility.

Already an imposing presence at 6-foot-6 and 224 pounds, 2016 RHP Paxton Mills (Wynne, AR HS) drove his 78-83 mph fastball on a notable downhill angle. Currently a low 60s offering, his breaking ball stands to gain snap and depth as learns to maintain his arm speed along with the pace of his delivery. He’s got some feel for his change, giving him a chance for a solid three pitch mix.

Projectable 2016 RHP Patrick Hodges (Terry, MS HS) topped at 84 mph and spun a solid breaking ball around 70 mph. He maintained control of his 6-foot-2 175 pound frame through his delivery, allowing for a lot of strikes throughout his arsenal of pitches. Like Mills, he got on top of the ball and generated good downward angle.

A pair of 2017 graduates combined long, lean and projectable frames with impressive measurables.