Kyle Schwarber hit an amazing .412 in the World Series just six months after major knee surgery. By all accounts, Schwarber is a “baseball rat” – a guy who just can’t get enough of the game. 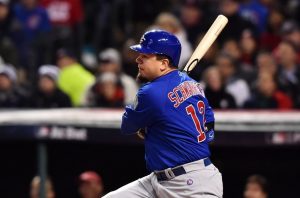 Even after the surgery, he spent as much time as he could with and around the Cubs team. Teammates and Cubs personnel talk not just of the number of hours he spent daily on his rehab work and in the weight room, but the intensity with which he attacked those workouts. They also spoke of how much video he studied while he was out-of-action, along with the scouting reports he read, the meetings he sat in on and the games he watched from the dugout.

Kyle Schwarber is a player who continued his development even when he couldn’t get on the field. That development didn’t stop when he got clearance to swing a bat.

Facing a very small window to prove that he was worthy of a World Series roster spot, Schwarber only played two games in the Arizona Fall League (getting eight plate appearances). During his brief time in Arizona though, he did drill work in the cage, took batting practice, took simulated at-bats off a young Cubs pitching prospect and tracked a reported 1,300 pitches off a machine to help him recognize breaking balls again. He worked in different practice settings to be able to perform at his best in games.

Schwarber was injured in the third game of the season this year and did not return until the World Series, where he recorded his first hit of the season of Game 1. In preparation for his moment on the biggest stage in baseball, he spent countless hours in development (mental and physical) with a minimal amount of game play.

Development. It’s an important aspect in all areas of life. As a high school or youth player – what is your development-to-game ratio?

Are you spending hours upon hours getting better through team practices, individual skill work, weight room workouts and speed/agility training? When someone asks you how you are getting better, does your answer involve the number of games you are playing or the development work you are doing?

Now is a good time to look at how much time you spent this past year playing games vs. working to improve as a player. To maximize your potential, you need to spend more time on development than games at this point in your career – when you do this, you’ll be amazed at the results.

Improve your development-to-game ratio to the level of Kyle Schwarber and so many other Major Leaguers, and build your way to greatness!