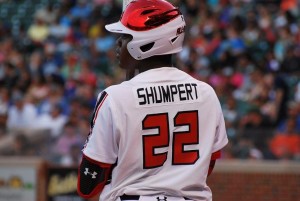 The Under Armour Baseball Factory All-American Game was on the MLB Network, live across the nation for all to see. At that moment, Nick dreamed of someday soon in the future being part of the extravaganza.

“I thought, ‘wow, I want to play in that some day’”, Nick remembers. “Then, when I got the chance, I couldn’t wait, I really looked forward to it all summer.”

Nick’s chance to live out that dream happened last August and he hasn’t looked back.

The younger Shumpert is the son of former major leaguer, Terry Shumpert, who played 14 seasons in the big leagues with the Royals, Red Sox, Cubs, Padres, Rockies and finally with the Rays.

In 1996, Terry’s seventh season in the majors, the Chicago Cubs were his team and Wrigley Field was home. It didn’t dawn on the Shumpert family until after last year’s showcase of top young talent that Nick had now played in the same ballpark his father once did.

The moment wasn’t lost on Nick; both he and his family realized that it “was a really cool experience”, recognizing the irony of the situation as the son to a former major leaguer. 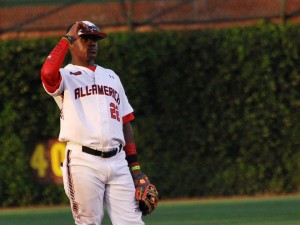 “My mom told us after the game, that my Dad played here too. Just being out at Wrigley with so much history and out there with my buddies playing a game I enjoy, it was a great experience to go through.”

After all, before that day, how could he remember? The same season Terry played in the Windy City, his wife, DeQuita was four months pregnant with Nick.

“My wife was actually still pregnant (with Nick) during that summer. So to have it come full circle with Nick playing on the same field, under the lights at Wrigley Field was very cool and very exciting.”

The happiness and joy that the Shumpert family felt last August isn’t over. It’s expected that Nick will be a high draft selection when teams come calling at this year’s MLB Draft.

Shumpert, a senior at Highlands Ranch High School in Colorado, led his team to a 12-8 record this season and a trip to the post season against Grand Junction Central where they suffered a tough loss in Round 1.

Nick, a two-sport athlete early on in his high school career, made the decision to focus on baseball and stay sharp at his craft. By focusing exclusively on baseball, Terry says Nick began to devote his time to training as if he were already a pro.

The Shumpert’s sought out Loren Landow, Director of Sports Performance at Steadman Hawkins Clinic in Denver, Colorado to take the gifts Nick already possessed and enhance them further to prepare for the rigors of professional baseball.

The goal: to build off his athletic ability. Blending elements of speed, power, footwork, agility from our genetics, large components that can be trained. It was a fine tuning that took Nick to the next level in his training.

“Nick started with me a few years ago, and the goal was to build off his athletic ability,” Landow mentions. “He’s the perfect storm of athleticism – he now looks the major league part, but has the speed, strength and quickness as a senior in high school that most don’t have.”

Getting to that point meant working on developing his speed out of the box; resisted harness work that allowed Nick to drive with more force and power, not only with the stick but with his legs also. Strengthening the core, or “trunk” as Landow mentions, allows an athlete more power in the hips when sprinting.

In the weight room, they kept it basic, maintaining good lower body strength and utilizing exercises as simple as bench press for upper body, all the way to more dynamic, centralized exercises like a one-arm dumbell row which provides stability and strength in the shoulders and arms.

“When I look at Nick, I see a genetic gift, but also extremely coachable with an outstanding work ethic,” says Landow. “Nick is professional to his approach to workout, his desire has never been in question. He’s going to do the work in front of you and grind. Nick checks off all the boxes with a coach/player relationship. It’s important for coaches to understand that you can look at all the numbers you want, but Nick is extremely hungry and he’s going to be a can’t-miss prospect.”

Nick’s decision to stick to baseball, ending his football playing in 8th grade and basketball in 10th grade, was 100% his decision, Terry says.

“Being a former ballplayer myself, I didn’t know what was going to happen or if he was even going to stick with baseball. He’s continued to go the route for baseball, and that’s icing on the cake. It’s a blessing to watch him have the spring season he’s had after a great summer and fall last year, it’s very rewarding and a blessing for him to continue the process.”

The process indeed moves forward. Nick, a Baseball Factory alumnus, attended the 2014 Under Armour Southwest Championships as an 18 U (18 and under) participant.

“I remember my first experience with Baseball Factory,” Nick recalls. “The showcase I participated in was ran and organized well and had a lot of fun doing it.”

Terry adds, “I would encourage any young kid to look and see when a kid comes out of your city and is successful, you want to know the route they took and what they did. Attend as many events as you can. It’s a great opportunity to come out and be seen.” 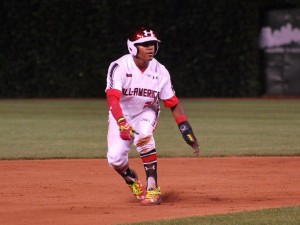 Following in the footsteps of another means setting out on a path blazed by someone that has done it before. Nick knows making a name for himself will take him far, but having a father who knows what it takes to be a major leaguer is something that gives his pride.

“I’ve always thought about following my Dad in his career, since I’ve been little follow in his footsteps, playing the game the way he did, playing it the right way, makes me proud to carry the name on.”

Terry, who once went through the draft process as a second round selection of the Kansas City Royals in the 1987 draft, understands the rigors of climbing the ladder for an organization that drafted you and recently offered his son some sage advice.

“Sounds cliché, but, really, I tell Nick, its like playing when you were 7, 8, 9 years old – just go out there and have fun,” Terry says. “I learned this from Derek Jeter, the reason he was always so calm and settled, is because he embraced the moment – he was out there playing to win. If you’re concentrated on things you need to do, the pressure to perform is never there. If you’re a good player, you’re going to perform anyway. I tried to instill those things in Nick and I think he’s taken it and run with it.”

The daily dedication and preparation to practice, in addition to his academics, have kept Nick focused on his singular goal. Despite his life seemingly going 100 miles per hour, he doesn’t seem to be bothered by it. Playing for a state championship? Committing to the University of Kentucky? Being drafted this June? No problem.

“He’s able to enjoy his senior season, and I think that’s great, because sometimes athletes can get caught up in so many different things,” Terry explains. “I’ve told him before, don’t lose sight of the process. That wasn’t my story, and shouldn’t be his either. Winning championships are fun, but, every game I wanted scouts to be watching… (I would) often ask my coaches who was going to come watch me today.”

Terry adds, “Your whole life, you want to be an MLB player, the opportunity is so close.  Go have fun with it, enjoy the game. You spend time playing in tournaments and championships. This time they’re out here to watch just me. I told Nick to embrace it, I absolutely loved playing in front of those guys and put a show on for them to get best draft position I could so you can make it to the majors.” 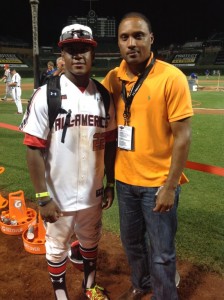 Nick with his father, Terry Shumpert.

Terry and Nick discuss many things almost daily – among them where he could be drafted this June.

Nick has committed to the University of Kentucky, the same school where his father once attended and played. But he could also be selected by a major league team near the top of the draft in a few short weeks. Terry likens their situation to what a legendary rapper and his son went through.

“I watched Snoop Dogg (Calvin Broadus) and his son on their reality show, (His son, Cordell was the topic of an ESPN show, entitled “Snoop and Son: A Dad’s Dream) and Snoop always wanted his son to go to USC, and, in the end, selected UCLA, so you never truly know what your son is going to do. I always knew he was a Kentucky fan, so when they offered him a chance to play there, it was just another time for a Dad to be proud, and even more so because he doesn’t mind going the route that I did.”

Even at this most crucial time in his life where he’s continuing to develop his game and himself, Nick is able to lend words of advice to up-and-coming ballplayers who want to be the next to play in the All-America Game, on the same field like Nick once envisioned.

“Always stay focused and work hard no matter what. Listen to people around you giving you good advice. Whenever you’re down, keep going and keep fighting, because baseball is one of the hardest games mentally, so you have to keep going and keep strong.”