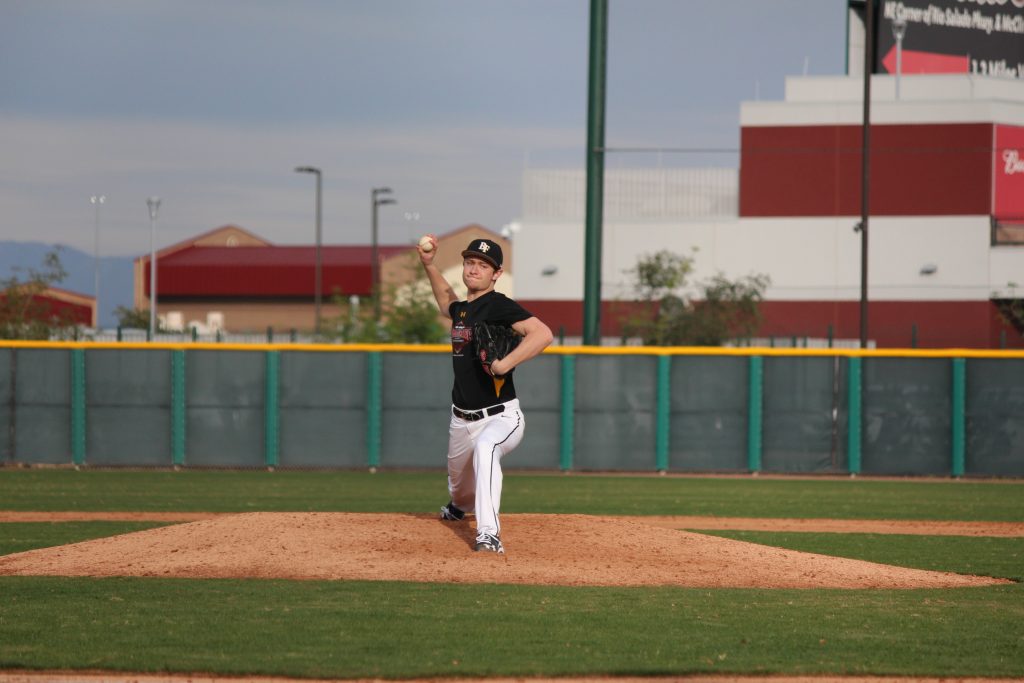 Clementoni throwing at the 2016 Under Armour All-America Pre-Season Tournament.

2016 RHP Matt Clementoni is a senior at Morris Knolls High School in Rockaway, NJ and the Baseball Factory standout who has attended 13 events since we first saw him in the summer of 2011, is set to continue his education and play at the next level, aiming to be a pitcher for successful Division I program, Saint Peter’s University in Jersey City, NJ.

“He’s one of my all-time favorite players,” said Dan Forester, Senior VP of Player Development for Baseball Factory. “Matt is an incredibly hard worker with the drive to get better, starting with the first event that he attended.”

Matt’s first event was an Interactive Video Program event in Trenton, NJ as a 12 year-old in 2011 and his father, John, mentions that it was his son’s first chance to show what he had on the “big field” of a pro-style workout in front of coaches and scouts.

“That tryout in Trenton was Matt’s first experience and I felt it was important for him to get a chance to perform in front of scouts to hopefully get used to that atmosphere,” John said. “This would help him to relax later on during the numerous events he attended down the road.”

Five months later, Matt attended his first Baseball Factory Player Development event, joining other top players his age from across the country in a tournament-style event. He participated in the Vero Beach Christmas Camp and Tournament, playing on the hallowed grounds of Historic Dodgertown. Matt showed the flash of potential there, throwing well on the mound with a good, sinking fastball that he kept down in the strike zone. Scouts noted that with his skills and athletic abilities, he would only continue to get better and go far in the game of baseball.

Each time Matt attended a new event, his goal was to show continued improvement from the last time Baseball Factory scouts and coaches saw him. He worked hard at various events along the east coast, attending numerous Under Armour Baseball Factory National Tryout and College PREP events, gaining crucial video of his strengths and weaknesses and getting it out to coaches who were interested in what Matt could do on the field.

“My experience overall with the Baseball Factory has been great,” said Matt. “I have enjoyed every single event I have attended. I feel the Baseball Factory atmosphere has significantly helped me develop by making the events very professional. I always felt I was a pretty good player but each evaluation gave me something to work on and improve and that always contributed to the player I have become today. A very confident player each time I step foot on the mound.”

“We saw him many times to receive updated evaluations and each time we saw him, he got better and better and it showed across the board with his tool set,” said Forester.

Throughout 2013 and 2014 as he continued attending tryouts to work on little parts of his game, Clementoni began to advance further on the mound. In late 2014, he played in another high-level Player Development event in Arizona, this time the Arizona Junior Fall Classic where he received high praise with his ability to throw his pitches for strikes along with a great mound presence.

“The AZ Fall Classic was an important event for me,” said Matt. “It helped me see who I was competing against across the country and how hard I needed to continue to work with all the talent I played with and against. I enjoyed my time in AZ and made friends I still talk with today.” 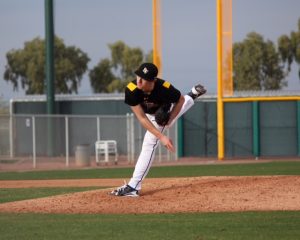 This past January, the culmination of nearly five years of work with the Factory landed him in Mesa, Arizona for the Under Armour All-America Pre-Season Tournament where he continued to show well on the mound.

“The Pre-Season All-American event was my favorite event by far,” Matt mentions. “It was an awesome atmosphere in Sloan Park and the rest of the complex. The competition was great and it was nice to do well on the mound in my outing at the event. The complex was top of the line and makes me excited and eager to get there hopefully one day and I will continue to work hard to get there one day. I made new friends as well there and I highly recommend this event to whoever gets invited in the future.”

“I want to thank the Baseball Factory for providing Matt with the opportunity to attend some great events throughout the past few years, like the Under Armour All-America Pre-Season Tournament in Mesa,” said John. “He had a great time, and made some new friends too that he still keeps in touch with.”

The skills learned at Baseball Factory events are helping him in his final year as the leader for Morris Knolls as he leads the team in victories with three. Two of Clementoni’s victories were complete games, one of which he went eight innings. Overall, the righty now has 10 varsity wins in the last 2 1/2 seasons.

“Matt has worked incredibly hard over the last four years to improve significantly as a pitcher,” says Eric Mindrebo, Matt’s head coach. “His work ethic and attention to detail sets a great example to the younger players on our team. One of his strengths is his mental approach to pitching which will serve him well at the next level. I am excited to see his continued growth both this season and in college.”

The dream and the fire to play baseball at the next level has been a long time coming according to John, who mentioned that Matt’s goals and dreams started well before he stepped on a high school mound.

“He has wanted to play college baseball since his last year in Little League,” John mentions. “Matt has worked extremely hard to improve his skills throughout the calendar year. His Baseball Factory Coordinator, Mr. Forester, was very instrumental in providing direction and encouragement. Most importantly, he convinced him that it was very necessary to perform his best in school. He told him that college coaches would put a great deal of emphasis on grades when making recruiting decisions.”

Matt has placed an emphasis on his focus in the classroom, working hard during his high school years to make sure that his grades would never be a reason he did not get recruited. John mentions that his son has maintained a 3.4 GPA and has made the honor roll multiple times, while taking AP and Honors classes. Now, that hard work in the classroom and on the field has paved the way to Saint Peter’s University and a new chapter set to unfold.

“As his only parent, I am very excited for him that he will get the opportunity next season to pitch for Saint Peter’s University. I know how hard he has worked to achieve his goal, and was happy to help him in any way I could during the recruiting process.”

Without the crucial recruiting process and emphasis on school and grades first are some of the major factors in Matt looking towards his next step of playing collegiate baseball.

“I’m very grateful that I have the opportunity to play at the Division I level next year at Saint Peter’s University,” said Matt. “I put a lot of hard work in to making next year possible. It has been a dream of mine for awhile to play at the college level and I’m excited to see what the future has to come. I look forward to helping out the program on the mound and help win the MAAC conference against schools like Marist, Monmouth, and many more good schools. But none of this would have been possible if I didn’t emphasize my focus on my school work. Mr. Forester always told me how important it was to do well in school and I thank him very much for helping me work hard because my education will always come first.”