The AL and NL starters and reserves have been announced for the 88th MLB All-Star Game emanating from Marlins Park in Miami on July 11th with Baseball Factory and Team One alums across the board on each league’s rosters. It’s a changing-of-the-guard kind of feel going into this year’s game as 23 first-time selections were recognized for their contributions to the first half of the season. 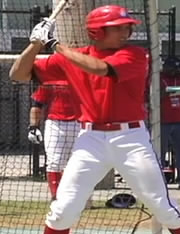 Here are the Baseball Factory/Team One alums who were selected to start in the game:

The Houston Astros lead the way with five selections to the All-Star Game, bolstered by the game’s best record (currently 56-27) led by outfielder George Springer, who makes his first All-Star appearance, hitting .287 with 24 homers, 52 RBI and a .577 slugging percentage, good for fifth in the American League. Baseball Factory first saw Springer at a June 2007 Under Armour Baseball Factory National Tryout in Needham, MA and a month later, played in the prestigious Cape Cod High School Classic.

In the NL, Washington Nationals second baseman Daniel Murphy makes his second consecutive appearance and third overall in the All-Star Game and is repeating his 2016 season, one in which he finished second in NL MVP voting, with a season to this point that is on the same pace. Murphy’s hitting .334 with 14 home runs and 55 RBI. Murphy played in the 2002 Team One South Showcase.

The Colorado Rockies will have four representatives at the All-Star Game, led by third baseman Nolan Arenado who continues to put up MVP-like numbers after two consecutive 40-plus homer seasons. Arenado continues to hit for a high average, currently at .298 along with 15 homers and 62 RBI, tied for third-most in the NL. Add to it his stellar defense, as he looks to claim his fifth-straight Gold Glove at seasons end. His .991 fielding percentage through 82 games leads all NL third baseman. Arenado, a native of Newport Beach, CA, participated in the 2007 Ryan Lemmon Sophomore Showcase as well as the 2007 Team One West Showcase.

Bryce Harper makes his third consecutive All-Star appearance and third straight start for the National League, again putting up MVP-caliber numbers on a potent Washington Nationals lineup, hitting .318 (fifth-best in NL) 20 homers (sixth-best) and 62 RBI (tied with Arenado). Harper has drawn 52 walks and his 1.025 OPS is third best in the NL. Harper attended a February 2008 Under Armour Baseball Factory National Tryout in his hometown of Las Vegas, NV. Harper also received more All-Star votes (4,630,306) than anyone else in baseball.

Outside of the position players selected to start in the game, there were also a handful of pitchers and reserves who are looking to help their league gain home-field advantage in this year’s World Series.

McCullers Jr., has taken the next step forward this season on an outstanding Astros pitching staff, making 15 starts and going 7-1 with a 2.69 ERA and 103 strikeouts in 87 innings pitched, holding opponents to a .212 average. Lance was a 2010 Under Armour All-American.

2017 has been a renaissance season for the 34 year-old Vargas as he gets his first All-Star nod in his twelfth season in the majors (fourth with the Royals). Vargas was selected by his peers with impressive numbers, going 12-3 with a 2.22 ERA (both categories lead the AL) in 16 starts. Vargas played in the 2000 Team One West Showcase.

After being traded by the Kansas City Royals to the Cubs this past offseason, Davis’ production as the team’s closer has not slipped one bit, posting a 1.93 ERA and 0.96 WHIP at the time of this writing, converting all 16 save chances. Davis participated in the 2003 Team One National and Team One South Showcase.

Arizona is one of the surprise teams in the majors this season, sitting just 2 1/2 games behind the Los Angeles Dodgers for the top spot in the NL West and the old vet Greinke is a big reason for that, posting a 10-4 mark with a 3.05 ERA with 124 strikeouts and just 22 walks in 109 1/3 innings pitched. Greinke makes his first All-Star team with the Diamondbacks and played in the 2000 Team One East Showcase. 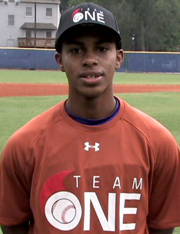 Francisco Lindor at the 2009 Team One South Showcase

Lindor makes his second straight All-Star team, this year as a reserve for the AL Central-leading Cleveland Indians. While the batting average is down from last year, Lindor’s 14 home runs are just one off his career high and he’s driven in 38 while supplying outstanding defense, committing just five errors in 315 total chances. Lindor participated in a February 2009 Under Armour Baseball Factory National Tryout in Bradenton, FL and played in the 2009 Team One South Showcase.

Harrison was voted in by his peers, marking his second-straight All-Star Game as a key reserve who is versatile and can play second, third, left and right field. Harrison is hitting .288 with 16 doubles, two triples, nine homers, 27 RBI and 10 stolen bases in 79 games.

Fans can vote until 4 PM on Thursday and the final vote will be announced Thursday at 6 PM on MLB Network.