On Sunday, January 25 the Under Armour Baseball Factory National Tryout tour made a stop in the Myrtle Beach area at Carolina Forest High School.

For some of us, it can be somewhat difficult to think about anything other than golf in this part of the country. But, thankfully, we had a talented group of players on hand to keep us focused.

Power is always of particular interest, and a pair of corner infielders showed glimpses of it during batting practice.

2015 3B Daniel Oxendine (Lumberton HS – St. Pauls, NC) notched an exit velocity of 92 mph, while his grip strength checked in at 149 psi (the highest recorded at any of the Baseball Factory events on this date) – both numbers are certainly indicative of a player that can hit the ball a long way, which he did in impressive fashion.

6-foot-3 240 pound Aaron Miller (1B – 2016 – Ashley Ridge HS – Summerville, SC) also drove the ball with authority. He earned high marks for both raw power and hitting ability, thanks to a balanced approach and a short stroke with strength through contact. 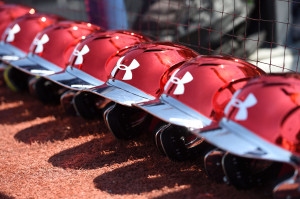 It isn’t common to see high school age players without any glaring weaknesses, but we had a few like that at this event.

2016 C Gabriel Austin (Ashley Ridge HS – Summerville, SC) posted the low pop time of the day. He ranged between 1.87 and 2.01, and touched 87 mph at the raw velocity station (also best of the day). He’s more than just a catch and throw guy though – he showed the athletic ability to move from a crouch to block, along with the softness and strength required of a high  level receiver. The ball got off his bat at 88 mph, confirming his ability to translate bat speed into hard contact.

2016 1B Michael Calamari (Myrtle Beach, SC HS) featured defensive actions not commonly seen from a corner infielder – he showed lateral quickness and a quick release, both especially valuable traits for left-handed throwing first baseman. His offensive approach was sound, with good balance and a level and direct path. At 87 mph off the bat (he hits left-handed too), there is evidence of raw power in addition to pieces of a good hit tool.

2016 SS Brendan Green (AC Flora HS – Columbia, SC) featured range to move, soft hands to play the ball, and a quick release to complete plays in the infield. He was accurate with the barrel to contact, allowing him to hit the ball to all fields. He showed enough bat speed and strength to generate some raw power as well.

The top velocity on the day was turned in by 2016 RHP/SS Cody Freeman (Red Springs, NC HS). He topped at 89 with late arm side run, while his best offspeed offering appeared to be his 75-78 mph change. A capable two-way player, he swung the bat with authority and was solid defensively.

2016 RHP/OF Michael Van Buren (Hanahan HS – Goose Creek, SC), another two-way guy, showed an 80-84 mph fastball with arm side run. His arm worked well and his delivery was fluid. He stands 6-foot-3 and 170 pounds, and posted impressive numbers of 6.86 in the 60 yard dash and 9’3″ in the broad jump. He is clearly a talented athlete, and the type that you feel good about projecting and dreaming on.

At 6-foot-2 and 175 pounds, RHP Eric Dubose (Mayo HS for Math, Science & Technology – Darlington, SC) has length to his frame and room to fill out. His arm worked loose and quick, though he hasn’t yet fully harnessed his length to leverage the ball downhill. His fastball was 81-83 this day, while his slider flashed depth up to 78 mph – this pitch serves as an indicator of a potential fastball velocity jump.