Our first look at 2017 C Golston Gillespie (Hull, GA) since the 2015 Under Armour All-America Pre-Season tournament was this past Sunday, at the Douglasville, GA Under Armour Baseball Factory National Tryout. Gillespie earned top 10 honors among 2017 graduates a little more than a year ago in Arizona, and has committed to the University of Mississippi since then. He’s an interesting athlete at 6-foot-3 and 210 pounds, and we’ve seen him run as well as 6.89 in the 60 yard dash. He’s also a switch-hitter with quick hands and strength to impact the ball, as evidenced by the 92 mph exit velocity he posted most recently to qualify among the class of 2017 leaders.

Though both fell just short of leaderboard qualification, his raw velocity increased four ticks from 82 to 86 mph while his low pop time fell from 2.11 down more than one tenth to 2.00.

The next highest exit velocity came from 2017 6-foot-3, 200 pound OF Dalton Westbrook (Salado, TX) at 91 mph. In close pursuit just one tick back at 90 mph was fellow 2017 OF Gant Darden (Eatonton, GA). Darden’s 90 mph marked an improvement of six mph since we last saw him in late October 2015 at the Peachtree City, GA Under Armour Baseball Factory National Tryout.

A pair of 2018 3B also reached 90 mph to enter a tie for the 9th best exit velocity we’ve seen so far from that class. 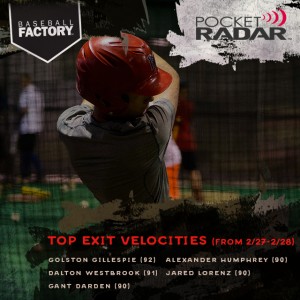 As of the the December 2015 Baseball Factory Christmas Camp & Tournament at Pirate City, 2018 3B Alexander Humphrey (Ellenwood, GA) was up to 85 mph exit velocity and 75 mph raw velocity. In addition to the five mph exit velocity jump he posted most recently in Douglasville, he added an impressive eight mph to his raw velocity with a move up to 83 mph.

85 mph earned a tie for 8th among the 2019 class as of our events through February 29. We saw RHP/SS Hayden Keidl (Abilene, TX) and SS Kameron Guidry (Snellville, GA) reach that number, with one more close on their heels. Keidl also qualified among 2019 leaders in the 60 yard dash (7.00), raw velocity (84 mph) and fastball velocity (79 mph), while Guidry qualified among raw velocity leaders at 79 mph. One tick back at 84 mph, and now inside the top ten, is 2019 C Caleb Munton (Abilene, TX). He’s posted improvements of 3 mph at two month intervals, up from his original 78 mph in October 2015 to 84 mph most recently, with a brief stop at 81 mph in December 2015 at the Baseball Factory Christmas Camp & Tournament at Pirate City.

CLICK HERE for the Top Exit Velocities from Baseball Factory and Team One events through February 28, 2016.