During this year’s Baseball Factory All-America Pre-Season Rookie Tournament, Roy Halladay sat front row in the bleachers to watch his son Braden compete in the same type of event that he once did. Roy has a special place in Baseball Factory history, part of the first wave of talent to participate in the 1994 Team One National.

Halladay won 203 games over 16 seasons in the Major Leagues with the Toronto Blue Jays and the Philadelphia Phillies and was named a Cy Young award winner twice. Halladay, who once pitched a no-hitter in the post season, now turns his focus to 15-year old Braden, a 2019 graduate from Calvary Christian High School in Clearwater, FL.

Braden is a talented right-handed pitcher who began his Baseball Factory journey by participating in a College PREP event in Tampa, FL last November. As easy as Roy’s talent was to spot, so too is Braden’s and that led him to Auburndale, FL last weekend to participate against other top talent from around the country. 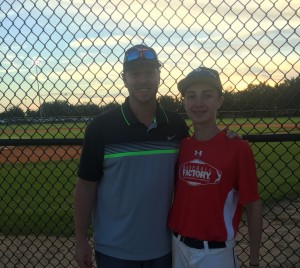 Roy with his son Braden at this year’s All-America Pre-Season Rookie Tournament.

During the event, Roy’s reach spread beyond Braden, offering detailed notes to players with certain things to work on for the upcoming season. Just another way that Roy is offering up to give back to the game he has loved for so long.

Rob Naddelman, President of Baseball Factory, sat down with Roy for a one-on-one, candid conversation about his own upbringing through these events and advice he desperately wants young players to know.

Rob Naddelman: How did you first hear about Team One Baseball?

Roy Halladay: My Dad did a lot of setting things up for me when I was a kid. We found out about it and back then, it was a little different. We traveled out of state to it. Being in Florida, we’re spoiled, we get a lot of it down here. We saw a lot of talent and I remember two or three tournaments I went to as a high school player and there were an overwhelming amount of scouts. The scouts knew that the players were there and Team One was one of those events.

RN: What were your initial thoughts of the Team One event you attended and what was the talent level like?

RH: I think it really helps get your name out there and I think once your name is out there, then it gets passed around and more people start to come see your play. I think initially, myself being out of Colorado and a small school, you have to do some of those things to get people to see you. You definitely have to reach out and put yourself in the right spot to try and get yourself noticed before they’ll come see you.

RN: What advice would you give to other kids thinking about attending a Baseball Factory/Team One event?

RH: I would say try not to do too much, let the things you do well stand out and showcase those skills. If you’re a small-ball guy who can bunt and run, then do that. Show your strengths. Don’t come to an event and get away from what makes you successful.

RN: How crucial is player development in your eyes? Not just with on field-development but also with character outside of the white lines?

RH: These tournaments are perfect but you have to make sure you stay in shape for them. Guys will take time off and then show up and throw and if they’re throwing as hard as some do, they’ll get hurt. Being in shape is crucial. During the season, you have to monitor things. Anything over 100 innings, you’re getting into the danger area. Know yourself. If you’re an elite velocity-guy, your chances of having surgery are much higher, especially at a younger age. As far as attitude goes, be coachable, be willing to learn to be better and be respectful.

RN: You had a very long and successful career in the major leagues, how rewarding is it to now see your son playing in the same type of events and having success?

RH: It’s been fun, he (Braden) has always loved the game so much and the last couple years, he’s developed more and become a better player, so it’s been fun to watch. I haven’t pushed him too much, so anything he’s learned, he’s done from watching or seeing other people. I let him do his thing and he’s getting to the point where its about to get serious, so I may give him some pointers then. But, up to this point, he’s been very hands-off, self-motivated and driven.

RN: What is the biggest takeaway for you in the way Baseball Factory impacts the lives of the players and families?

RH: I think it’s a phenomenal event where the focus is put on the kids. You don’t hear parents yelling, there’s not bickering. The kids are here learning and showcasing their talent and getting their name out there. There’s nothing but positives for these kids and anytime you can take a chance to get your son involved in something like Baseball Factory, even if it doesn’t turn out to be a career for him or play at college or another level, it will be something he’ll remember the rest of his life and there’s no negative involved with it whatsoever.