With many talented players descending on Azusa Pacific University’s field for the Under Armour Baseball Factory Team One West Showcase, the deepest position was found behind the plate. Several catchers flashed high level tools and the ability to use them in games. 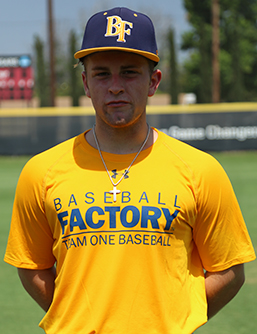 Leading the pack was 2016 Under Armour All-American selection Christopher Troye (Brentwood, CA/UCSB). At 6-4, 210 pounds, he commands attention in his uniform and his skills keep that attention. He took an impressive BP using a short, quick swing and squaring up nearly everything thrown his way. Carrying that over to game play, Troye went 3-for-6 with several hard hit balls. He threw a 1.78 to second base in workouts and showed well as a receiver in games. Flashing his athleticism, he also clocked a 7.09 in the 60.

Another complete catcher who turned heads at the event was Zach Presno (Clovis, CA/Fresno St). After outstanding workouts that saw him run a 6.99 and throw a 1.83 to second, Zach had a double and home run in games while handling all pitchers very well. Left-handed hitting Justin Mazzone (Huntington Beach, CA) used his advanced approach and sweet swing to go 2-for-5 with a double and two walks. He is a polished hitter with a 1.88 release time who looks to be a run-producer from the catching position at the next level. Adding to the group of catchers that showed well were Kyle Bowser (Temecula, CA) who is an outstanding defender and offensive-minded Alexander Bejjani (Indio, CA).

Two young 2018 grads also stood out at the catching position. Left-handed hitting Colton Cassinelli (San Tan Valley, AZ) showed an advanced approach at the plate that led to a solid batting practice and a 4-for-6 game effort with a double. He also threw a 1.87 to second base and showed very good receiving skills. Fellow rising junior Jacob Shanks (Corona, CA) also showed promise. With present strength, he swung the bat with authority flashing an aggressive hack that resulted in several hard hit balls in competition. He also showed feel for the position and threw to second in 1.94 during the workout.

Catching is a premium position that is usually hard to find, but there was plenty of it on display at the Team One West event.