The Rays win and cap off a great week here for our Middle School Session 2 group here at Pirate City pic.twitter.com/qEszS4Owzq

On Sunday, April 12 the Under Armour Baseball Factory National Tryout Tour rolled through the Dallas-Fort Worth Metroplex. For the last three years, we’ve held our Team One Futures Texas Showcase at John Paul II High School in Plano, and now the field-turf facility is in the rotation for North Dallas area Tryout Tour stops as well.

As I’ve written before, an abundance of notable run times is no cause for concern at a synthetic surface ballpark. On this day, we had seven players post 60 yard dashes below 7.0 seconds. However, unlike the runners, the four players that reached 90 mph raw velocity got no help at all from the turf.

2017 SS Donovan Langston (Liberty HS – Frisco, TX) led all players with a mark of 92 mph. Langston was listed as a switch-hitter on the roster, but only hit right-handed during the workout. He showed hand-eye coordination along with bat speed to make hard contact, and featured athletic defensive actions to go with his standout arm strength. He stands at 5-foot-9 and 160 pounds, and posted a respectable 7.08 in the 60 yard dash. 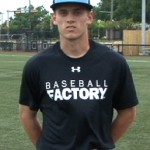 2015 OF Alec McGehee (Wakeland HS – Frisco, TX) was among the leaders in several categories, including raw velocity where he posted 90 mph. He stands an impressive 6-foot-4 and 195 pounds, bats and throws right-handed, and ran 6.83 in the 60 yard dash. The ball got off his bat at 85 mph, just one tick off the top mark of the day. 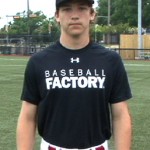 Coleson Klein received high marks on the Baseball Factory 10-70 Scouting Scale for each of his tools. Arm strength graded out the highest, as supported by his 88 mph raw velocity. Fielding ability and hitting ability were even, followed by raw power. The ball left his bat at 85 mph, mainly thanks to strong and quick hands. 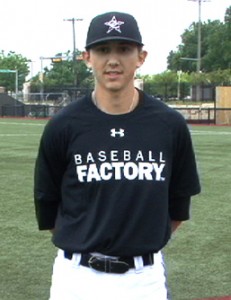 Glenn Chas Pedersen has been steadily climbing since we first saw him in February 2014. At that event, he ran 7.15 and posted 80 mph raw velocity. Four months later he’d improved to 7.00 and 85 mph. Now, a little over a year since we first saw him, he improved raw velocity from 80 to 88 mph and lowered his 60 yard dash from 7.15 to 6.96. His subjective grades have improved at pretty much the same pace — such that he now owns highly advanced field, hit and arm tools. 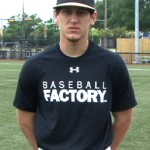 Jacob Smith topped at 82 mph with his fastball, even though he posted 88 mph raw velocity. There is no guarantee arm strength shown on flat ground will translate to the mound — as we saw here. However, he threw his breaking ball up to 81 mph — which is enough to indicate a future fastball with more velocity than we saw today. He is a good athlete with 7.03 speed in the 60 yard dash, and enough strength and coordination to produce 85 mph bat exit velocity. 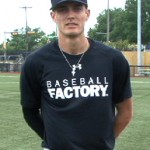 At 6.60, 2016 OF Ty Sawka (McKinney North HS – McKinney, TX) was easily the best runner of the day. A switch-hitter listed at 6-foot-2 and 170 pounds, he showed the makings of a solid move from both sides of the plate. He posted 86 mph raw velocity, and moved with athletic actions defensively. 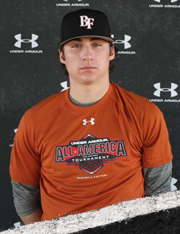 We’ve now seen 2017 SS/RHP Ryan Vilade (Frisco HS – Frisco, TX) three times, and he’s never run all that well or wowed in terms of measurables for that matter. He has however, always shown an advanced bat — and that’s what really counts in terms of future value.

The best we’ve ever seen him run was a respectable 7.22, which he posted in Plano in March 2015. He does everything with so much ease, I still believe if he wanted to he could run better — and the times we’ve seen him in games, he does run much better down the line than in the 60 yard dash.

The most important tools for his profile are firmly in place, such that he stands to be among the top 2017 graduates in the entire country.

2017 1B Kyle Landers (Flower Mound HS – Flower Mound, TX) is an interesting follow as an advanced left-handed hitter. He is listed at 5-foot-10 and 170 pounds, took an impressive round of batting practice, and showed the makings of solid defensive ability at first base.

The best raw power of the day belonged to 2016 1B Kalen Haynes (Byron Nelson HS – Trophy Club, TX). Listed at 6-foot-6 and 250 pounds, Haynes featured a strong left-handed stroke with leverage and the ability to create backspin. He actually cuts his stroke off out front, and can get his back side through better to let his hands work more fully through the zone. 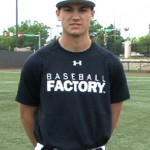 2017 C Chase Hacker (Farmersville HS – Farmersville, TX) posted 1.95, along with 85 mph raw velocity and a 7.07 60 yard dash. His measurables indicate a well-rounded set of tools, and his grades on our scouting scale agree.

Though he was among the youngest players in attendance, you wouldn’t have known it by watching 2018 C Brady Disher (Byron Nelson HS – Trophy Club, TX) workout. He posted workout pop times between 1.99 and 2.05 after recording 85 mph raw velocity. A left-handed hitter, he went on to show exciting bat speed during batting practice – such that a future hit-power combination is a real possibility.

A couple of tenths behind at 2.01, but keeping pace at 86 mph raw velocity was 2016 C Landon Gray (2016 – C – Granbury HS – Cresson, TX) — another left-handed hitter with a promising combination of offensive and defensive skills.

2016 RHP Tyler Follis (Sulphur Springs HS – Sulphur Springs, TX) topped at 84 mph and showed a low 70s breaking ball with exciting future potential. He has an excellent frame at 6-foot-3 and 190 pounds, and looks like he can grab more velocity down the road. 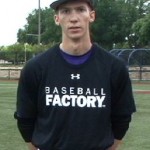