May 16 Dom Pasquale NewsShare This Article

Prior to facing off in the 2017 NLDS, both Austin Barnes of the Los Angeles Dodgers and Jake Barrett of the Arizona Diamondbacks, attended Baseball Factory events, played PONY baseball, and were teammates together at Arizona State.  Throughout this 2018 regular season, these two players and their respective teams will play each other 18 times, with the possibility of playing against one another in the postseason. 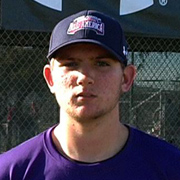 Jake Barrett was the 120th overall selection in the 2012 MLB Draft by his hometown team, the Diamondbacks, when he came out of Arizona State. While still living in Upland, CA, Barrett played Upland PONY baseball. Four years before being drafted, in 2008 Barrett attended a Baseball Factory National Tryout in Phoenix, Arizona. His performance there led to his selection as an Under Armour Pre-Season All-American that same year.

As a junior at Arizona State, Barrett was given the opportunity to be the teams closer. That year, in 2012, he would record 11 saves and have a .179 opposing batting average with a 1.62 ERA. Earning him an Pac-12 All-Conference honorable mention and a Baseball America Preseason Second Team All-America selection. However, when he came on to campus as a Freshman, Barrett was given the 8th inning role and dominated. He would have a 2-0 record picking up two saves and strike out 43 batters in just 29 innings. His performance that year led him to get a spot in the rotation the next year as a Sophomore, mainly as the Sunday starter. Another member of that starting rotation? PONY and Baseball Factory Alum, Trevor Williams.

While he has just recently been reassigned to AAA Reno, Barrett has spent parts of the last three seasons with Arizona’s Major League team. While in the Big Leagues, Barrett has thrown 87.1 innings, has struck out 83 batters, and has maintained a 3.92 ERA. The longest amount of time he has stayed with the Big League club was the first year he got called up. Barrett would throw 59.1 innings in 68 games that year, striking out 56 batters with a 3.49 ERA.

Before catching Jake Barrett on Sundays at Arizona State, Austin Barnes played in the 2007 Palomino WS for his hometown in Riverside, CA (Redlands Baseball/Softball for Youth). That same year, Barnes attended a Baseball Factory National Tryout in Irvine, CA.

During his Junior season at ASU, Barnes hit .320 with a .444 SLG with 14 doubles and 15 RBIs. He would lead his team in pickoffs with four, and have the second most putouts at 288. This productivity on the field led him to be selected in the 9th round on the 2011 MLB Draft by the former Florida, now Miami Marlins.

After playing four different levels of Minor League ball (AA being the highest) in the Marlins Farm System, Barnes was traded to the Los Angeles Dodgers where he was immediately sent to AAA. That trade involved, at the time, All-Star second baseman Dee Gordon and pitcher Dan Haren in exchange for Barnes, Kike Hernandez, and two more prospects. Barnes played 81 games for the Oklahoma City Dodgers (AAA) where he hit .315 with 9 HRs and 42 RBIs before being called up in late May. He would finish out the year with Los Angeles and play 20 games. Last season, Barnes, provided valuable playing time as the team’s backup catcher, where he made 49 starts, while also playing some second base. He hit .289 with eight homers, 38 RBI and 15 doubles in 102 games.

Barnes has established himself as a valuable utility player who can catch at the Major League level and play second base. He has been split evenly between those two positions this year, playing thirteen games at 2B and catching eleven games. Barnes has shown a keen eye at the plate, collecting 15 walks in 83 plate appearances so far in 2018.