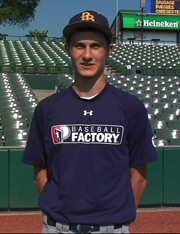 Baseball Factory alum Schuyler Martire was recently selected as an Honorable Mention representing Brevard College, a Division II school in North Carolina after a vote from league coaches from within the South Atlantic Conference.

Martire, a native of Pine Bush, New York, is a 2013 graduate from Pine Bush High School and always had a dream of going to the state of North Carolina to play collegiate baseball. After attending numerous Under Armour Baseball Factory National Tryout and College PREP events, Schuyler also competed in high-profile Player Development events like Pirate City Select Training as well as the Christmas Camp & Tournament in Pirate City, Advanced Hitting Weekends and the prestigious Cape Cod Pro Select Training. It was Schuyler playing well at these events that got him looks from colleges and soon sought after by Brevard coaches to play for the Tornados.

“My experience with the Baseball Factory helped my game greatly,” said Schuyler. “It gave me the fundamentals I needed in order to improve my game and excel. I had a great time playing against kids from all over the country in a competitive baseball environment. The thing that I found most helpful was the college information process. It was eye opening that college baseball does not have the most scholarship money, like football or basketball, so grades are extra important.”

Becoming the team’s starting second baseman by the second half of the season, Martire started 31 games for the Tornados, hitting .325 with four doubles, 14 RBI and 18 runs scored. His .325 average was good for third-best on the team this season. His stellar play leading to the honor also happened against top competition in the South Atlantic, as Schuyler recorded a four-hit day against defending national runner-up Catawba in the beginning of April.

“It’s an honor to be recognized by the coaches for my play on the field in getting the conference’s Honorable Mention. I put a lot of hard work in the off-season and I’m happy it paid off. In baseball, all you can do is control what you can control. If you do that to the best of your ability you will be alright.”

Schuyler was a very strong player during his time at Baseball Factory events, beginning with his first National Tryout in Troy, NY in June of 2010, working hard to improve his hitting numbers and becoming a steady defender at second base.

“It’s great to see the success Schuyler is having on the diamond at the collegiate level,” said Adam Darvick, Schuyler’s Player Development Coordinator. “When we first saw Schuyler at Joe Bruno (in Troy, NY) back in 2010, there was a lot of work to be done, but I had no doubts about the hard work he’d put in to make it to the next level. He was always the type of kid that was willing to work his tail off. Year-to-year, he made strides in his game and showed improvement and now it’s showing at the collegiate level. Not only on the field, he also knew what it took off the field and understood academics was the number one priority because he knew if he wasn’t getting the job done off the field he couldn’t play. I’m definitely proud of him.”

According to the article on the Brevard College Athletics website, Schuyler, a transfer from Orange County Community College, helped lead Brevard to its fourth-highest fielding percentage since joining NCAA play, turning 39 double plays and only committing one error in his chances during the month of April.