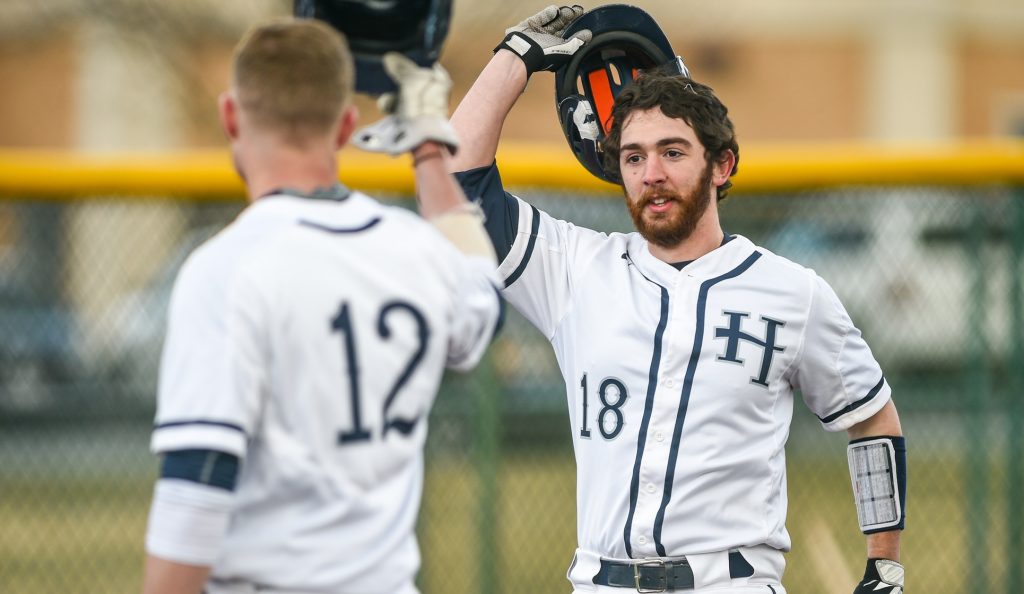 On March 11, 2015, the Hood College Baseball Program in Frederick, Maryland played its first-ever NCAA Division III game – a win over Penn College by the score of 10-7.

Fast-forward three years and the undefeated Blazers were winners of their first 14 games to begin this season. (They’ve since stretched that record to 15-1 with a walk-off victory in the second game of a doubleheader on March 16th to split with Messiah.) It’s happened more quickly than most would expect, but when outstanding coaches bring in the right players, good things happen.

Mike Landis was hired to be Hood’s Assistant Head Coach and Director of Recruiting back in 2014. Then-Head Coach Cory Beddick brought Mike on board to help build a program where players would find success on the field and in the classroom, while preparing them for a productive future. Mike and Cory set out to find talented players who would form the type of culture that they wanted for their program.

“Cory held everything together,” Landis said. “He paid attention to make-up and character a lot. He would decide not to recruit guys who he didn’t think were the type of people we wanted on campus. He deserves credit – he did a great job with that.”

At the time that Mike and Cory were building the Hood program from scratch, Landis worked as an instructor at several Baseball Factory events while also coaching his own summer team, the Maryland Bayhawks. Through his time in the cages at the Factory, on the field at Baseball Factory events in Pirate City and Vero Beach, and on the field with the Bayhawks, Mike encountered many talented players and connected with many knowledgeable coaches.

The Baseball Factory events and networking led to the recruitment of many student-athletes and Mike estimates that about 60% of the current Hood roster came from those Baseball Factory and Bayhawks connections.

Gall’s incredible freshman season (.435 average, 16 doubles, three triples, five home runs, 55 RBI) earned him All-American recognition, but it did more. It helped Hood to an impressive 14 victories in their inaugural season, and it gave the program instant credibility.

“Better players sell the program to other quality players,” Landis points out. “They attract good players who they know and have played with.”

This was a team moving in the right direction, and it was a place that a freshman could come in and make a huge impact. The addition of Factory alum Brooks Warrenfelltz (Baseball Factory College PREP Program) was another cornerstone of the program. Add in players like starting shortstop Jordan Patterson, third baseman Wayne Baldwin (Baseball Factory Pirate City World Series/PREP Program/Factory Instruction) and second baseman Nathan Kessler (Baseball Factory Exclusive College Recruiting Program/Pirate City WS/PREP Program ), all with Factory connections, and the first two recruiting classes that Beddick and Landis put together are proving to be difference makers.

It didn’t stop at recruiting, as player development has also been integral to Hood’s success. These players have gotten better during their time on campus.

Landis shared many of the Baseball Factory philosophies on training and development, which is a large part of why he is now full time with the Factory as its Director of Regional and Specialized Training. During those first couple years at Hood, he combined his own ideas for building players with some ideas he picked up working Factory events and talking with other Baseball Factory instructors.

From teaching the defensive stakes to position his players in the field, to having Baseball Factory Hitting Coordinator Talmadge Nunnari look at a hitter’s video and offer suggestions, Mike has mixed in ‘The Factory Way’ to add to the development program he has used for years with great success.

With Mike at Baseball Factory full-time now, he is limited in the time he gets to spend with his players at Hood. Coach Beddick has moved on as well. He is now the Head Coach at Washington College.

The Hood baseball program is now in the hands of Michael Impellittiere. The high-energy first-year coach took over this season after spending the last two as an assistant under Beddick. He inherits a group of seniors – that inaugural recruiting class – who are now legitimate leaders on and off the field, and he’s getting the most out of them.

It seems like forever ago that Beddick and Landis put up flyers around the Hood campus announcing the formation of a baseball team and asking anyone interested to attend an informational meeting. Seven people attended that meeting. One player and two managers came out of it, so it was somewhat successful. But even with the energy, knowledge and positive attitudes of Landis and Beddick, it’s hard to imagine that they left that meeting envisioning that four short years later the program they built from scratch would begin the season 14-0.