At one point in time, Hayden Hurst’s baseball stock was growing rapidly, a star on the rise. The Jacksonville, FL native was an imposing figure on the mound at Bolles. At 6’5″, 235, he baffled and dominated hitters with his premier stuff, including a mid 90s fastball that he fired with ease. 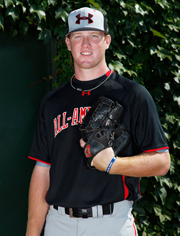 Hurst at the 2011 Under Armour All-America Game

It came naturally. Hurst was always one of the best athletes in anything he did. He was selected for the 2011 Under Armour All-America Game at Wrigley Field; surely he would see this mound again one day. The memories still flood back.

“My experience with Baseball Factory in the Under Armour game was amazing. Getting to pitch at Wrigley Field is a memory I’ll cherish for a lifetime,” said Hurst. “It is still a time and story I share to this day.”

Part of a dominant high school squad at Bolles, he was a two-time state champion, graduating in 2012 just as he had the Florida State Seminoles knocking on his door to commit to baseball. Despite the expectations of going early in the draft, Hayden dropped to the 17th round, due to miscommunication about where he thought he was going – and ultimately where he ended up being drafted by the Pittsburgh Pirates.

“I fell off to the later rounds… so to sit by my TV and wait for hours to not hear my name called was tough.”

The fall he signed, Hurst did not see in-game action, instead, getting bullpens in with the eye on the following spring. During the instructional league, Hurst’s throws became wildly erratic and it was here that he first started noticing the anxiousness every time he threw a baseball.

Putting what he thought was a small bump in the road behind him, Hurst was excited to kick off his first season in pro ball in the spring of 2013, firing his mid 90s fastball with ease, but then, something happened. Inexplicably, Hurst’s mechanics began to get out of whack, his control faltering, getting much wilder than he had even previously been. He was shaking, nervous, unsure of what was happening.

“Every time I stepped on a mound, I got super anxious and my throws went all over the place,” Hurst said.

It all unraveled for good on the mound against the Baltimore Orioles Gulf Coast League team, where in his only appearance, Hurst walked all five batters he faced, threw two wild pitches and recorded only one out. It was his last time ever on the mound.

Following the outing and for the remainder of the season, then pitching coach and former ML pitcher, Scott Elarton worked with Hurst on adjustments, thinking he could right the ship. After all, this was a guy who dominated at every level he played to that point.

Both men tried and tried to figure out and get to the heart of what was going on with Hayden. Nothing worked.

“We really tried everything from throwing to the batters’ eye in the outfield to throwing at the foul pole,” Hurst said. “I would wake up two hours before everyone to go out to the fields so it would just be me and Scott and I wouldn’t have to worry about anyone else being out there.”

Players like former St. Louis Cardinals pitcher-turned-outfielder, Rick Ankiel went through it. To a different extent, former Minnesota Twins and New York Yankees second baseman, Chuck Knoblauch, at one point, nearly ten years into his career in 2000, could not make a throw to first base. Mentally, it becomes a debilitating process, consuming your entire game and one that ends careers very quickly. Because of what Hurst was going through mentally, he never rebounded and struggled with the yips for three years afterwards.

Hurst didn’t give up on his dream of playing professional baseball that easy. He gave it a go as a position player with the Pirates GCL Rookie Team in 2013 and 2014, but was short-lived and admittedly, was tired of it. He’s left all of it in the rearview mirror.

“There is not a second of my current day to day life that I sit and think about baseball. I left all that in Bradenton, Florida,” Hurst said.

Gifted athletes who are blessed with a skill set, usually find ways to channel that into something, so, after the end of the 2014 baseball season, Hurst, who played on the gridiron as well at Bolles, turned to football to fuel his competitive spirit.

After a conversation with his friend, Perry Orth, (at the time, a member of South Carolina’s football team) he soon had thoughts of making it as a walk-on, playing on a team that he grew up watching as a fan.

He took that leap of faith, wasn’t handed anything and made the team as a walk-on, catching eight passes in his freshman season. Hurst worked as hard as possible while in Columbia, SC.

“I lived in that weight room because I knew I had to catch up to some of the SEC-caliber players,” Hurst said. “It was my goal to get on the field that first season and I did. Then when Coach (Will) Muschamp and his staff came in, I took it to a whole new level. I would lift everyday twice a day. I just got addicted to the grind and I worked myself into the position I am today.”

He was named one of four team captains in his sophomore season, setting South Carolina’s single-season record in catches (48) and yards (616). Fast forward to 2017 after a terrific junior season where he was recognized as one of the nation’s top tight ends, Hurst was named First Team All-SEC, catching 44 passes for 559 yards. Given that second chance, he’s in position to be a top selection in this year’s NFL Draft. This time, he takes nothing for granted.

“I pride myself on being extremely humble because I have been on both sides of this thing. I have been to the bottom and know what it’s like when no one knows your name and now I am talked about with some relevance to my name,” Hurst said.

Hurst declared for the 2018 NFL Draft on December 7th, but still had one more college game to play in. The Gamecocks were set to face the Michigan Wolverines in the Outback Bowl. Despite making his intentions known, Hurst, the team captain, played in the game, catching three balls for 41 yards in South Carolina’s 26-19 victory.

Hurst had a few goals when he stepped foot on South Carolina’s campus and one by one, he’s knocked them all out. All but one.

“The first goal was getting on the field and producing. To be a starter, I checked that box. Then to become All-SEC and recognized at the top of my position and I feel that I have done that. And the final one is to be a first rounder, and we will find out on the 26th,” Hurst said.

Hayden has stated he will not attend the NFL Draft, opting instead to be with his family whenever his named is called on draft day. This time around, Hurst is much more optimistic of what is to come.

“I want to be in the comfort of my home with my family to share this experience with, and I feel that the result will be better this time around.”

As the 2018 NFL Draft approaches, Hurst plans to stay as even-keeled and humbled as possible and shares some good advice with athletes who may face hardship in the future.

“That’s the type of person and player I gravitate towards. A guy who is going to be recognized by his actions and hard work, not his voice. Everyone has their own opinions, but my advice would be let your work ethic and on-field play do the talking for you.”