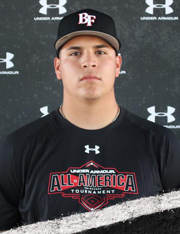 When Jonathon Arrieta steps on the field at the Chicago Cubs minor league facility in Mesa, Arizona in mid-January, it will mark the third consecutive year the slugger from El Paso, TX will take part in the Under Armour All-America Pre-Season Tournament, a showcase for the country’s elite players in an elite tournament setting.

Arrieta is a 2016 graduate for Montwood High School in El Paso and attended an Under Armour Baseball Factory National Tryout in 2013 as a freshman as his skills and size grew in stature.

Offensively during the ’14 and ’15 Pre-Season tournaments, the ball exploded off his bat to all fields. In October of this year, he registered a 96 mph exit velocity – taking absolute hacks and coming to the plate with a purpose.

Scouts have seen the continual progress of Arrieta’s advancement, skills that translate well playing against top competition from around the country. His game has become very fun to watch. It’s those skills that will play well at the next level for the 6’3″, 235 pound infielder.

“Over the two plus years we have known Jonathon, he has gradually improved in every tool category culminating in his latest performance with us in October where he threw the ball 91 mph and hit a ball 450 feet,” says Player Development Coordinator for Baseball Factory, Patrick Wuebben. “I would like to shake his hand out of respect for his efforts, but I’m afraid he may tear my arm off considering he is also rated as having the highest grip strength out of any player we have seen this year.”

Those type of accolades have helped grow his Baseball Factory experience but also in regards to the next step of his journey.

Arrieta, who plans to study Engineering as his choice of major has committed to play at Howard College, a junior college in Big Spring, TX that won the 2009 JUCO World Series with an astounding 63-1 regular season record.

We congratulate Jonathon for becoming a three-time Pre-Season All-American and wish him success at the collegiate level and beyond.