Highlighted below are the Top 10 2021 grads from the many talented athletes we saw at this year’s Under Armour All-America Pre-Season Tournament. The list is a mix of tools, our scouts’ view of the prospect status of the player and performance at the event. Stay tuned for even more information about other 2021 grads from the event.

Check out the best of the best from the Top 10 2021 grads in this highlight video: 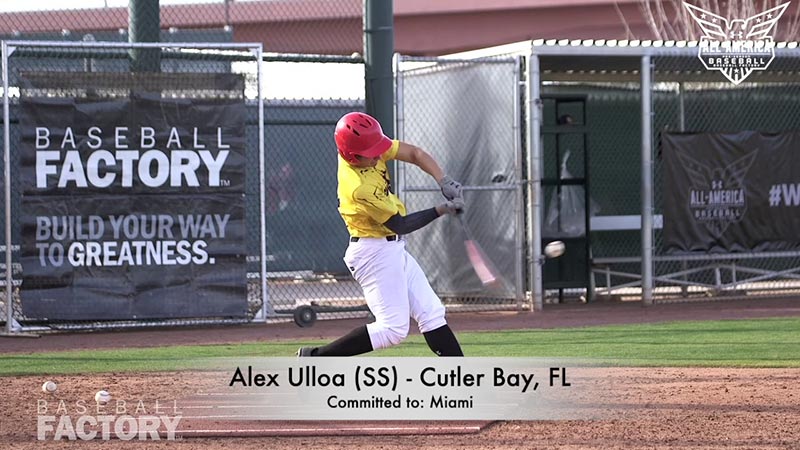 Ulloa did a bit of everything out in Arizona. He posted impressive workout numbers – 96 mph arm strength, 92 mph exit velo, 7.14 in the 60 – and played very well in games. He went 3-for-6 with a double, two RBIs, two stolen bases, played hard and fast and was excellent in the infield. There’s a lot to like with natural rhythm and actions to all he does on the field.

Keegan was dominant during his outing on the mound with nine strikeouts without allowing a hit. He had a clean, quick arm stroke and commanded three quality pitches – a fastball up to 91 mph, a sharp breaking ball and good feel for a change. He also showed well in the outfield and swung the bat well in batting practice.

Everything comes easily and naturally for Dorian on the field. His actions at shortstop are smooth and mature as he uses soft/sure hands, active feet, a quick exchange and a strong, accurate arm to make plays consistently. His left-handed stroke at the plate is balanced and simple allowing him to deliver the barrel and make consistent solid contact.

Bryan can flat-out swing the bat. His right-handed swing has rhythm and timing leading to lots of hard contact and present power (96 mph exit velo). He went 3-for-6 with a double and triple on top of a very loud batting practice session. He also has sure hands at third and plenty of arm (91 mph arm strength) across the diamond.

Brodie has a very high ceiling with an excellent pitcher’s frame and a promising three-pitch mix. He throws from a high slot getting excellent downhill plane to all of his stuff and he lived down in the zone during his outing in Arizona. His fastball was up to 89 mph with some late life and he added a sharp breaking ball and a sinking change. Brodie dominated on the mound registering seven strikeouts without allowing a hit.

Athletic and twitchy, Menelik was one of the top performers at the event. He went 3-for-7 with two doubles, a triple and two RBIs. He pressured the defense with his speed (6.72 in the 60) which also translated to good range in the outfield. He closes well on balls and his offensive profile is a top-of-order type with some pop (93 mph exit velo) – that is always in demand.

Chase is a legitimate two-way prospect with a strong 6’2” frame and some big tools. He is quite a presence on the mound where he ran his fastball up to 88 mph, flashed a curve and slider (both very good offerings) and showed an advanced feel for a changeup. The switch-hitter hit the ball hard from both sides in BP (90 mph exit velo), showed good hands in the infield and a very strong arm across the diamond (94 mph raw arm strength).

Trey is an exciting young prospect with a good mix of tools, game ability and aggressiveness. His swings with intent from the right side, going 2-for-3 with a double in his first game action. Trey’s batting practice was loud with the ball exploding off the bat. He showed center field ability, capable of reading and closing on balls (6.88 60 time) and he threw very well also (91 mph arm strength).

Garrett is a solid all-around player with instincts and feel for the game. He has quick hands at the plate and barrel accuracy. His quick hands caught up to velocity in-game and resulted in a double down the left field line. At shortstop, Garrett showed fluid actions, good feet and excellent hands. His exchange and release were quick and natural and he finished plays with an accurate arm.

A physical young backstop, Ian is a complete catcher who shows excellent catch and throw skills (91 mph arm strength) to go with a potent bat. He was as low as 1.97 on throws to second in the workout and handled pitchers well during the games. Offensively he made loud contact in his BP session and proceeded to go 2-for-5 with a walk in his game at bats.