As teammates on the National Team at the 2011 Under Armour All-America Game, Franmil Reyes and Jesmuel Valentín would have likely never imagined they would make their Major League debuts within weeks of each other. However, early in the 2018 season on April 28th, Valentín made his MLB debut with the Philadelphia Phillies while just fifteen days later on May 14th, Reyes made his debut with the San Diego Padres. Seven years after starting together in the same All-America Game lineup, both Valentín and Reyes look to blossom into young stars at the big league level and dominate in the MLB just as they did in that Under Armour All-America Game. 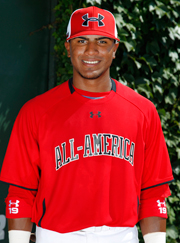 While growing up in Manati, Puerto Rico, Jesmuel Valentín played PONY baseball for the Boys Baseball of Puerto Rico. Another notable alum to play there in Puerto Rico? Minnesota Twins right-hander, Jose Berrios. After playing for the Puerto Rico Baseball Academy, Valentín was taken with the 51st overall pick in the 2012 MLB Draft by the Los Angeles Dodgers.

Prior to being drafted, as mentioned before, Valentín played in the 2011 Baseball Factory Under Armour All-America Game. He would get the start at SS before moving over to 2B later in the game. The switch-hitting Valentín batting second and went 2-for-2 with an RBI, two walks and showed good gap to gap power during BP. His impressive day at the plate was good enough to win him MVP honors on the National side and be considered one of the best “baseball players” during the event.

Throughout his first two and a half seasons with the Dodgers organization, Valentín played Rookie and A Ball before being traded to the Phillies in the middle of August during the 2014 season. He played twelve games after the trade, in which he was assigned to the Clearwater Thrashers (A Advanced), and hit .205 in that span. However, throughout that season with both organizations, Valentín slashed .274/.341/.406 with seven home runs and 59 RBIs. During his 2015 season, he played in only 72 games, but still hit .271 with 30 RBIs and 44 runs scored.

Valentín started the 2016 season in Double A with the Readin Fighting Phils’ and would end it with the Phillies’ Triple-A affiliate Lehigh Valley IronPigs after being promoted. Throughout the entirety of that season, Valentín hit .266 with 11 home runs and batted in 70 runs. Valentín’s 2017 season in Triple-A was cut short due to a shoulder injury but managed to knock in 11 runs on 37 hits.

As the son of a 16-year MLB Vet, Jóse Valentín, Jesmuel wanted nothing more than to follow in his father’s footsteps and play at the Major League level. Like his father, Jesmuel is both a middle infielder and a switch hitter. Valentín collected his first Major League hit on May 7th against the San Francisco Giants. 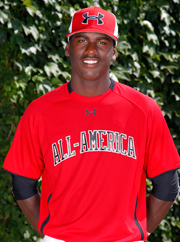 Valentín’s teammate during the 2011 All-America Game, Reyes – Team National’s starting right fielder – hit in the six spot and went 2-for-2, just like Valentín. He showed power in his home run derby qualification, when he hit five of the ten pitches out of the park. Our scouts evaluated Reyes and believed his skill set was best fit for right field, and that is exactly where he is currently playing for the Padres.

In both the Arizona and Northwest leagues, as a fifteen-year-old, Reyes would hit .292 with four homeruns and 34 RBIs. Three years later while playing Advanced A Ball, still as a eighteen year old, he hit .278, knocking in 83 runs and mashing 16 homeruns. During 2017, Reyes had without a doubt his best season in the Minors.

Despite hitting just .253, Franmil Reyes had career highs in home runs and RBIs hitting 26 and driving in 106 respectively.

Reyes was promoted to Triple-A at the beginning of the 2018 season and hit .442 with 14 home runs in just 36 games. This showing was good enough to catch the eye of the major league club, which led him to being called in the middle of May.

In just 55 ABs, Reyes has already hit five five homers, showing tremendous power after he clubbed a 445-foot home run with an exit velocity speed of 115 the other night for San Diego. As a 20-year-old, Reyes is one of the youngest players in the MLB right now, but that is not stopping him from showing the world what he has to offer.