Excited to see @Baby_Jesus9 get his first ML win. Big things ahead for him! Here he is getting loose on the mound at Wrigley Field prior to his dominant 2015 #UAALLAMERICA outing. @BaseballFactory pic.twitter.com/hJs7lBYIO3

Bates College, home of the Bobcats is a nationally recognized residential liberal arts college, located in Lewiston and founded in 1855. Both players highlighted today hail from the state of Maine and both are contributing to their collegiate teams as freshman. 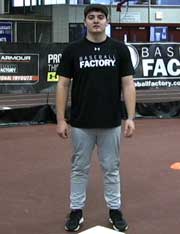 Payton Kennison – Kennison is from Livermore, Maine, 20 miles from Lewiston and is a 2014 graduate from Spruce Mountain High School and played for the Phoenix.

Kennison attended an Under Armour Baseball Factory College PREP event (previously the Premium Video Program) in Lewiston back in December 2012 and also January 2014. In between, Kennison participated in the Omaha National World Series in June 2013, Baseball Factory’s National World Series at Pirate City in August 2013 and the Arizona Fall Classic in October 2013, where he continued to project as a pitcher, showing an outstanding delivery, working quick and free to the plate.

His ability to throw strikes with all of his pitches to both sides of the plate led him to committing to Thomas College in nearby Waterville, ME.

As a freshman this past season for the Terriers, Kennison made nine appearances, five of them being starts, winning two games in 24 2/3 innings pitched. 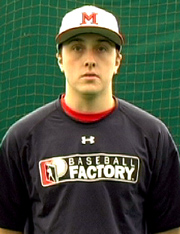 Alec Manning – A 2014 grad from Gould Academy in Bethel, ME, Manning first attended a National Tryout in Lewiston back in December 2012. Two months later, he participated in a College PREP (PVP) event in Rindge, New Hampshire where he showed the ability to block the ball well behind the plate. Scouts noted his ability to catch athletically, meaning his exchange was quick and clean and threw the ball well from a short/loose arm action.

From there, Manning participated in the 2013 Omaha National World Series where he continued to show improvements in his baseball abilities. During the event, Manning threw his best pop time at 2.00 and improved upon his receiving of the baseball and blocking balls in the dirt.

The 6’2″, 200 pound catcher committed to Kenyon College in Gambier, Ohio who went 21-19 this past season in the North Coast Athletic Conference.

Manning received limited action in his freshman season, only getting three at-bats, but scored his first career run against the College of Wooster in April.