Texas has long been known for its production of baseball players, in both the quality of play of high schools and the number of big leaguers developed. Here are two who shined at the Under Armour Baseball Factory National Tryout and Evaluation and have gone on to experience success at the next level.

Drew Gooch, a 2014 grad of Argyle High School in Argyle, TX, is entering his sophomore year as a relief pitcher at Texas Christian University. Gooch, who attended the 2012 National Tryout in Cedar Hill where he clocked an impressive 87 mph fastball, made nine appearances for the Horned Frogs last year, going 1-0 with a 5.87 ERA. He gained a good amount of experience as TCU made their second straight appearance in the College World Series, a first for the school. Going into his sophomore year, Gooch is looking to build upon his freshman campaign, as he hopes to earn the role of a spot starter. 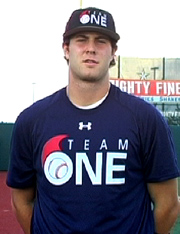 Turner Larkins, a 2014 grad of Arlington Martin High School in Arlington, TX, is coming off of a tremendously successful freshman season at Texas A&M, where he pitched 46.0 innings to a tune of a 4-1 record with a sterling 3.52 ERA. Larkins, a Team One Futures Series Texas participant in November 2012 threw a fastball that day between 88 and 91 mph and showed good bite to his breaking ball. He’s been a tremendous asset so far for the Aggies, starting 12 games last season, and he’ll look to solidify the rotation of a team expected to compete for an SEC championship in 2016.

These two collegiate standouts are reaching their full athletic potential and got themselves to the next level. You can be next! Start your journey by attending an Under Armour Baseball Factory National Tryout and see how you stack up against the best from around the country. To find a tryout near you please visit our tryout page to register and receive more information.