The Under Armour Baseball Factory National Tryout Tour rolls into Trenton, New Jersey on Tuesday, August 11th at Arm & Hammer Park, formerly known as Mercer County Waterfront Park in Trenton. The ballpark is home to the Trenton Thunder, the Double-A affiliate of the New York Yankees in the Eastern League.

In June 2014, the stadium hosted the first ever Gold and Bronze medal games in baseball for the Special Olympics USA National Games.

Let’s take a look at some recent Baseball Factory players who have come to a tryout in the state of New Jersey or who have stayed locally to play in college.

Luke Bonfield – Bonfield calls Skillman, New Jersey home and is a 2014 graduate from Immaculata High School in Skillman where he played from 2011-2013, garnering second team All-Area honors from the Courier News and a first-team All-Somerset county selection in 2013. In his senior season, he attended IMG Academy in Florida where he hit .379 with three home runs and 19 RBI in 27 games.

Bonfield was drafted by the New York Mets in the 2014 draft, but opted to instead join the Arkansas Razorbacks baseball team this season, playing in 28 games and recording his first collegiate hit in the season-opener against North Dakota. He recorded a hit and scored a run in his lone at-bat in the NCAA Fayetteville Super Regional against Missouri State. 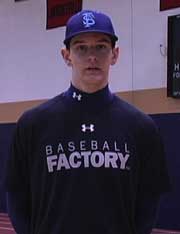 Zach Warren – Zach is a 2014 graduate from St. Augustine Prep in Vineland, New Jersey and committed to the University of Tennessee where he finished his freshman season with the Vols.

He appeared in eight games for Tennessee, going 2-0 with a 5.09 ERA and 16 strikeouts in 23.0 innings pitched, his big highlight coming on March 17th when he recorded his first collegiate win, throwing five scoreless innings, striking out five Austin Peay hitters in a 3-0 victory.

Warren got his Baseball Factory start by attending a video program in Hightstown, NJ back in March of 2013. 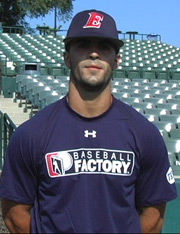 While at Bloomfield, Carter was a four-year varsity starter and a two-time captain at Bloomfield. He’s the school’s all-time leader in hits (152), runs (116) and batting average (.411), capping off his stellar high school career with the Essex County Player of the Year award as a senior.

The dynamic Carter committed to Rutgers University and put together a fine freshman season for the Scarlet Knights, hitting .318 with 10 doubles, three triples, 34 RBI and 35 runs scored in 54 games. This season, the sophomore scored 19 runs, with seven extra-base hits with 19 RBI in 44 games, batting lead off in 30 of those games. Carter was named an Academic All-Big Ten selection this May.

Frank D’Agostino – D’Agostino graduated from Monroe Township High School in Monroe, NJ in 2012 as the school’s all-time leader in home runs hit and was a three-time All-Area and All-County selection.

He played at Temple University in 2013 and 2014 before the University ended the baseball program after 87 years after being faced with budget cuts. D’Agostino started 43 games in 2014 for the Owls, scoring 16 runs with six doubles, two triples, two homers and 18 RBI.

Beginning with an Under Armour Baseball Factory National Tryout in Hightstown back in March of 2009, D’Agostino then participated in the Premium Video Program before being selected to the Team One Northeast showcase in July 2011 and an Under Armour Pre-Season All-America Tournament appearance in 2012 where he showed skills that translated to the next level – good skills in the field and at the plate too where he showed nice power to all fields.