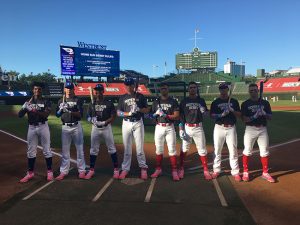 Before the Under Armour All-America Game, eight players participated in the B45 Home Run Derby. Each player got two minutes to hit as many home runs as they could. Four players were chosen from the National Team and four were chosen from the American Team. The player who hits the most home runs for each team will move onto the finals to compete for the crown.

.@nander25DS over nuveen sign and onto Waveland early in round. Finished with 9

.@groshansj10 lined one off BF banner in LF seats for first. Got on late run in last 30 seconds to finish with 5 HR

.@HindsRece just under scoreboard for longest HR to LCF so far. Finished with 4

.@will_banfield out onto Waveland Ave twice. Finished with 5 HR #UAALLAMERICA

.@elijahcabell30 deep to LCF off UA sign in bleachers. Several blistered low and hard off LF bleachers. Onto Waveland for 6th HR

.@NolanGorman dead central EZ for second HR after liner out to RCF to get on board. Off fence above RF bleachers and nearly onto Sheffield.

.@JKelenic_1019 off the scorecard in RF about halfway up. Finished with 4 HR

Nolan Gorman and Elijah Cabell have a swing off after tie of 6 HR in order to meet Nander De Sedas in the finals, Gorman advances.

30 second swing off for spot in finals. @elijahcabell30 came up empty. @NolanGorman off scoreboard in RF to advance and oppose @nander25DS 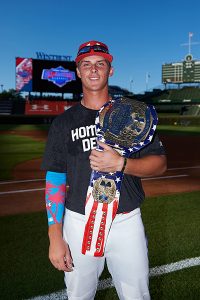 Gorman wins the HR Derby and sports the championship belt.

#UAALLAMERICA HR derby finals. @nander25DS out onto Waveland down LF line to post 5. @NolanGorman late rally to post 6 w/ shot off RF board