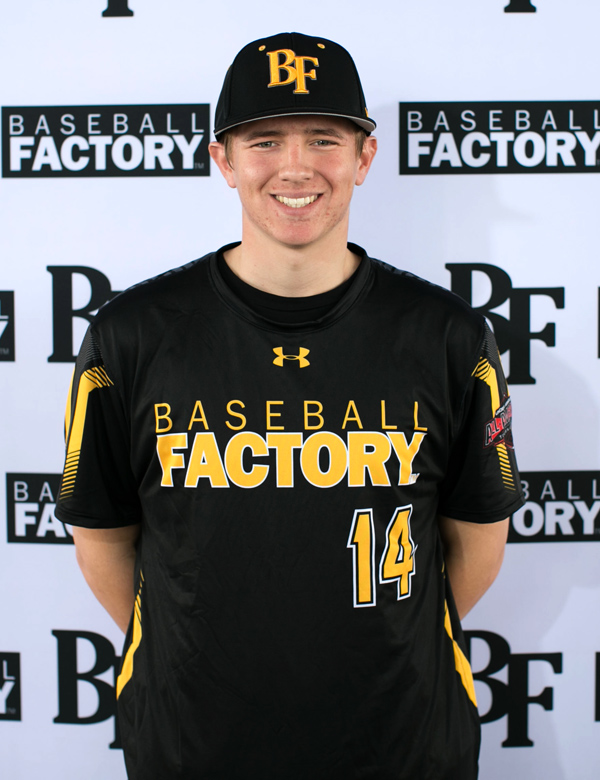 Ready to make an impact at the Division I level, 2017 Under Armour Pre-Season All-American, Clayton Westrope recently signed his letter of intent to play at San Jose State University.

The LHP/1B heads into his senior season at Livermore High School in his hometown of Livermore, California as one of 13 players signed by the Spartans for the 2017 recruiting class as the team looked to add some great depth to their pitching staff.

In addition to being excited to work with his new coaches and get on the field at San Jose State, Clayton is focused on his academics, pursuing a degree in Law Enforcement.

“I really connected with the coaches on my visit and the college had the classes I need for my profession that I want to go forward with,” Clayton said.

Westrope first attended an Under Armour Baseball Factory National Tryout in Union City, California back in April of 2015 and performed well enough to be selected for the Under Armour Southwest 16U Championships, held at the University of La Verne in July of 2015. Clayton performed very well against other top competition, throwing two effective outings, with a fastball at the time sitting in the upper-70s.

A big thanks to everyone who came out and supported me today signing on at San Jose State University! #spartanup @SJSUBaseball pic.twitter.com/EGEqtyhbJK

His performance at the event put him on track to be invited to the 2016 Under Armour All-America Pre-Season Tournament, but family issues prevented him from attending. All in all, it was a minor setback for the lefty, as he attended a College PREP event last April in Kentfield, California to get back on track, showing a five mile per hour uptick on his fastball and quality off-speed stuff to show as quality pitches at the next level.

Last summer was crucial for Clayton’s development as he got his video out there to prospective schools and coaches. Clay Westrope, Clayton’s father, talked about how the timing fell in place for Clayton to be where he is today.

“He had a great summer with you guys (Baseball Factory) in 2016 and coaches came out to see him at the Team One event in Azusa (California), so between that great experience and watching the rest come together since, it’s been pretty cool to watch.”

When the call came again from the Factory wanting to invite Clayton to this year’s Pre-Season event after a strong summer performance at Baseball Factory’s National West Showcase last June, the Westrope’s were very happy to hear familiar voices on the other end of the line.

“When we got the call again for this year’s event, we were ecstatic,” Clay said. “All of Clayton’s hard work, especially the last couple years, the committing to San Jose State, it all came together at the right time and we couldn’t have been happier for him to receive the chance again.”

Clayton was beside himself when the news broke with the second chance at major opportunity.

“It was hard to believe and quite an accomplishment for me,” Clayton said. “I was just thinking who would be there, what team was I going to play on and how I would do.”

Going into the event, Clayton’s goals were to keep his arm in shape for the upcoming summer and work on his pitches while in Mesa. He shined for Team West during the Under Armour All-America Pre-Season Tournament held earlier this month, putting together a dominant performance on the mound, allowing one hit, one walk and striking out nine of fifteen hitters in his day of work.

“I had another great experience at a Baseball Factory event,” Clayton said. “The All-America Pre-Season Tournament in Arizona was a great experience meeting players and playing against some of the best players from all over the United States. I thought my overall performance pitching was very good. I was hitting all my spots with all of my pitches.”

Over the last two and a half years, Clayton’s skills have blossomed. In addition to his performances on the field at Baseball Factory events, it was the follow through and care that Factory coaches and staff have shown throughout the process that both Joanna – Clayton’s mom – and Clay say separates the organization from others.

“From everyone in the office to the coaches, to how they keep parents involved, how they keep the kids engaged and invested, it’s a good feeling to have,” Joanna said.

“Bar none, Baseball Factory is top notch as far as responding to emails, keeping you informed of what’s going on.. you’re sometimes informed three times before an event even happens,” Clay said. “We’ve done a few other type events and this by far is the best. It’s top notch.”

Once Clayton’s personal player page was set up, including video from two events he participated in, the invites to college camps began to roll in. After committing to San Jose State, other parents of the players on Clayton’s team began asking what needed to be done they so their son could get noticed too.

“We just thought so much of Clayton being fortunate enough to be invited to two Pre-Season Tournaments and playing in a Team One event, that we wanted to tell everyone about the Baseball Factory standing out from other programs,” said Clay. “Between the communication with coaches and staff and the player page, to the overall great exposure and top notch gear, “I tell ’em, Baseball Factory is what we did and it’s been a great experience for us.”