Alex Speas started the 2015 Under Armour All-America Game for the American Team, and reached as high as 96 mph with his fastball. After allowing some early base runners, he pitched his way out of trouble via a 1-6-3 double play to end the first inning. 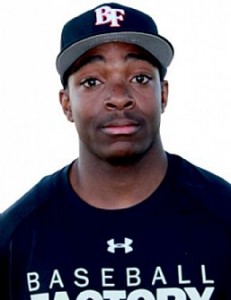 PREVIOUS SCOUTING REPORTS:
We first saw Speas in Fall 2014 at the Under Armour Futures South Showcase, where he touched 93 on a very cold day:

Speas has a long, slender frame at 6-foot-3 and 185 pounds. He sat 90-91 and touched 93 with his fastball. He featured an electric arm and FB exit – pitch had plane and jumped on hitters. He had control of the pitch, but not necessarily command. Has arm speed and looseness in hand/wrist allowed him to spin his breaking ball very well. It had good shape in 74-75 mph range – could see exploding depth if he wanted to really drive it. Showed good feel for his changeup along with ability to maintain arm speed and looseness in wrist for natural release – only saw a couple at 80-82 mph. Delivery was athletic and coordinated, allowing for consistent release point with fastball and secondary stuff. Overall, a special talent with potential front of the rotation type stuff.

We saw him again a few months later at the 2015 Under Armour Pre-Season All-America Tournament:

Alex Speas didn’t face any hitters in Mesa, as he hadn’t progressed far enough through his off-season throwing program to take the mound live. He did draw a crowd for a bullpen session however, and during that time he showed why he was among the first thirteen players selected to the 2015 Under Armour All-America Game.

He stands a slender and long-limbed 6-foot-3 and 185 pounds, and features an electric arm – almost to the point where it looks like he’s throwing a different ball than everyone else.He works from a high three-quarters arm angle, which allows him to use his length to generate good downward angle on his pitches. His fastball jumps from his hand, and he uses the looseness and quickness in his hand and wrist to spin a tight breaking ball.

On a cold November day at the Under Armour Futures South Showcase, he sat 90-91 and topped at 93. We didn’t have a radar gun up during his bullpen session in Mesa, but early reports from the Atlanta area have him up to 95 as of mid-February.