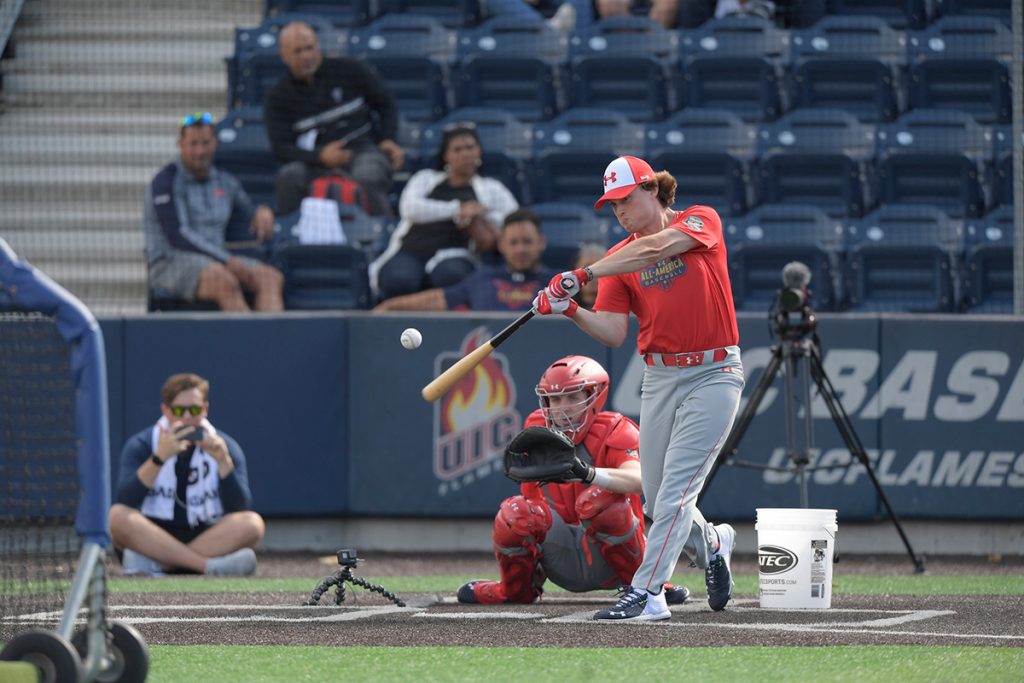 Blaze Jordan during the Home Run Derby prelims at UIC

After a great workout in front of scouts from different teams across Major League Baseball at the University of Illinois at Chicago, the preliminary round of the Under Armour All-America Game Home Run Derby, powered by B45, concluded with eight athletes moving on to the finals at Wrigley Field.

Positional players from both teams participated in prelims, with four total coming from each side (top two and two coaches pick) for the combined total of eight in the finals.

It was an exciting ending to the finals as Austin Hendrick from the National squad edged out Daniel Susac (American) in a swing off (2 to 1) to claim the 2019 Under Armour All-American Home Run Derby Championship.

Austin Hendrick (@Aust_Hendrick7) wins it with a blast and a bat flip for the ages! These kids are having fun here. @BaseballFactory #UAALLAMERICA pic.twitter.com/7Y3de8Jzi1

.@Blaze_j24 started slow and ended up with 5 HR including this one out onto Waveland #UAALLAMERICA pic.twitter.com/tjK7BJCbeT

Daniel Susac (6) Susac ended his semi-final round with six homers, including a bomb into the left-center bleachers.

Nolan McLean (5) – one of McLean’s shots went over the scoreboard and onto Waveland Avenue.

.@nolanmclean11 went over everything and onto Waveland Ave into a stiff wind for his first HR. Ended up with (5)#UAALLAMERICA pic.twitter.com/QUiRfrdq5N

.@JBulger33 wasted no time getting started in his HR derby round. This was right out of the chute. Ended up with 6. #UAALLAMERICA pic.twitter.com/BfJZNfyJ5a

Zac Veen (7) – Veen hit absolute bombs from the left side, including a shot that went over the concourse for his second bomb and later off the scoreboard, finishing with seven.

.@veen_zac went up on top of the concourse for his second bomb and later off scoreboard. Ended with 7. #UAALLAMERICA pic.twitter.com/kmAfTlNiwF

That dude in the blue better lookout. @Aust_Hendrick7 dropping bombs way up the bleachers. One later in round went over RF scoreboard. Finished with 7 for clubhouse lead #UAALLAMERICA pic.twitter.com/tASABfJO5d

Blake Shapen (5) – ended up with five homers in the semi-final round, including two back to back bombs.

.@BShapen ended up with 5 HR in semi final round, including these two back to back #UAALLAMERICA pic.twitter.com/qxQ5sUavdI