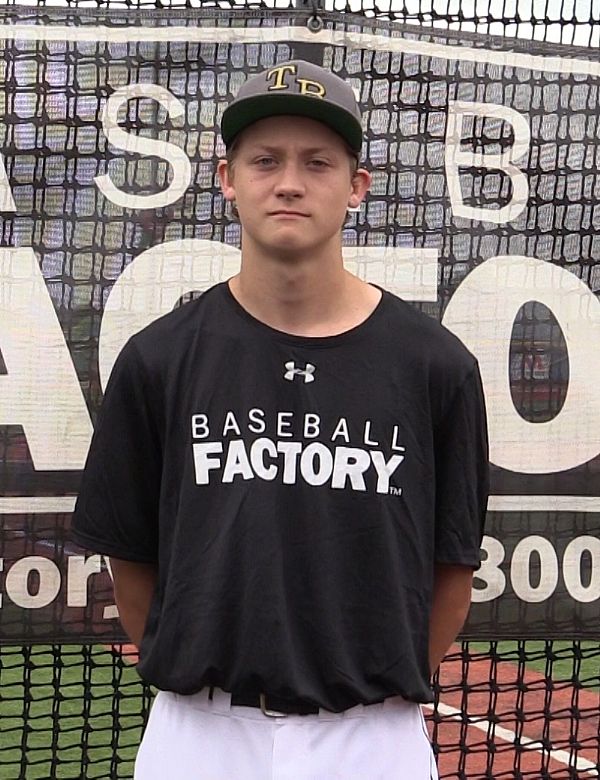 Tyler during his time at a College PREP event

The path to collegiate baseball has been lined with highs and lows for Baseball Factory athlete, Tyler Ingram. The low for Tyler and his family was especially tough, as his father, Corey, developed a deadly liver condition in the summer of 2017 that nearly took his life.

Athletes experience challenging lows before things improve, but it’s how Ingram pushed through trying times, making it all the more rewarding for the 2019 grad, as he recently committed to play for Division III Trine University in Angola, Indiana.

Since joining the Factory in early 2017, Tyler has been an athlete who embodies the Factory Way. Overcoming odds, scratching and clawing their way to their dream. It all began at his first event, a Baseball Factory College PREP event at the University of Indianapolis in March of 2017.

“I was a sophomore in high school and nervous when I got there, because I really didn’t know what to expect,” Tyler said. “I got over my nerves pretty quickly when I saw how many other kids that were there who were just like me.”

Tyler quickly warmed up and enjoyed Baseball Factory’s coaching staff as they showed a genuine interest in wanting to help Tyler grow as an athlete. Shortly after, he came into contact with Player Development Coordinator, Corson Fidler for the first time.

“He called and went over my evaluation and explained other opportunities I had qualified for. Ever since that first phone call, Corson has been a huge support system for me,” Tyler said. “He is always there to answer my questions, give me advice, or just listen to me vent.” 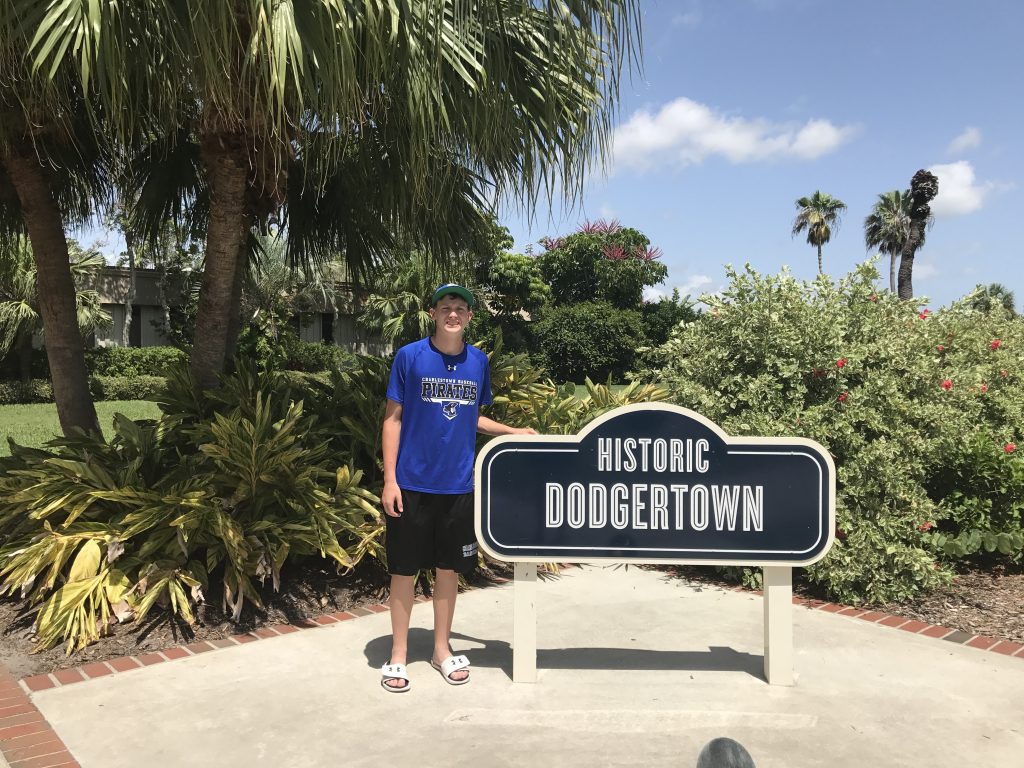 “He is all about the grind and is a gritty kid,” Fidler said. “He took the time to understand the process, didn’t shy away from the hard work needed on and off the field and had his priorities in order with his academics first and baseball a close second.”

Corey noted that both Corson and the Factory showed an immediate and genuine interest in Tyler.

“I will be forever grateful and proudly wear my Under Armour gear while telling everyone with kids coming through the system about Baseball Factory,” Corey said. “I’m a firm believer of you only get out what you put in. Baseball Factory goes all in and if your child does the same, good things happen.”

With an action plan in place and an invitation to Baseball Factory’s Pro Select Training in Historic Dodgertown later that summer, Tyler began to prepare. In early April, however, a visit by Corey to the doctor led the family to unexpected news.

Corey began having liver issues and by July, was hospitalized with a prognosis of six months to a year to live if a liver transplant was not available. For Tyler, who shares special bonds with his Dad through the game of baseball and mom, Brandi in day to day life, blocked out the negatives and focused on the positives.

“To be a good athlete, you have to possess the ability, determination and mental fortitude to succeed,” Tyler said. “I used all of the negative and scary situations to grow stronger as an athlete and as a person. Not only was it my dream to play ball in college, but it was also his dream to watch me play and I went out on the field every time determined not to let him down. Before every game, I would say to myself, ‘This might be the last time he ever sees me play ball so I’m going to play my best.’ Eventually, that became a mantra to help me get through any difficulty situation.” 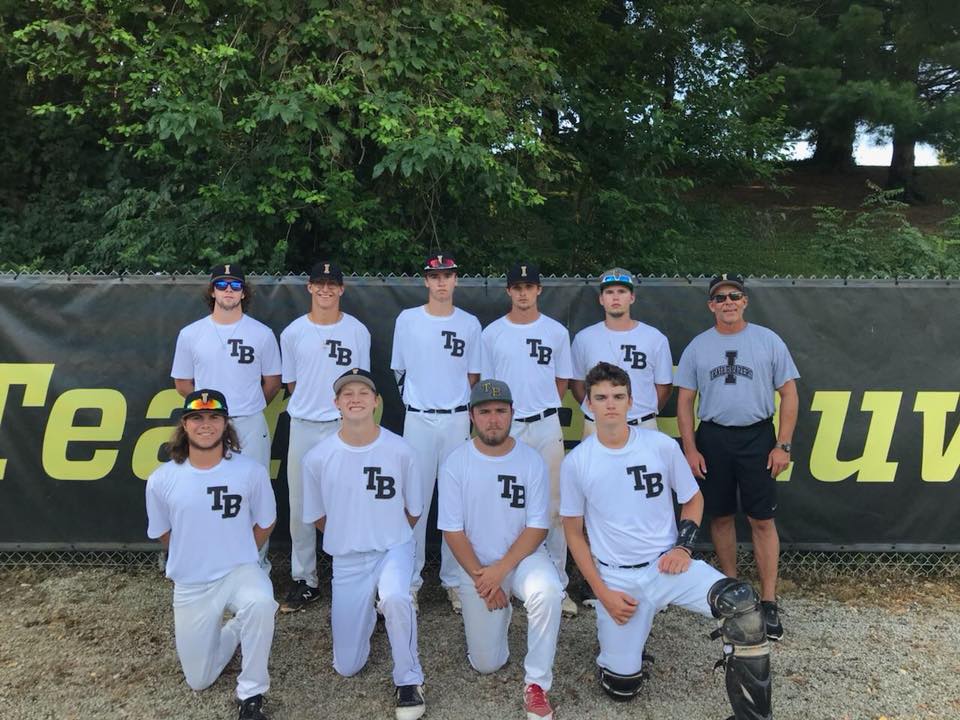 His talent led him to be selected for the Under Armour Recruiting Classic last December in Arizona. Balancing baseball with life was proving difficult, and the family nearly declined the invite, as Corey’s treatments began to ramp up. Looking to help in any way possible, the Factory Foundation, charitable arm of Factory Athletics, worked to get Tyler and the Ingram’s what they needed to make sure he was on the field.

Tyler thrived in Arizona, rejuvenated by playing the sport he loved. Using drills and recommendations on improvements he could make immediately to his game from Corson, Tyler followed a long toss program that helped increase – by his estimates – his throwing velocity by nearly 10 miles per hour and bat speed by six.

The improvement that summer got the attention of coaches Troy Whittington and Josh Goldspiel with the Indiana Trailblazers, a summer team in Bloomington, Indiana, who both saw Ingram’s Baseball Factory videos and knew he would be a big part of the program. Both were supportive and instrumental in Tyler’s development.

“I ended up getting to play primarily for Coach Troy on the 18u team and Coach Goldspiel on the 17u team on my off weekends,” Tyler mentions. “Both of those coaches were awesome to work with and they made every game and tournament a blast. They are two of my biggest supporters and I will always be grateful to them and the Trailblazers organization.”

Tyler and his parents turned their attention to the college recruiting process as he began to build his college list. Having a Baseball Factory player web page with his numbers, scouting report and video from his previous College PREP events and the Recruiting Classic, Tyler began the search for his school.

Trine University came calling, but initially reached out to Tyler for bowling. After the call from the bowling coach, Tyler took it upon himself to research Trine and decided to email the link of his player page to the baseball coaches.

“(Assistant coach) Coach Pfafman contacted me almost immediately,” Tyler said. “He was impressed with my videos and really wanted me to visit the school so they could meet me in person. Right off the bat, I could tell they were very interested in me athletically, but they also made sure I got a VIP tour of the school and what it had to offer academically.”

Planning to study psychology, he met the head of the department and clicked immediately. Pleased with the state of campus, noting the state-of-the-art facilities: the dorms, classrooms and library, to the baseball field and athletic facilities, it was an easy decision.

“Everyone I met on and off campus was so friendly and welcoming. What really solidified my decision was the fact that the more time I spent there, the easier I could see myself becoming part of that campus community.” 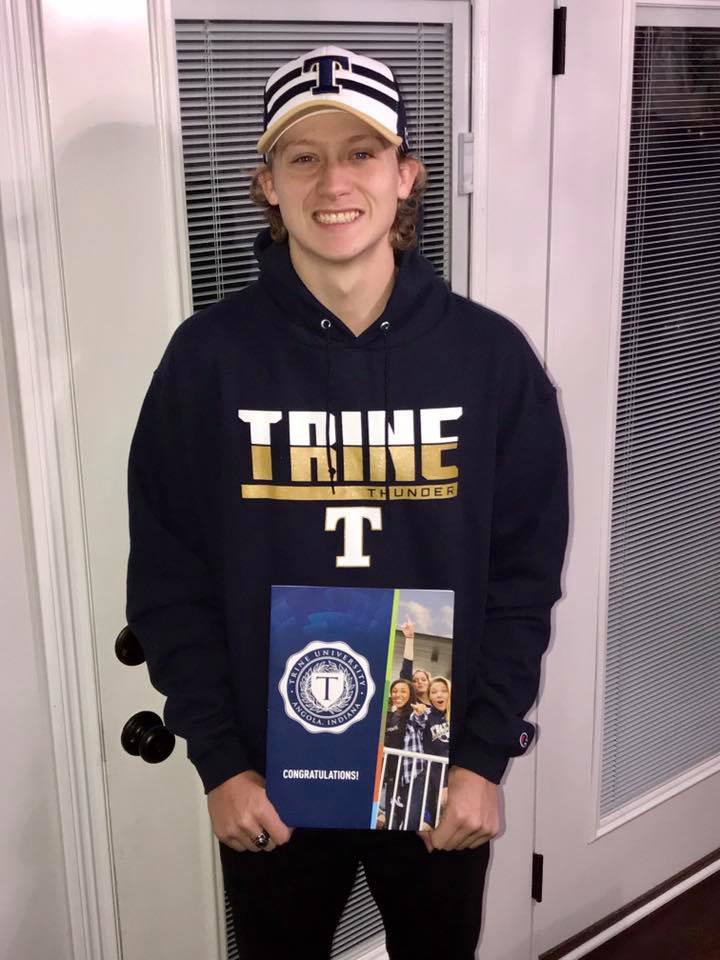 Ingram, after committing to play at Trine University.

Neither Brandi nor Corey played collegiate sports, so the process of getting Tyler started on his journey was a brand new and often eye-opening experience, one made much easier once the family met head coach Greg Perschke. This proved instrumental in Tyler’s recruitment as the video from the Recruiting Classic gave the coaching staff all they needed.

“I went with Tyler on all of his college visits and each time he met with one of the coaches, they were extremely impressed with how professional his page was,” Brandi said. “When he was being interviewed at Trine, Coach Perschke, specifically asked about his Baseball Factory page, how the program worked, and commented on what a great tool it was to have.”

The video helped to show Tyler’s strengths, easily translating how Tyler could fit into the plans at Trine. It just happened to be the first time they were seeing Tyler’s play.

“They were so impressed with how well he played on his videos, especially in his live game pitching video from Arizona, that they knew they wanted him on their team,” Brandi said.

The true, meaningful connection and level of comfort the Ingram family felt with Fidler, far surpasses anything that happened on the field.

“Corson was a godsend for Tyler,” Corey said. “He was one of the best things that could have happened to Tyler at such a critical stage in his athletic development. He was always there to listen and advise Tyler through the process and made sure that he always gave honest feedback. Beyond that, he cared about not just baseball, but Tyler’s grades and life.”

Corson noted how so many odds were stacked against Tyler, but one by one, he fought on.

“Tyler is very strong mentally,” Fidler said. “For a lot of kids, it would be a distraction knowing your Dad was dying and would need a big-time operation and organ donation to make it through. He stayed focused mentally when surrounded by many things that were negative and could have dragged him down, he compartmentalized, and worked hard to make his dream a reality.”

Focusing on the field isn’t easy, but it’s even harder to keep focus in the classroom. Despite all the hardships, Tyler continues to thrive and keep focused.

“We are really lucky as parents, because Tyler has always been one of those kids that strives to be the best both in the classroom and on the field,” Brandi said. “He’s worked hard his entire life and always knew that his grades would get him scholarships even if baseball didn’t.”

Brandi noted the importance of academics, discussed by Factory coaches during the events Tyler attended.

“I remember hearing one of the Baseball Factory coaches say, ‘It doesn’t matter how great of an athlete you are if you can’t keep your grades up because by the time the Spring Season starts, you won’t be eligible to play.’ Baseball Factory doesn’t just fill kids heads with the illusion that every one of them can go to college on a full baseball scholarship. They give the real stats and start helping them prepare for how hard they are going to have to work if they want to play ball in college.”

“Tyler has always been mature and responsible, but just like other teenagers, he was at risk of getting ‘Senioritis‘,” Corey said. “Corson and Baseball Factory helped keep him accountable and reminded him to keep working hard.”

Corey’s health continues to improve as the normalcy slowly returns for Tyler.

“My parents did their best to maintain normalcy through it all even though I knew that they were just as scared as I was,” Tyler said. “No matter how bad things got, how stressed out they were, or how bad dad felt, they still managed to give me their full support and wouldn’t let me give up on my dreams to play ball in college. I am even closer with my parents than I was before he got sick and I didn’t even think that was possible.”

If it weren’t for that day in March of 2017 when Corey took the chance, driving Tyler nearly 100 miles from their home in Henryville, IN to the University of Indianapolis, it was likely Tyler wouldn’t have realized his dream of playing collegiate baseball. And now, Corey gets a second chance at life, happy to see his son take on the next chapter.

“I coached Tyler for 12 years and right when he needed me the most, I was dying,” Corey said. “Corson filled in nicely for me in that role. I can’t thank him enough for taking the time to talk with Tyler because it’s really made a difference in his life. I’m so appreciative that I took that chance to drive Tyler to Indianapolis, because his dreams came true.”