If anything was apparent following the 2015 Under Armour All-America Game weekend, it was that Cooper Johnson is arguably the best catch & throw guy in the country. On my watch during the Friday workout, I had three throws in a row at 1.75 — and each looked like it could have carried right through the 2B bag and hit the center fielder in the chest, his throws are the scouting dictionary example of “on-line carry”. He showed more of the same in the game on Saturday, and was aggressive to throw behind runners — he caught Taylor Trammel too far off the bag at second base in the third inning.

He walked, singled to drive in a run and lined out to second base in three trips to the plate. His third inning single came on a two-strike breaking ball, and his line out in the eighth inning came on a 92 mph fastball — and could have easily ended up as his second single, if not for a nice running catch by Bo Bichette going up the middle. 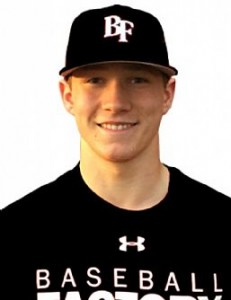 PREVIOUS SCOUTING REPORTS:
A local Chicago area kid, we saw Cooper Johnson in December 2014 at the Under Armour Baseball Factory National Tryout in McCook. His arm strength and catch & throw skills were standout, and he showed the makings of advanced receiving and blocking skills — that would prove to be advanced as well when we saw him at Wrigley Field. An excerpt from that event recap appear below: