The boys are getting after it at our Middle School Cape Cod Select training event this week! 🔥⚾️#playerdevelopment pic.twitter.com/i7E2FKtlMi

Congratulations to the 18U USA National Team on bringing home another international gold medal! This year’s squad went a perfect 9-0 during the tournament with a victory over the host team, Panama in the 2018 COPABE U-18 Pan-American Championship Game on Sunday at Rico Cedeno Stadium. 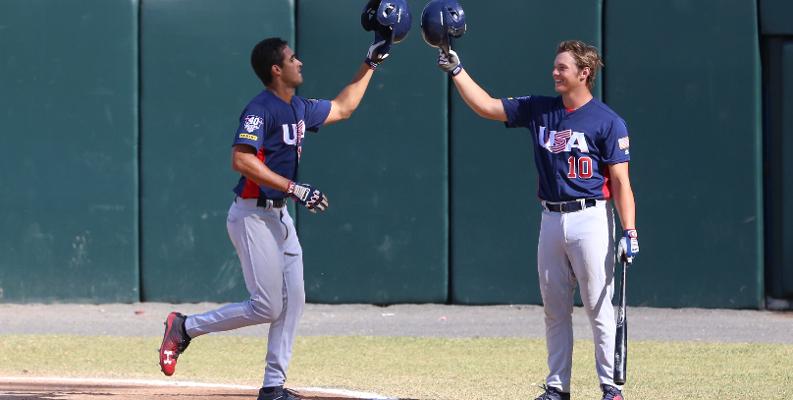 Greene (left) and Callihan paced the offense for USA Baseball.

There were many standout performances from this record setting team, including some very impressive numbers put up by Under Armour All-Americans.

On the mound, Jack Leiter started the final game and earned the victory. For the event, Jack was 2-0 and did not allow a run over eight innings while striking out a team-high 20 hitters. Brennan Malone and Avery Short also posted 2-0 records. Malone had a 1.08 ERA, while Short’s was 2.45. RHP Riley Cornelio also contributed quality innings, making one start and going 1-0 with a 1.29 ERA over his two appearances.

Baseball Factory would like to congratulate Matt Blood on both his new position and his outgoing success! After three years as USA Baseball’s 18U National Team Director, Matt has taken the job of Director of Player Development for the Texas Rangers.

As the Director of the 18U National Team for USA Baseball, Blood finished his three year run in charge of the team with three consecutive gold medals. His teams had an impressive 25-1 record in those three international tournaments. In selecting the final 18U squad, Matt also oversaw the Tournament of Stars, the 17U National Development Program, the National High School Invitational and several other aspects of USA Baseball’s programming.

We have had the pleasure of working with Matt since 2008 when he wrote high school and draft content for Baseball America. Between his time with BA and USA Baseball, Matt worked as an area scouting supervisor for the St. Louis Cardinals in two different southern regions. Matt joined USA Baseball in 2016.

All of us here at Baseball Factory wish Matt the best of luck with the Texas Rangers, and know that he will have a positive impact on their organization.