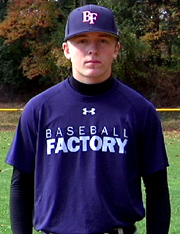 Freshman Mitch Calandra, a catcher/third baseman for the Eckerd College Tritons, was recently named the Sunshine State Conference Freshman of the Year, becoming the first Tritons player to be awarded with the honor.

Graduating last year from Floral Park Memorial High School in Floral Park, NY, Calandra joined the Tritons baseball program and quickly established himself as one of the premier players in all of the Sunshine State Conference. Calandra played in 39 games, making 32 starts and hit .345, third-best on the squad, with six doubles, two triples, one homer and 21 RBI. Behind the plate, Calandra threw out six runners, also sporting a fielding percentage of .939.

It’s not surprising the type of career that Mitch had (as well as his older brother, Nick, see below), gaining the work ethic, drive and determination from his father, Mike, who is a world-renowned Martial Arts instructor.

Calandra has participated in Baseball Factory events since 2010 and was a member of the Exclusive College Recruiting Program. We first saw Mitch as a 13-year old back in 2010 when he attended the Vero Beach Pro Select Training and Competition, flashing his ability as both a catcher and a pitcher at the time.

Nearly a year later, he attended the highly-talented Cape Cod Pro Select Training where he lowered his 60 time from 8.44 to 7.67 and improved his velocity on the mound from the low 70s to the upper 70s. Calandra learned a lot from playing in Cape Cod, being one of the youngest selected to play in the event and held his own against older players.

2012 was a big year for Calandra’s development, attending an Under Armour Baseball Factory College PREP event in Hightstown, NJ and in August of that year, the National World Series at Pirate City. At that point, switching to catcher primarily, Mitch posted a 2.10 pop time with accurate, strong throws and lowered his 60-time even further with improved foot speed (down to a 7.5). In October of 2012, Calandra played in the Arizona Freshman/Sophomore Fall Classic where he went 4-for-11, with a double, triple and three RBI.

As a junior at the Arizona Junior Fall Classic, with another year of catching under his belt and his power growing at the plate, Calandra lowered his pop time further (in the low 2.00 range) and went 2-for-8 with a double and an RBI. Scouts raved about Calandra’s leadership traits behind the plate and his overall mental makeup with his hard-worker mentality and attitude.

“Mitch is as hard of a worker as anyone in the Baseball Factory Program, and it showed in his evaluations in every aspect as he got older,” said Dave Packer, the Player Development Coordinator for both Mitch and Nick. “I am sure Mitch was driven by seeing what his older brother Nick did – Nick also went through Baseball Factory and had a successful career at Tiffin University.”