We work with young players throughout the country every week of the year who all dream of eventually playing in the World Series. It seems that anyone who has ever played the game of baseball growing up has envisioned a scenario where they are either at bat or pitching in the seventh game of the World Series with the game on the line.

A precious few get to put on a uniform and play in the Fall Classic, but it doesn’t always come easy for them. Any player who has attended a Baseball Factory event over the years has heard a coach tell them how difficult this game is, and that they must be able to deal with failure and persevere. For several players on the Dodgers and Astros starting tonight, they did just that. 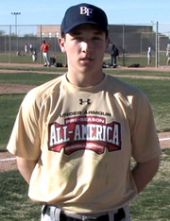 Alex Bregman at the Under Armour All-America Pre-Season Tournament

It is no secret that America League Batting Champion Jose Altuve is an underdog that has had to overcome obstacles and prove that he can play at the highest level. His story of being sent home from a tryout camp in his native Venezuela because he was too small, only to come back again and convince the Astros to sign him, is well-documented. At 5’6”, he is an unlikely hero and a reminder to many that the great game of baseball can be played by people of all sizes.

Altuve’s teammate, Alex Bregman, faced some of those same questions.

Our first look at Alex was when he was a 5’9”, 155-pound high schooler from Albuquerque, NM, who through hard work, became a two-time Under Armour Pre-Season All-American (2010 & 2011). His perseverance led him to become the first youth player – at just 16 years of age – to ever win USA Baseball’s Player of the Year honors, but by graduation, he was about 5’11”/180 and still faced some questions about his size and his tools. Drafted in the 29th round by the Red Sox, Bregman decided to attend LSU where he wore the number 30 as a reminder of the number of teams who passed on him in the first round of the 2012 draft. Alex certainly proved himself in college and became the #2 overall pick in the 2015 draft before racing to the big leagues.

One more Astro who persevered and beat the odds was Evan Gattis.

Out of baseball for several years after high school, and facing much larger personal problems off the field, Gattis returned to the game at the University of Texas-Permian Basin. His renewed success there got him drafted by the Braves and later, onto the Astros, starting his ascent to the World Series – a long way from his previous jobs as a janitor, valet and ski-lift operator.

The Dodgers, too, have a few players that overcame some failure to get where they are today as well.

Rich Hill has played for nine different Major League organizations, and even made two starts for the Long Island Ducks in 2015 (ten years after his Major League debut). Going from Independent League baseball to the World Series is quite a display of mental toughness and desire. All-Star closer Kenley Jansen wasn’t always lights-out. In fact, he wasn’t even signed as a pitcher. After four and half seasons as a minor league catcher with a strong arm and a light bat, Jansen was open to the position change that changed his career.

For some guys, success in this game comes easily for them. For the vast majority, the game of baseball is a humbling journey of overcoming failure and persevering. For the players on the Dodgers and Astros, that journey takes them to the World Series tonight.