May 29 Factory Athletics NewsShare This Article 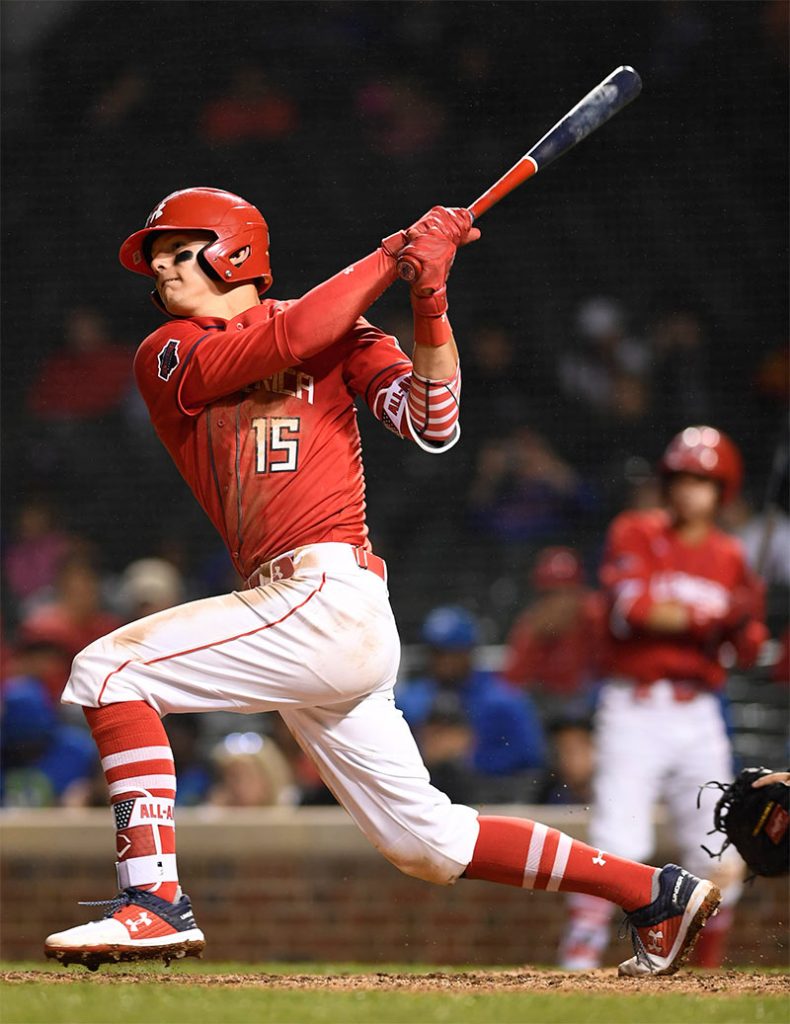 Two-time Under Armour All-American and potential first round draft selection in the 2019 MLB Draft, Bobby Witt Jr. has been named the Gatorade National Baseball Player of the Year for the 2018-19 season.

Baseball Factory’s Matt Lund had an exclusive interview with the top prospect on different topics, including, his time with the Baseball Factory and at the Under Armour All-America Game, being a leader at Colleyville Heritage HS, special relationship with his Dad and former major league pitcher, Bobby Witt, his work in the community and more. 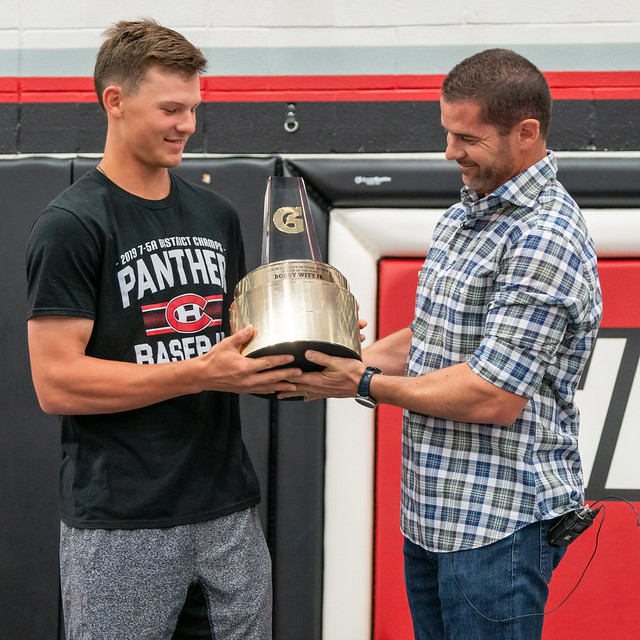 Witt is presented with the Gatorade Baseball Player of the Year award by former Texas Rangers infielder, Michael Young.

Matt Lund: Congratulations on being named the Gatorade National Baseball Player of the Year for 2018-19. It’s an award that’s well-deserved after seeing you grow as a player at Baseball Factory events the last few years, what does it mean to be selected for this honor and be included in among the likes of a Zack Grienke, Clint Frazier in baseball and Peyton Manning in football, among others?

Bobby Witt Jr: It’s truly an honor and a blessing to get the opportunity to receive this award. It’s something I’ll never forget. It’s dedicated to the community, all my teammates, coaches and all the teachers and support group I’ve had… my family as well.. it’s awesome to have them by my side, so it’s something super special.

ML: You’re outstanding on the field but you’ve also spent time doing great things off the field… a member of Students Stand Strong and Colleyville Heritage’s Fellowship of Christian Athletes chapter, you’ve volunteered by helping the homeless on behalf of Phillips Wish and by combating bullying in association with Rachel’s Challenge… how have those types of initiatives helped you gain a better perspective on life outside of baseball?

BW: It’s really helped me so much to put smiles on other people’s faces, and then, knowing that some of those people aren’t as fortunate as I am, so it makes me want to continue working hard and work for them too as well. I can go out and play for them or help them out, so it helps make me enjoy things better to see them happy.

ML: Tell me about the excitement of leading your Panthers squad to a potential first championship in school history? What would it mean to you to be part of that?

BW: That’s the goal… we play Friday and Saturday and if we win, we move onto the State Semifinals, if we win that, we’ll get to the final game, so four more wins for us and that’s the goal.

ML: I’m sure that’s being echoed across the locker room… four more wins… what would it mean to be part of that to be the first baseball champion in school history?

BW: It would be something super special because ever since I was little, I’ve grown up, coming to the games. Coach McDougal has always been there for me, coming up to the camps… getting to play from my freshman year to now… this team we have is senior-heavy and all of our teammates have bought in and the community comes out to support us. It’s going to be a lot of fun to go out with a bang and to try and get that ring would be a lot of fun with these guys.

ML: You were a two-time Under Armour All-American in 2017 and 2018… you homered in last year’s game… what did those events mean to you in terms of being recognized for your play on field and as one of the top amateur players in the country?

BW: It was truly an honor to be part of those two games, going out to Wrigley Field and meeting all those guys… you start forming bonds… that’s something people dont really understand… you could play with them for one game or play with them for one weekend in Chicago and you’re best friends with them probably for life. I still keep in touch with all those guys and its something super special and that’s what baseball has for you and why I think it’s the greatest sport out there.

ML: Besides the All-America Game, you participated in a number of Baseball Factory events, namely the Under Armour All-America Pre-Season Tournament in 2018 where you impressed everyone with your skills but also your leadership and setting good examples for your teammates. What has Baseball Factory meant to you in terms of opportunity and what you’ve learned through the coaching staff you worked with at each event?

BW: It’s been awesome, they have a great coaching staff and they’ve always helped everyone. Seeing the events that go on, through social media and getting the opportunity to go to events has been awesome to do that. They’ve helped me through a lot and I’ve learned a lot going to the events. They’re doing great things in the baseball world and so it’s awesome to have a company like that out there for other athletes.

ML: Your Dad Bobby Witt pitched 16 seasons in the majors…. I know he’s helped guide you to where you are right now and has had a big influence on your life, what lessons has your Dad taught you in the correct way to carry yourself on the field and how to handle the next steps in your career and life?

BW: He’s been there for me, always, like a teammate and a friend. Being my dad and a role model for me, always throwing BP to me and pushing me hard and just being there for me, no matter what, keeping me on the right path. Having him as a resource is truly amazing to be able to ask him anything, watching baseball. It’s amazing to have him in my life.

ML: You’re carrying a 4.0 GPA in the classroom also. For younger athletes who may be reading this article, can you give them advice on what it means to excel in school and be a true student-athlete?

BW: Show up on time, sit in front of the class. If you’re there, you gotta be listening. If you’re listening, you’re learning. Turn in your assignments on time, respect your teachers and classmates and you’ll get the job done.