On Sunday, January 25 the Under Armour Baseball Factory National Tryout tour rolled through San Diego with a stop at the Francis Parker School baseball field.

In the morning session, a pair of two-way guys stood out.

2016 3B/RHP Adam Lopez (Grossmont HS – Spring Valley, CA) featured easy defensive actions with arm strength, and he hit hard line drives to all fields with power to the opposite field gap. He topped at 82 mph with his fastball.

6-foot-2 185 pound Zachary Sherman (2016 – 3B/RHP – Ramona, CA HS) showed sure hands along with quick defensive actions to go with a very strong arm across the infield. He flashed some raw power thanks to a combination of bat speed and strength through contact, and has a chance as a two-way guy in the future. His fastball was 82-84 with late arm side run, while his breaking ball had sharp 11-5 action in the mid to upper 60s.

In the afternoon session, the standouts appeared on the other side of the infield at first base.

2016 1B Martin Valencia (Citrus Hill HS – Perris, CA) featured quick hands to hit, and made hard contact to all fields – with power from gap to gap. During his defensive workout, he proved to be a solid defender at first base.

At 6-foot-1 and 205 pounds, 2016 1B Nick Gallardo (Scripps Ranch HS – San Diego, CA) was more than just a good target. He featured good body control along with smooth actions and good hands. At the plate, his move was coordinated and he was able to whip the barrel through the zone with accuracy and a knack for hard contact.

Alex Lopez, a 2016 grad from Shadow Hills HS in Indio, posted the low pop time on the day with a 1.87. His catch and throw skills are clearly advanced, while he has the athleticism in his actions to develop into a complete defender behind the plate. Somewhat the opposite of his defensive actions, at the plate his approach was simple and under control. His right handed stroke was loose, and he applied bat speed through a good path to produce hard contact from gap to gap. 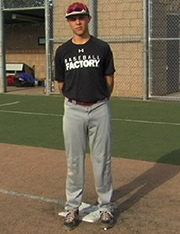 Alex Lopez, a 2016 grad from Shadow Hills HS in Indio, posted the low pop time on the day with a 1.87. His catch and throw skills are clearly advanced, while he has the athleticism in his actions to develop into a complete defender behind the plate. Somewhat the opposite of his defensive actions, at the plate his approach was simple and under control. His right handed stroke was loose, and he applied bat speed through a good path to produce hard contact from gap to gap. 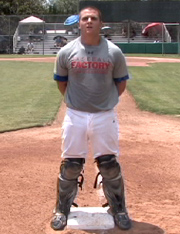 Over the course of four events between September 2012 and January 2015, C John Mackay (2015 – Ramona, CA HS) has improved literally across the board. His progression was not sudden, or due to a good workout on a single day, but slow and steady – as it is, and should be, in most cases.

He was an advanced young player with solid tools when we first saw him in September 2012 at the Azusa, CA Under Armour Baseball Factory National Tryout. From there he attended the 2012 Baseball Factory Christmas Camp & Tournament at Pirate City, and then came back out to a Under Armour Baseball Factory National Tryout in San Diego in January 2014 where he qualified for the 2014 Team One West Showcase. It was there that he posted half-grade improvements in his hitting ability and raw power, while still maintaining his low 2.0 pop times and solid fielding ability.

Most recently, he posted markedly improved fielding ability along with modest improvements to his raw velocity and arm strength. His release is short and quick, and his throws are accurate on the bag as low as 2.03. His lateral movement to block is very good, as are his hands to receive. At the plate, the coordination between his hands and the rotation of his core allows for a combination of hitting ability and raw power. His prep action and balance indicate some level of polish to his offensive approach.

2016 SS Trevor Rosenberg (Carlsbad, CA HS) featured advanced body control in his ability complete plays from a variety of arm angles and positions with his body. He stayed down low to play the ball, and featured a quick release and an accurate arm. He kept his head quiet to hit, and rotated his core well to setup a coordinated move through the zone.

Only a 2017 graduate, Zach Sehgal (La Jolla, CA HS) stands at 6-foot-1 and 170 pounds with room to fill out. He too showed standout body control, along with rhythm and ease to his footwork that allowed him to generate momentum through his play on the ball. At the plate he showed advanced bat speed, and applied it through a loose swing to produce hard contact from gap to gap. His 30 yard dash of 3.87 was the fastest of the day, while his 60 yard dash of 7.16 was in the top five.

A Pair of Dylans

Though he was listed on the roster a pitcher only, he proved during this workout that he is much more than that. 2016 Dylan Spacke (Ramona, CA HS) swung the bat with authority from both sides of the plate, and offered proof of a legit hitting ability & raw power combination during his rounds of BP – certainly a combo that he should have a chance to apply in game at bats.

It’s easy to see why he spends the majority of his time on the mound though. His fastball had arm side run in the 82-86 range, and went with an 11-5 breaking ball with depth in the low 70s along with a low to mid 70s change for which he showed good feel. From a slot nearly over the top, he got downward angle to his pitches, while the simplicity of his delivery allowed him to repeat his release point and stay around the plate during his bullpen session.

2017 two-way guy Dylan Aronne (OF/LHP – Dana Hills HS – San Juan Capistrano, CA) is another interesting young player. A “backwards guy” on paper (bats right and throws left), he proved that not to be the case with a well-rounded set of tools and athletic actions all over the field.

His 30 yard dash of 3.94 was among the fastest of the day, as was his 7.09 60 yard dash. His first step was true in the outfield, while his arm was accurate. At the plate, he featured bat speed and had the strength through contact to produce hard contact with backspin to carry into the outfield gaps. On the mound, he worked with an 81-82 mph fastball and an upper 60s breaking ball. His delivery was compact and he was able to drive his fastball downhill.