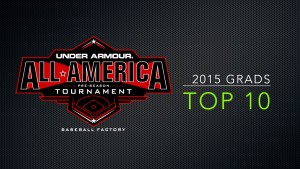 It isn’t very often we see velocity increases of 7 mph in less than one year, but this group holds three such instances. All three pitchers posted respectable fastballs in the 84-85 mph range at 2014 Under Armour Team One Tournaments, and all three went on to record low 90s fastballs in January 2015 at Cubs Park. Right-handers Christian Straub and Ernesto Pino touched 93 and 92 respectively, while left-hander Steven Gingery topped at 91 mph.

With five of the ten players on this list, California is well-represented. Though this group is heavy on pitchers — with six of the ten listed “pitcher only” on the roster — every position except catcher appears at least once.

Appearing below are the Top 10 players from the class of 2015.

Karsen Lindell worked from a polished, low effort delivery to command a high quality three-pitch mix. He topped at 93, and commanded his fastball to both edges at 89-91. His breaking ball had sharp 11-5 shape between 74 and 79 from his high three-quarters arm angle. He showed good feel for a low 80s change, completing his arsenal of three pitches with different action and with differing velocities.

He maintained his velocity through three controlled innings of work, totaling five strikeouts against two walks and two hits allowed.

When we saw him at the Under Armour Southwest Championships in July of 2014, Steven Gingery worked in the low 80s with sound mechanics and a loose arm. Less than six months later in Mesa, he ran his fastball into the low 90s — marking a top end fastball jump of seven miles per hour.

While the fastball velocity improvement is impressive, it’s his ability to command a quality three-pitch mix that makes him a legitimate prospect. Though his secondary offerings were a little soft in terms of velocity — around 70 mph — both his curve and change had life in the zone and were thrown with a fastball arm stroke. With hitters forced to honor his ability to land the off speed stuff, his fastball ended up playing even firmer than the radar gun indicated.

Adding to the dilemma for hitters was a slow and gradually building delivery — he took his time to balance, only to generate startling arm speed once his palm turned over and began to the plate. Through three controlled innings of work, he recorded five strikeouts — including a dominant stretch of three in a row to start his second frame.

Christian Straub is another among this group to make a huge velocity jump in a short period of time. At the Under Armour So Cal Classic in October 2014, he worked his 83-85 mph fastball to both sides of the plate. About three months later in Mesa, he bumped 93 early in his outing before settling in the upper 80s as he went along. His breaking ball went from a low 70s rolling downer to a mid to upper 70s offering with extremely sharp action and flashes of power.

He was very aggressive to the plate, with big arm speed and a finish around to the first base side of the mound. There’s no arguing his stuff, it was as good as we saw from any pitcher in Mesa — if not the best overall. The concerns with landing and front leg issues usually center around control, but he quelled those this outing. It would be a stretch to say he commanded anything, but he had no problem throwing a high volume of fastball strikes and he was around the plate with both secondary offerings such that hitters had to account for his ability to change speeds.

Vincent Byrd has an immense frame at 6-foot-7 and 250 pounds, with wide shoulders and fill through his lower half. I heard some of our scouts throw out Tony Clark as a comp, and I heard some others call him a taller (and right-handed throwing) version of Ryan Howard. The simple fact here is that there aren’t very many baseball players with his size, and even fewer are left-handed hitters.

Just standing 6-foot-7 isn’t enough however, and Byrd does much more than that. He has natural lift to his left-handed stroke, and gets the ball in the air to the pull side with ease. His move is loose and easy, such that he creates bat speed without much effort, and the ball gets off his bat with noticeable life. He hits from a wide base and has a simple trigger, allowing for consistent delivery of the barrel. Defensively, he isn’t as natural as he is with the bat — but he moves around just fine and he has some feel with his feet around the bag.

Standing a wiry and long-limbed 6-foot-3 and 180 pounds, Robert Ay featured an advanced three-pitch mix. He worked from a fluid delivery to generate arm speed with what appeared to be minimal effort. His fastball topped at 89, and worked consistently in the 87-88 range with good downward angle and some tailing arm side life. From his high three-quarters arm angle, he spun a downer breaking ball with some tilt around 70 mph, and turned over his upper 70s change for some tailing sink. All three pitches were thrown for strikes, forcing hitters to account for a change of speeds as well as his ability to drive pitches down through the zone. He is set to attend Cal Poly, in the Division I Big West Conference.

Karre is a versatile player with the ability to play in the dirt and the grass, in addition to being a switch-hitter. His actions appear to be more natural in the outfield, where he moved with more fluidity and purposeful angles. His arm played better in the grass as well, where he was able to generate and translate momentum through the ball into long carries. At the plate, he generated bat speed from both sides of the plate but appeared to have more body control and more natural actions right-handed.

Jonas Wyatt was among three right-handers to touch 93 mph, and did so with a relatively short stride and without much finish out front. His delivery had good sequence early, allowing his arm to work from the glove to reach a good position at landing. From there, he was able to generate some plane on his fastball and created tight spin on his low 70s breaking ball. He relied mostly on his fastball this outing, working right around 90 – with as many 89s as 91/92s. His general look and feel was one of ease, as if it didn’t take much to generate the stuff he produced.

In June 2014 at the Under Armour Southeast Championships, Ernesto Pino was 82-85 with command of a low 70s breaking ball and a mid 60s change. In January 2015 at the Under Armour All-America Pre-Season Tournament, he was 88-92 with command of a mid 70s breaking ball and a low 70s change — his velocity had improved by 5-7 miles per hour on each of his pitches in about seven months.

His fastball-curve combo was an effective one, setup by his ability to pitch both inside and up in the zone with his fastball. His change offered an option to turn pitches over and away from left-handers, giving him options to retire both left- and right-handed hitters. He did a good job of getting ahead early in counts, and maintained an aggressive approach to challenge hitters in the zone with his best stuff.

Rickie Garcia offered two-way ability as a slick fielding third baseman with an upper-80s fastball on the mound. He featured sure hands along with great feet and body control, such that he was able to adjust his release and arm angle to complete a wide variety of plays — qualities that helped him standout as among the best defensive third basemen in Mesa. At the plate, he made a coordinated move through the zone with late whip — resulting in loud contact during his BP rounds.

Among just seven 2015 pitchers to reach 90 mph, he worked around 87-88 and touched 90 a few times. He spun an upper 60s breaking ball, and mixed in some upper 70s changeups — both solid secondary offerings with potential to develop further. His delivery was balanced and in coordination with his arm stroke, allowing him to consistently compete in the zone with his fastball.

Vincent Addona combines physical skills with instincts and awareness, allowing for usable tools both offensively and defensively. His left-handed stroke was loose and full through the zone after a quick move to contact, allowing him to hit the ball where it was pitched — and to drive the ball with some authority from the pull gap to the pull line. He ran the bases aggressively and instinctually, allowing his speed (7.03 60 yard dash, 4.40 home to first) to play between the lines. Defensively, he moved light on his feet and showed plenty of arm strength to turn the double play from the 2B side of the bag.