In Chicago, Austin James showed a combination of defensive versatility and raw power that likely piqued the interest of many evaluators in attendance. In the preliminary round of HR derby qualification, he notched just a single blast — but it was enough to earn him a captain’s pick into the semi-final round on Saturday at Wrigley, where he left the yard three times. In the game, he handled himself well on both sides of the bag, including a highlight reel barehanded play coming in on a soft chopper from 2B. 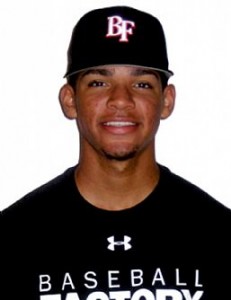 PREVIOUS SCOUTING REPORT(S):
Following some late summer showcase circuit buzz, we saw James for the first time in September 2014 at the Under Armour Futures East Showcase.

James has athletic features on a slender build at 6-foot-1 and 180 pounds. He is a naturally gifted defender in the infield with skills suited for SS potentially at the highest level. He exerts minimal effort to complete both routine and off balance plays, thanks to a combination of quick and efficient feet and instinctual catch and throw skills. He generates momentum thru the ball towards 1B, and gets the ball from his glove into his throwing hand quickly and simply. His actions are crisp and precise, and he maintains excellent body control on the run and off balance. At the plate, his approach is simple and under control – much like we saw defensively. He is extremely quick with his hands to contact, and he maintains strength thru contact – allowing him to drive the ball with a wood bat. He delivered hard line drives up the middle and the other way, and was able to get the ball up in the air to the pull side for backspin. He was aggressive in game at bats, ready to swing at strikes early in the count. With improved pre-pitch rhythm in his hands, he should be able to maintain more strength on off-speed pitches. He is an exciting talent – an advanced defender at SS with a projectable combination of hitting ability and raw power.